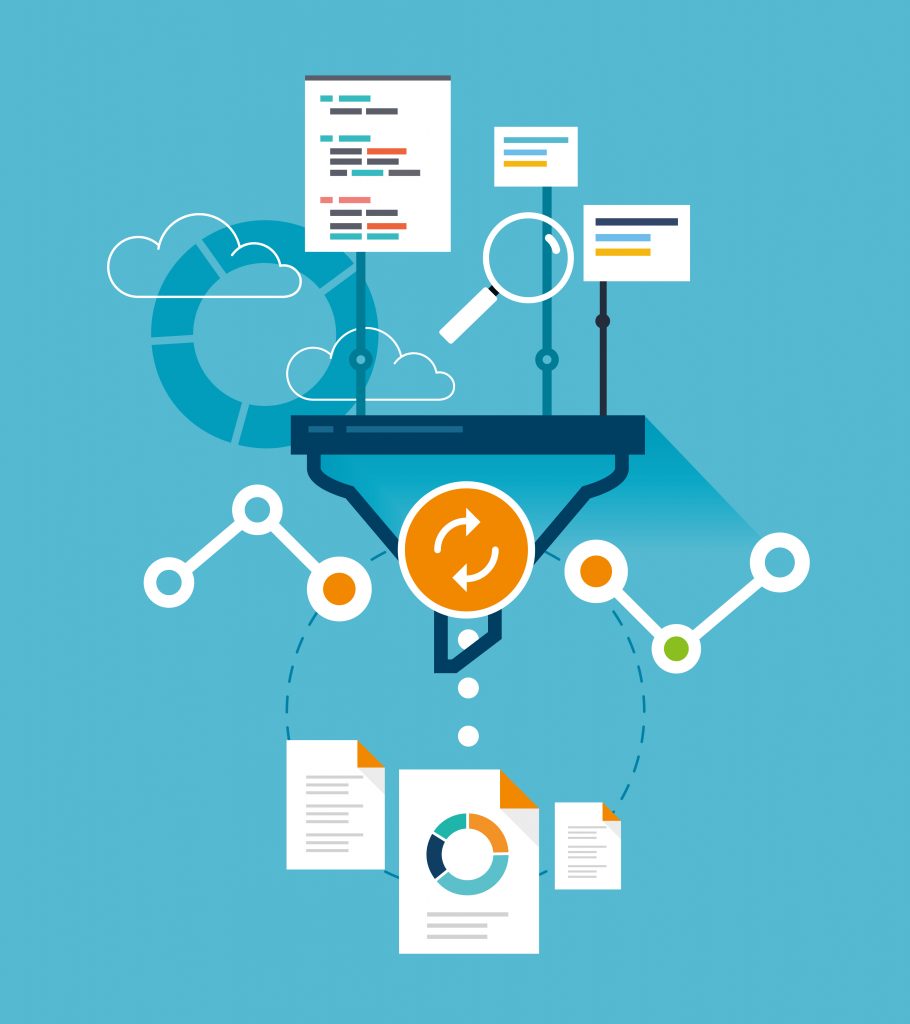 You know how when you have to do something new, you learn as much as you can about it and become completely obsessed?

The good news is, you’re about to learn from my obsession, which is how to create marketing a funnel for Facebook advertising that lead to sales.

To do this, for the past year, I have studied the masters: Jeff Walker, Danny Iny, and Scott Oldford.

I have taken their courses, I have read their books, I have subscribed to everything I can get my hands on, and I’ve consumed (I hate that word) every piece of content on the topic.

And I’ve taken everything I’ve learned and drilled it into one simple graphic (I’m not a designer, but you’ll get the gist): 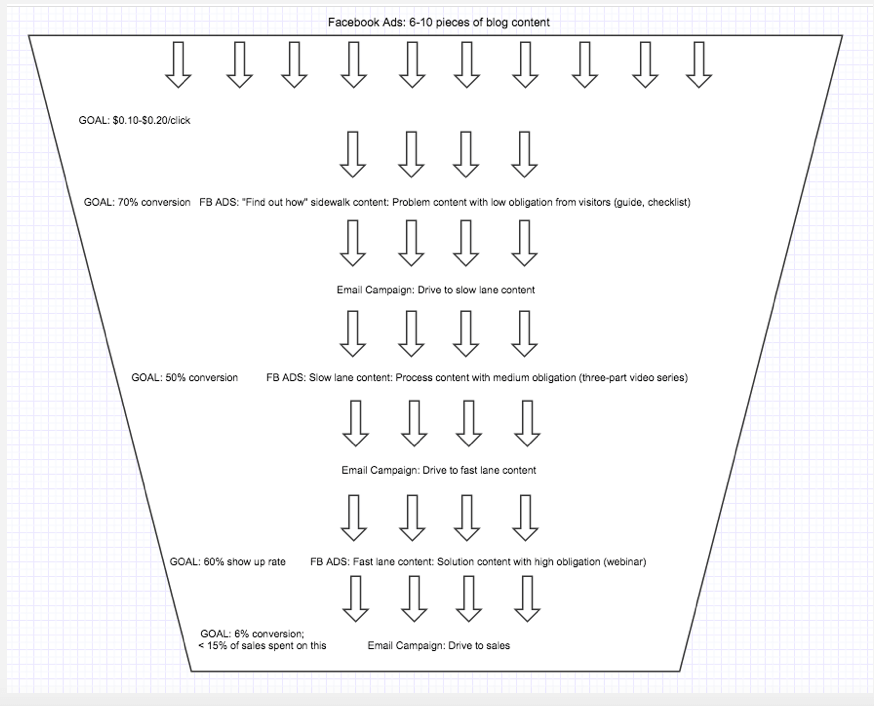 You’ll notice there are content and ads and there are goals.

We practice what we preach around here and everything is tied to revenue.

But, what the heck does all of this mean?

Let’s break it down.

At the very top of the marketing funnel, you have blog posts.

Though I have six to 10 up there, I recommend starting with only two or three to get started.

Create landing pages with that content and a specific call-to-action (ours is “subscribe to Spin Sucks“), and build ads that drive to the landing pages.

You also can drive ads to specific content that isn’t on a landing page, if there is a very clear call-to-action.

While every blog post here has an opportunity for people to subscribe, the conversion is very, very low because we’re all so accustomed to glossing over that.

On a landing page, you have two options: Subscribe or go on to the next piece of content we’ve chosen for you.

Start with a few, test, test, and test some more, and then add more ads.

You can see our goal is to pay less than $0.20 per click. The only way you’ll reach that goal is to test daily. It’s not a small undertaking, but it’s worth the effort.

This content requires a low commitment from your audience and has a “find out how” message—Find out how to build a community of nearly 50,000 readers.

You’ve seen this type of content everywhere, but it can be something such as a checklist or a guide.

We use the Spin Sucks workbook, which is a nice accompaniment to the book, but can also be used alone.

Now, here is what is most important: The ads for your sidewalk content will be served up to the people who have already clicked on your top-of-the-funnel content.

I know that seems counter-intuitive because you already have their email addresses, but what you’re doing is providing value and giving lots of content for free to the people who have already been introduced to you.

You wouldn’t want someone who doesn’t know you to get the sidewalk content (or anything that comes next) because they’d be coming in in the middle of the marketing funnel and it’d be confusing. 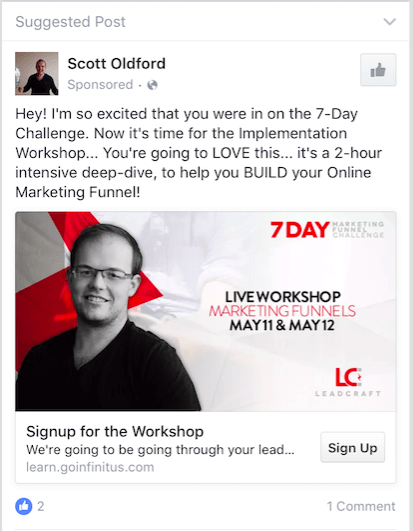 See how he says “I’m excited you did this. Now it’s time for that.”?

The goal is to convert 70 percent here because the audience already knows about you and is primed to keep learning from you.

This requires a medium commitment from a reader, which means it’ll take them six to 10 minutes to consume it.

Consider something such as a three-part video series here.

Using the same philosophy as above, you’ll retarget anyone who has clicked on your sidewalk content ads.

Now you’re pushing them further into the marketing funnel and the commitment from them is becoming larger, so you can expect to convert about half—or 50 percent.

This requires a pretty big commitment from a reader, which means it could be an hour or longer of their time.

Consider webinars, eBooks, research, or white papers here. Studies have shown that video works slightly better, but if that’s not something you’re comfortable doing or don’t already have, go ahead and use text-based content.

Using the same philosophy as above, you’ll retarget anyone who has clicked on your slow lane content ads.

Now they’re even further into the marketing funnel so the goal is not so much conversion as it is getting people to show up to a webinar (60 percent) or download an eBook and read it (which you track through software, such as HubSpot or Infusionsoft).

NOW you can drive someone to sales, which could be an online course, software, packaged services, shoes, wine, dessert treats, a mastermind group, membership site…really anything that you can sell via ecommerce.

You can expect a six percent conversion from the people who took your fast lane content to actual sales.

Warning: Six percent won’t come immediately. You’ll most likely have a one to two percent conversion the first time out.

By the end, you’ll have spent 10-15 percent of your revenue made from this on Facebook advertising.

And, if those are your only costs (minus the time to do all of this work), that’s not a bad return-on-investment.

The last part of your marketing funnel are your email campaigns, which you can see lie in between each step in my beautiful graphic above.

This is an entirely different blog post, but the general idea is, while you’re creating ads and serving them up on Facebook, you’ve also created a series of emails for each step in the marketing funnel.

It may seem like overkill, but trust me…people need to see a message in several different locations before they pay attention.

So say you write something on the blog about your new slow lane content, then you do a series of emails, and then they see your Facebook ad, that’s when they’ll click to learn more.

You will have some people unsubscribe. You may even have people complain. But that’s okay. You only want people in your list who are great prospective customers.

And now it’s time to get to work!

What questions do you have?

P.S. This assumes you’ve already added the Facebook pixel to your website, have a fairly good idea who already buys from you, and already have an email system up and working. If you can’t say yes to all three of those things, do that work first.