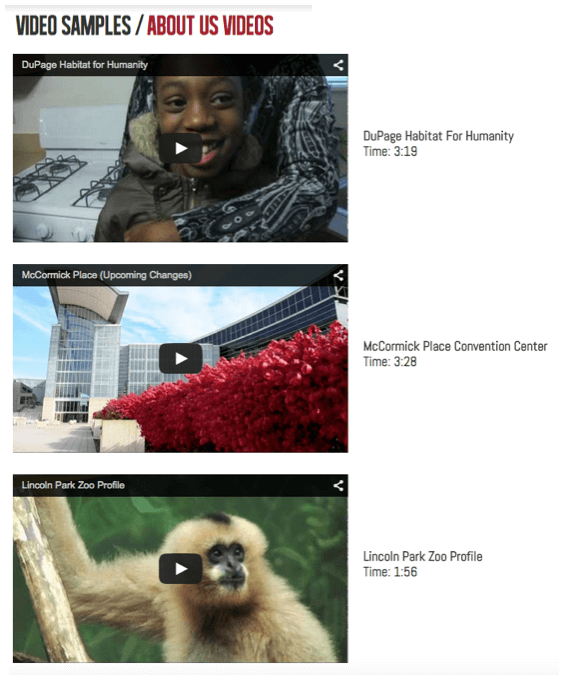 I know I do, which is why one of the greatest services I feel like I can share with people is helping them find ways to cut costs on their PR and marketing videos.

You’re a video producer who helps people cut costs on their marketing videos!?

I don’t really work in a business that’s known for transparency in pricing, but it’s important for people to know what goes into making a marketing video and its production cost.

Part of providing that transparency is also helping to save money. Video can cost in the tens of thousands of dollars, but you can also produce a great video for much less.

Our typical marketing videos cost about $6,000.

Wow, I’m such a great guy… helping people save money.

Oh, wait, I guess I should probably reveal my motivation. Shhhh. Don’t tell anyone else.

The more people save on producing their marketing videos, the more likely they are to want to produce more.

The more marketing videos they produce, the better the results are for their communication strategies.

This whole thing is pretty beneficial to me, the video producer.

Let’s get started saving you some money.

You’d be surprised how many people don’t shop around when they select their video producer. I think there are a few reasons.

First, it’s kind of daunting. There are a lot of us out there.

Next, there’s no set way for how to differentiate us from one another. You’re not comparing one widget to another. Video is very much an art, so it’s subjective.

Finally, some producers give people a real runaround on price. It’s hard to nail them down.

If you call a company and it’s hard to get a ballpark quote from them, look elsewhere. There are plenty of us who want your business, know you have a budget, and are happy to give you an estimate based on your initial details.

Prices vary so much from company-to-company that you’ll likely find a wide range of prices. And, while I don’t think price should be the lone determining factor in who you choose, if you shop around, you definitely will save a few bucks and find the company with the right artistic vision for your company’s needs.

One of the big reasons marketing videos can get expensive is the equipment that’s used. Cameras, lights, microphones… the list goes on and on.

Not to mention the time involved with creating things like special music and graphics. There are all sorts of bells and whistles that can drive up the cost of your video project.

In many cases, you don’t need them.

Trust me, I love big-time bells and whistles. The camera starts up high and descends on a crane down to our subject matter. A Steadycam operator follows alongside them as they walk. An editor drops in a newly designed special effect during post-production.

But, in many cases, you don’t need that stuff.

No doubt, viewers like bells and whistles, but they rarely remember them later.

You know what they do remember?

When someone has told them a good story.

Focus on telling a great story and leave nonessential bells and whistles behind.

You’ll end up with an effective video and you’ll save money along the way.

One of the great things about video is the more you produce, the better their effectiveness.

That’s one of the many reasons I recommend producing a series of short marketing videos instead of a single, longer one.

Beyond that, it’s also a great way to save money.

We have a client who understands the power of video and uses it as a big part of their content marketing strategy.

That isn’t unusual, a lot of businesses use marketing videos in this way.

The difference is many of them do it piecemeal.

The problem with that method is you pay full price for every video.

What I tend to suggest is putting together a contract for several marketing videos at once.

If you know you’re going to produce three marketing videos over the course of a campaign, ask your producer if they’d be willing to apply a bulk discount for bundling all three into a single contract.

As a video producer, it’s easy for me to find savings in that situation.

For example, every time we have a contract for a single video, I’m going to plan at least one shoot for that video.

However, if we have a contract to shoot a series of three marketing videos, I might be able to schedule two shoots to cover all three. One less shoot is money in our clients’ pockets!

Planning for a series of marketing videos is efficient. Efficiency brings savings with it.

Video is an awesome way to communicate and tell stories.

It’s no longer a luxury.

It’s something our content audiences crave. Thankfully, you can create marketing videos on a budget… and do it well!