This past Saturday morning, I was tagged (along with six other friends) in a Facebook post by Danny Brown.

In it, he questions why Oracle Social, which launched their page just a mere five days prior had 456,000 likes (it’s now more than a million in six days).

I took a stroll over to the Oracle Social page and, thankfully, I was not one of the more than million people who “liked” the page in less than a week, but there are 66 of my friends who have, even though they clearly said they have not.

So what’s going on? How does a page have that many likes in less than a week? Is it paid likes? Or is it something else?

It’s pretty easy to get through their page. As of this writing, they have only four posts: An update of their cover photo, an “apology” for the “abrupt transition” to the page, an update about an event in Las Vegas, and a welcome to all their fans.

I also noticed it is impossible to post on their wall, unless it’s in the comments section of something they have posted.

So how is it they have more than a million likes in less than a week?

According to them, it’s because they acquired Collective Intellect, Involver, and Vitrue this year and were merging the pages. 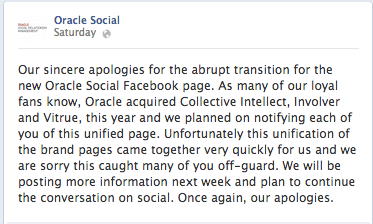 Which is all fine and dandy. Some organizations have deep pockets and can partner with Facebook and merge their fans.

More power to them.

So, why then, are so many people saying they’ve never liked any of the four pages?

Danny outlines three scenarios in a blog post he wrote about this on Saturday. He said it could be: They bought the likes, they paid Facebook to create a large fan base for them, or they were merging accounts.

He wrote the post before Oracle said they were merging the accounts so it’s likely they’re not making it up. Could it be people just don’t remember liking one of the four pages and were shocked when Oracle Social showed up in their stream?

What Oracle Should Do Now

As of this writing, there are nearly 500 comments from unhappy people questioning why they are a “fan” of this page or simply stating they were a fan of one of the companies Oracle bought, but because of the way this was handled, they’re unliking the page.

To the credit of Oracle, someone from their company has been jumping into the comment streams to apologize and interact with fans.

I don’t really love the “hope you will stick with us” comments from a company whose customers are social and digital media experts, but it’s definitely better than ignoring the feedback.

Oracle needs to do a few things immediately:

We’re nearly six years into social media. It’s been long enough these kinds of mistakes should no longer happen…especially from a company that works in the business.

Update: As of 8 p.m. ET on November 12, Oracle Social wrote a blog post about what they learned when they merged their Facebook accounts.