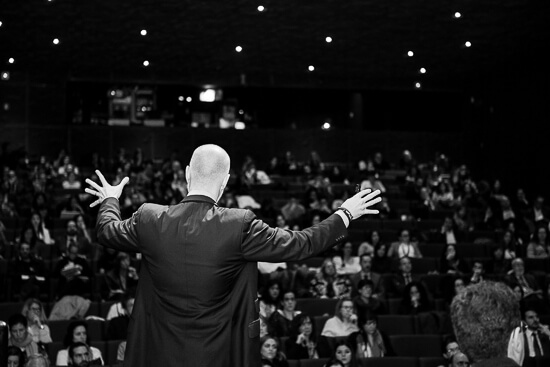 Take a minute to imagine getting a new client.

You’ve worked hard to get to that stage, and now you’re ready to sign the contract.

Then the new client stops you in your tracks with these words:

OK, I’m ready to have you do your thing for me. But you’ll need to pay me first.

You look at them, surprised, wondering if you heard them right.

So you ask the obvious:

You shake your head incredulously, and wonder when your expertise became whittled down to you having to pay to do the thing you were invited to do in the first place.

Not according to the organizers at the Social Shake-Up Show, one of many social media conferences being held in Atlanta later this year.

I received an email from one of the event’s organizers, asking me if I was interested in speaking.

Or at least, I thought I did.

Turns out, it wasn’t quite that simple.

Here’s the body of the email:

Are you interested in speaking at the 2017 Social Shake-Up Show on May 22-24 in Atlanta?

500+ decision-makers will be in attendance, so it’s the perfect platform to discuss your latest product or to display thought leadership in front of a forward-thinking social media community.

Standing at the podium and delivering a powerful message in front of your peers validates the countless hours that you and your team put in at the office.

Our agenda is filling up quickly and I thought you might be interested in taking one of the remaining spots.

These open speaking spots are reserved for Social Shake-Up sponsors, so email me directly if you’d like pricing details.

Along with the speaking opportunity, you’ll receive all the benefits of being a Social Shake-Up sponsor.

If you’re interested, please contact me as soon as possible, as rates for our speaking spots increase after Jan. 20.

Let’s Break that Down, Shall We?

The introductory paragraph is nice enough.

It tells me about the event, and that 500+ decision-makers will be in attendance.

Although, in fairness, my four-year-old daughter and six-year-old son make decisions every day.

Like how much mud to roll in and how many times they can fit poop into a sentence at dinner time, so maybe that’s not such a selling point after all.

Then it goes on to sell me on presenting myself as a [cough] “thought leader” to these important people.

The second paragraph is where it gets fun/confusing/painful, depending on your point-of-view.

Standing at a Podium

To recognize all the hard work I’ve put in, honing my craft, building my expertise, and keeping me and my team in the office while our children are growing up and our lives are disappearing around us, I get to STAND AT A PODIUM!!!!!

See how excited I was by this revelation?

I had to use all caps to get the gravity of that offer in full.

Well call me Shirley and pour me a double!

Never mind the gratitude of clients, peers, or bosses for any successful project or undertaking—a podium is where it’s at!!!

After that bombshell, I could hardly wait to see what more this event could possibly offer me.

You want me to sponsor your event, and that will let me get to the podium?

Can’t I just bring my own podium?

So…to be clear…one of the organizing/sponsorship team for the event invites me to speak, but not as a speaker.

Instead, it’s as a sponsor, and by sponsoring the event I’ll get to be a “speaker” (albeit at a podium)?

Well, of course, I had to reply…

So, just to clarify—you want me to speak at your event but I have to pay to do so?

On top of, undoubtedly, paying my own expenses for hotel and flight?

And the “benefit” of this is I get to “stand at a podium”?

Is the podium a time machine, like the Doc’s DeLorean?

Because then I could see value in your proposal.

Or is it like that podium from the original Police Academy, because that looked like a rewarding podium!

I’m a firm believer that possums make for great photo opps, so I could see the benefit there. Though I think you might have meant “stand beside a possum,” as opposed to at.

Anyhoo… Please advise if any of these scenarios are true.

Otherwise, I’ll have to decline before I have a laughter-inflicted hernia due to the ridiculousness of your “proposal”.

Yours in eagerness (especially about the DeLorean!),

Someone Who Places More Value on Time, Expertise and Knowledge Than a Pay-to-Play Podium Slot

Or, in the immortal words of Mary Poppins:

Why do you always complicate things that are really quite simple?

You Say Exposure, I Say Tell My Kids Why They’re Hungry

There’s a commonly-held belief that exposure is a wonderful way to avoid paying for expertise.

This can usually be seen in two forms:

Or, you can go the Social Shake-Up route and make people pay to be a sponsor in lieu of giving them a speaking slot.

The first two are crappy enough.

Yet their business model is to get the majority of its writers to produce content for free, in exchange for eyeballs on their content.

Events—especially social media conferences—charge upwards of a few hundred dollars to attend, to almost $2,000, and beyond.

They have a bunch of sponsors, and they generally have anywhere from a few hundred one-day attendees to several thousand during the course of two to three days.

And yet, they’ll only pay the “top-tier” speakers.

But then you have the Social Shake-Up approach.

There are many reasons it’s wrong, and—to me, at least—unethical.

But here are the core ones:

Now, don’t get me wrong.

Some Social Media Conferences DO Get it Right

There are some fantastic social media conferences that not only deliver value, but treat their speakers with the respect they deserve, and pay them for their time and expertise.

These are the ones you should support, and the ones I don’t mind attending.

The ones that are essentially saying, “Hey, come stand in a room and get 15-20 minutes to talk to people who will probably never give you work no matter how awesome you think your talk is”?

I’m going to keep my money from these guys.

Instead, I’m going to invest it in the work I know I get respected and paid for, and spend it on the family I do that work for.

And you can shove that up your stupid podium.