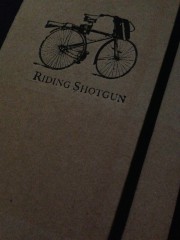 “You can’t catch a fish if you don’t put the bug in the water.” – Brad Farris, CEO of Anchor Advisors and founder of Enmast

On Saturday, I went out for an early morning bike ride so I could get in the miles on the lakefront without fighting foot traffic later in the day.

At the turnaround spot, I decided to go away from my usual Pandora station and listen to a podcast. I turned on Jason Konopinski’s Riffing on Writing. His latest episode was with my friend and former advisor, Brad Farris.

First, to the two them: I CAN HEAR YOU!

Now on to everyone else.

As Jason is wont to do, he led Brad down a path about content creation. While Brad doesn’t write for a living, nor does he enjoy it all that much, he does create quite a bit of content for Enmast, a community for small business owners, its blog, and a newsletter.

During the conversation, they ridiculed me because I can open WordPress, type a blog post, and publish it…all within an hour (which is precisely what I’m doing right now).

It turns out, that’s not so common.

But the conversation went from there to tools they both use (you’ll have to listen to learn what they are) and how to get content created when it doesn’t come so naturally.

Brad said something really interesting about content creation in Word. He said (and I’m paraphrasing) he uses Word to create strategy documents for clients, which tend to be very left-brained and logical.

So when he opens Word, he has a hard time turning off that side of his brain to be creative and write something people will want to read if they’re not paying him to write it.

It made me wonder if that’s not the case for a lot of people.

I love writing in WordPress because I can add links, optimize, categorize, add images, and tag the post all at once. I’ve always looked at writing it somewhere else and moving it into WordPress as an extra step.

But what if you hate the interface (which Jason and Brad both said they did) for writing?

But the most important tool for writing blog posts? Write every day. Even if you don’t publish every day, you can’t call yourself a writer if you don’t write every, single day.

Because, as Brad said at the end of the podcast, “You can’t catch a fish if you don’t put the bug in the water.”