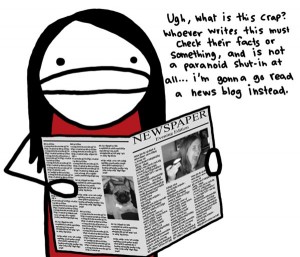 It gives us time to reflect on the week, plus we typically don’t have any interruptions that late so it’s a good time to focus.

This past week, which will run on Wednesday, Joe asked us if we’d read, “Acknowledging Antecedents, Again” by Darren Barefoot (an awesome name, by-the-way).

I had not read it so I took a few minutes to do so. And it let to a very lively discussion where we didn’t all agree.

Each of you likely will remember the hubbub this summer when Cathryn Sloan, a University of Iowa student, wrote , “Why Every Social Media Manager Should Be Under 25.”

Whoa, Nelly. Did people get offended. In all fairness, it was short-sighted and, well, lacking of perspective, but articles and blog posts galore were written about it.

Including an Inc. article by Hollis Thomases who wrote, “11 Reasons a 23-Year-Old Shouldn’t Run Your Social Media.”

In that article, she did not make mention of Sloan’s original blog post, nor did she link to any other articles or blog posts that defended or criticized it.

She just wrote her perspective and let the readers defend or criticize her.

In the same vein, Shelley White wrote an article for The Globe & Mail called, “Why a 22-Year-Old Shouldn’t Be Handling Your Social Media” (they since have changed the article’s title to, “Social Media too Important to Be Handled By an Intern”).

And, like Thomases, did not link to the original article nor do any of the other articles or blog posts that defended or criticized it. She did not, in fact, even link to the Inc. article.

Which is where the awesomely-named Darren Barefoot comes in.

He challenged The Globe & Mail for not linking to Thomases’s article and for using a much too similar “link bait” headline (which was changed when Barefoot emailed the business editor).

But here’s the real meat of the discussion.

In our remix culture, I feel strongly that we ought to, whenever possible, acknowledge our antecedents. It would have been easy for the Globe to recognize and link to Inc. in the text of the article (“In August, Inc. asked the question…”) or in a footer at the end of the article.

And, as Joe, Martin, and I were discussing it on Friday, they agreed. And, in my own practice I agree. I always give credit where it is due and link or quote when I’ve received inspiration from another source.

But I’m on the fence about it when it comes to journalism. You know, the kind where people get paid to write for publications that report stories without bias or opinion.

The Globe article was really well-written and was very well researched and reported, complete with quotes from both sides of the argument.

Sure, they have since admitted they read Thomases’s original article and that’s where they got their inspiration. But, in today’s digital age, are they required to link to it?