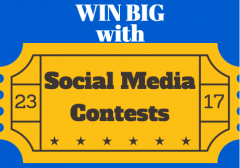 In a world of social media and connecting across cyberspace, social media contests are becoming a popular and effective way for companies to make a tangible connection with their customers.

When done well, social media contests can build brand awareness and engage users with your product or company.

If you’re looking for a creative way to promote your brand, follow the lead of these five companies that know how to do social media contests correctly.

When it comest to social media contests, giving away free round trip tickets was a no-brainer for airline Jet Blue.

They set out to increase their company profile by launching a Twitter scavenger hunt that promised free round trip tickets to anyone with the gumption to decipher their online clues and tromp around Manhattan to claim their prize.

Besides the appeal of a free round trip, this social media contest was also alluring by the ease of entering the contest.

To qualify, all people had to do was follow the hashtag #JB10NY, which would help lead them to the clues and objects that were required to nab the free tickets.

Victoria is letting her secret out and plastering it all over Pinterest.

The theme for the boards were “Dreaming of a PINK Summer” and “My Victoria’s Secret Summer.”

A combination of Victoria’s Secret judges and user votes would select the best pinboards, with one grand prize winner.

The runners-up won a $200 gift card, and the grand prize winner walked away with $1,000 to spend at Victoria’s Secret.

While gift cards aren’t always the most exciting prizes for social media contests, when your product gets hearts racing the way theirs does, it’s a worthy prize to offer.

Making sure you get the best Internet for the best price is what HighSpeedInternet.com is all about.

Their site compares and reviews providers across the country to help people find the best choice for them.

Because their site runs on reviews, it makes sense that they are offering a full free year of Internet service to folks who take the time to submit a review.

The site posted specific requirements for reviews, and one in 300 eligible reviewers is randomly drawn to win a year of free Internet service.

This tactic is compelling because it doesn’t just rely on social media, but is hosted right on the company’s website.

It also emphasizes customer engagement and opinion, which makes sense for a brand that is about promoting smart consumerism.

Heineken turned the tables on traditional Instagram social media contests by using a format that didn’t ask followers to post their own photos.

Instead, the brewer posted photo clues to a scavenger hunt and followers needed to decipher the clues, find the answer, and then comment on the appropriate photo with the hashtag #SHHH.

People who were clever enough to unlock the scavenger hunt’s secrets were eligible to win tickets to the U.S. Open Men’s Finals.

What made this giveaway smart wasn’t just the fun, innovative format, but the fact that the brand wasn’t overly-heavy in its presence.

Vowing to represent real women in their ads, Dove is a champion of positive body image.

It makes sense, then, that when they created the Real Beauty Should Be Shared contest on Facebook, the focus was on capturing the real beauty of real women.

To enter, followers submitted a photo of a friend and told Dove why this person represents “Real Beauty” and listed two things that makes them beautiful.

Rather than giving away prizes such as a trip, an iPad, or a year’s supply of Dove products,  the winners became the brand’s next spokes models—living up to the company’s commitment to represent real women.

This os a great example of how to tie-in a company’s mission with social media contests that honor its customers.

Instagram deserves a bit more mention due to it’s recent surge in the use of social media contests to increase traffic, gain followers, and create buzz about certain companies or products.

Some of the most innovative Instagram contests include a Dunkin’ Donuts Halloween contest, which asked followers to decorate their coffee cups for the holiday and upload pics with the hashtag #DresseDD.

The Four Seasons used an Instagram contest to ignite interest in the reopening of their Toronto hotel.

Whomever sent in the best picture that captured a perfect moment in the city using the hashtag #UncoverToronto could win a free weekend at the swanky hotel.

The contest worked so well the company expanded it to hotels in other cities, all with the same enthusiastic response.

Launching Your Own Social Media Contests

If you’re ready to take on your own social media contests, remember it’s not the monetary value of a contest that makes it effective.

Know who your target audience is and give them a reason to get excited about and engage with your brand.

Before you start adding social media contests into your strategy, keep in mind these simple guidelines:

Has your team created a successful, brand-relevant social media contests? What’s worked best for you?

Image Credit: Canva and Laura Petrolino’s poor attempts to be a designer

Sarah Pike is a community outreach coordinator for BusinessBee and a college writing instructor. When she's not teaching or writing, she's probably binge-watching RomComs on Netflix or planning her next vacation. She also enjoys following far too many celebrities than she should on Instagram.

View all posts by Sarah Pike