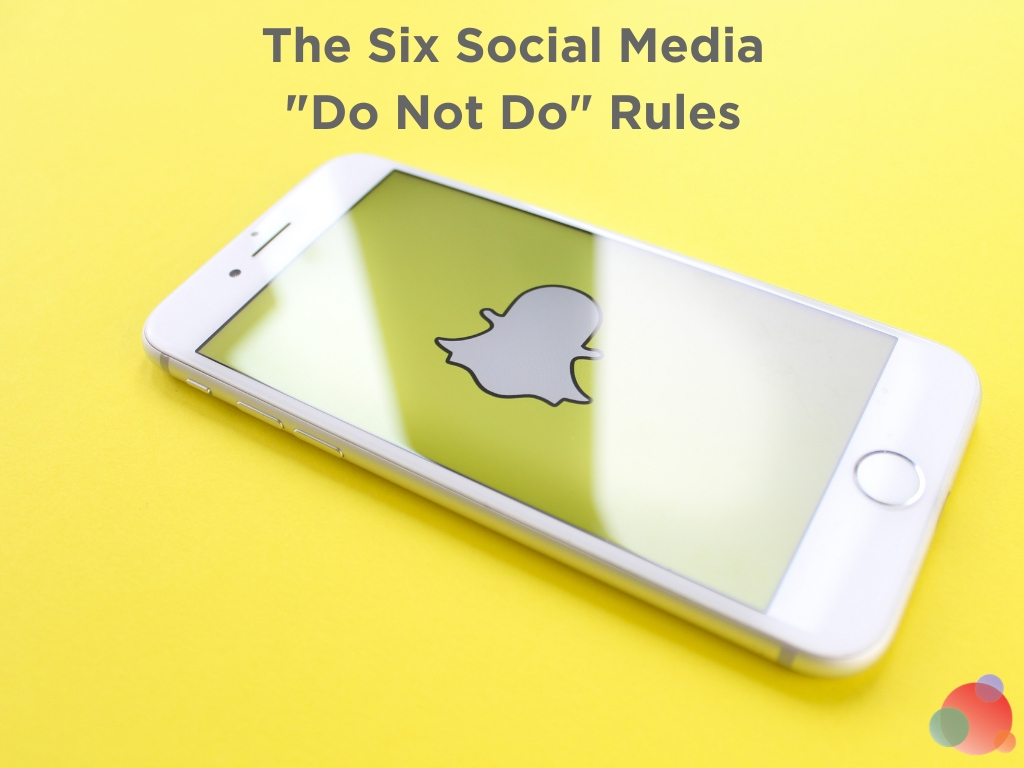 Twitter is platform that can give the little guy incredible power in the communications arena when used right.

And it can become a quagmire, because people say and do things behind their computer screens they would never say or do in person.

At its worst, Twitter is the mob: an army of sharks and trolls just waiting impatiently for the next feeding frenzy, and they are merciless.

Does the punishment fit the crime? Typically not. But we do learn quickly that our actions have consequences.

What you tweet matters, and we could all stand to become a little more accountable on social media, in general.

Most of us get a lot out of social media, and many of us also want to learn how to become better social media users, especially in the current, uh shall we say, tense political climate.

While today we’re going to talk about social media etiquette, and these guidelines will definitely help you become a more adept user, they are also a reminder to think about how we engage with others.

You would think it could go without saying, but you would be wrong.

We need to be mindful of the communities around us…and the human beings who occupy that space.

It always astounds me when people say things in writing that they would never, ever say to another human being in person.

My dad used to tell us not to put anything in writing that could be used against us later, but for some reason, people forget that cardinal rule when it comes to social media.

I have a friend who wants to create a ‘bot that tracks all of the horrible things people say—and then use that against them later.

His goal is to have it online so a potential employer or client can search the person’s name and see the horrible, nasty things he or she has said.

That’s going a bit far, from my perspective, but his point is valid: don’t say anything on social media that you could regret later.

To do that, let’s talk about some of the key don’ts, when it comes to social media.

My small child often reminds us that there are four things a plant needs to survive and thrive: air, water, sun, and love.

But not too much of each!

Just like you wouldn’t water water a new seedling with a firehose or tell someone you love them on the first date, you can’t overdo it on social media.

I get it. FOMO is real—and we’re all worried about missing out, even on likes, views, and retweets.

And sometimes, you just can’t help wanting to participate in a broader conversation.

However, the desire to stay relevant online is often confused with the need to post about everything, all the time.

The exception to this rule is if you’re participating in a Twitter chat. But it’s easy to warn your followers that you’re about to tweet a lot on the topic—and then go back to normal.

While there isn’t a hard and fast rule about posting frequency, you can determine the best share volume for your brand by monitoring:

As a general rule, most people expect Twitter to be a place for frequent posts (up to 14 per day), whereas Facebook is meant for one to two posts per day.

Now that I’ve thrown the book at you for posting too much, here’s the flip side: you can’t expect to post once or twice a year and then expect people to come rushing to your social profiles when you do finally have something you need to get out there.

The power of shared media is that it’s often a dialogue, and customers and clients often use your social media presence to gauge how well your business is doing.

That’s why it’s so important to keep an active—not annoying—presence on social media.

In some cases, going dark even for a handful of days or weeks can make people nervous and send them looking elsewhere for answers.

This can leave a lasting negative perception about your brand.

And don’t apologize for not posting!

Don’t call attention to your own lack of posting or inconsistency.

If resources and the availability of original content is an issue, rely on user-generated content until you can curate original, interesting pieces of your own.

Because rules one and two regard scheduling, look into a tool such as CoSchedule. It’s what we use and it’s incredible.

I mean, I love it so much, I asked it to marry me…and it said yes.

You can also check out Hootsuite or Buffer, which both have free plans.

This will help you stay somewhat consistent with your social media presence.

Most of us are not celebrities, except maybe in our own minds.

We can’t just post our own content and then run, knowing that millions of fans lie in wait to rev up the hype machine for us.

Every time you post and then refuse to follow-up on the likes, comments, and engagement of your audience, you’re losing crucial momentum that you can use to build your online brand.

If you want to receive comments, likes, and shares, and create a faithful audience in the long run, you can’t just slap a sales-pitch on your post without encouraging discussion around a broader topic or without inviting audience participation.

It’s a tried and true tactic when you’re building your brand online.

And it’s one of the most important things to do when you’re building community.

I know not every expert out there agrees with me, but we’ve built one of the most engaged communities on the web—if certainly not the most in marketing and communications.

You all rock—and it didn’t happen by accident.

We encourage respectful engagement. We learn little things about you so we can push buttons (in a good way) to enhance the experience. And we encourage discussion and debate.

It’s one thing to use slang and internet shorthand judiciously and wisely, it’s another to mix up your “theirs.” And do you know when to use “who” and “whom”? What about affect and effect? And the yours?

This isn’t a social media example, per se, but it goes to show how important proofreading is.

Imagine a bus wrapper with the photos and names of two attorneys and the headline in all caps, “CALL US!” But no phone number.

You may think this example is a bit over-the-top, but it actually happened! 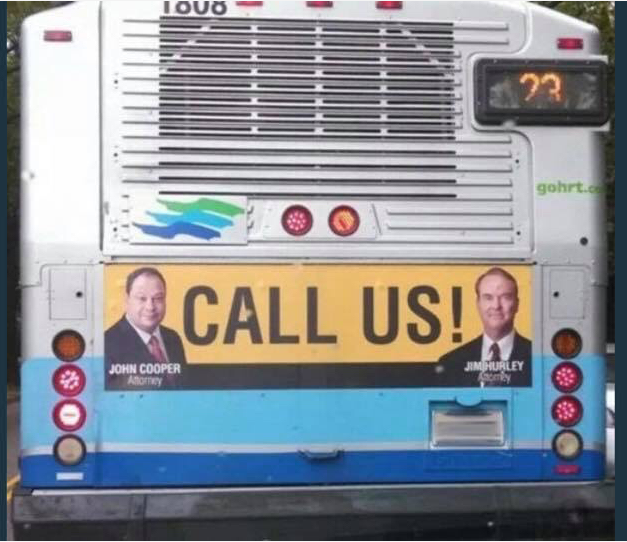 Good grammar should be a given, but it’s often neglected due to the immediacy demanded by social media.

That extra minute of proofreading is worth its weight in gold.

More than just punctuation: make sure you double-check sentence structure, subject-noun agreement, and the meaning of words.

Such as further and farther, affect and effect, and learn the difference between their and there.

Also make sure there is a phone number listed if your call-to-action is to have people call you.

This one is really important: do not—I repeat—do not write spammy, automated comments on other users’ posts.

Social media is built around conversations and relationships, not spam.

And don’t get a bot to do it for you, either.

The stilted, awkward (if not outright grammatically incorrect) English gives it away every time, and other social media users will react with suspicion, wondering if there really is a real living human behind the wheel.

While automation is great for curated content—and for scheduling your own stuff—it absolutely cannot replace the social part of social media.

To boot, if your brand is in the middle of a crisis and you’re copying and pasting your canned message, be prepared for the social media mob to come after you.

While it’s understandable that automation and the old tried and true copy and paste saves time, particularly in a crisis, it makes you a lot less approachable.

And being less approachable will be harmful to your brand for years to come.

And speaking of being harmful to your brand for years to come…let’s talk about politics.

Your social media behavior can hurt your business.

When Meg Whitman, the CEO of Hewlett Packard, shared on LinkedIn why she, as a Republican, voted for Hillary Clinton, it caused an uproar in the comments.

When Peter Thiel was backing Trump during the election, social media users took to Twitter to propose Paypal boycotts.

If you’re going to wade into politics on social media, be prepared for a backlash of gargantuan proportions, especially if you’re going in without a solid platform underneath you.

We used to say absolutely do not post about politics on social media…and then the 2016 election went unexpectedly.

When Nike used Colin Kaepernick in their latest campaign, they had to be prepared for the backlash.

And prepared they were. While the stock price initially took a hit, Nike product sales surged and the stock rebounded by multiples.

They know their audience is not those who will boycott them, but those who stand politically aligned with their brand.

(Plus it got them an incredible amount of earned media that would have been almost impossible to do through traditional methods.)

So, while you don’t want to post about politics willy-nilly, if it fits your brand’s direction—and you’re strategic about it, it can work out for you.

Just be prepared for the inevitable backlash—and for people who aren’t—and never will be—your customers to be very vocal about how much they hate you…for a few days.

The Six Social Media Do Not Do Rules

Those are the six rules around what not to do on social media.

Next week, we’ll be a bit more positive and talk about the things you should be doing.

Until then, the floor is yours.

What other mistakes do you find people make on social media that should be big no-nos?

Photo by Thought Catalog on Unsplash