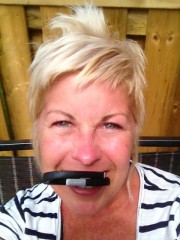 A couple of weeks ago, I shared a story about a rather unpleasant customer service/social media experience I had with the company Jawbone regarding their UP fitness bands.

I also shared with you a few of my *koff* quirks, the worst of which is how much I abhor getting water on my face. Any water. Even just a sprinkle.

A quick aside—my dad read the article, and texted me to say that he’s the exact same way!

Something I did not know, though he always did hate the beach when I was a child. He went on to say he also hates wind. That ‘buffeting’ feeling.

Guess what? Me too! Genetics FTW!!

Anyhow, back to my point.

My original post told a story of how not to handle an irate customer, and how not to behave if you’re a brand using social media (tip number one: Don’t ignore complaints!).

But I have an update!

I bring you joyful news—and a story of what to do if balls drop and a frustrated and disappointed customer takes to the blogosphere.

It helps, obviously, when said customer (me!) has coattails as wide as Gini Dietrich’s to hitch a ride on.

The original post garnered quite a lot of attention on social media. It also topped out at a rather respectable 69 comments.

It definitely touched a nerve.

But, and this makes me very happy, Jawbone fixed the problem. And they deserve a shout-out for their efforts.

There was certainly a little bit of social media pressure.

But, that’s the point of social media, right?

It also is a lesson in why companies have to pay attention to their strategies, as well as who’s running their social media ships for them.

Many people retweeted my piece and cc’ed @Jawbone.

One retweeter seemed to have a personal connection to Jim Godfrey, the head of communications at Jawbone, and made sure he saw the article.

As I made clear when I spoke to customer service the other day to resolve all this—when I wrote that post I wasn’t on a “take down Jawbone!” mission.

I was sad and disappointed in a company I like; one that has an amazing history of customer service wins, because they dropped the ball.

When Godfrey reached out to me, and assured me he would look into things, I responded in kind.

I was friendly, thanked him for reaching out to me, and even sent him this must-read David Sedaris fitness band obsession New Yorker article.

Within a few days, I had my first email from a brand new customer service rep, who had clearly been directed to make it right.

To make a long story short, not only are they replacing my defective UP band, they are also replacing my husband’s (he loaned me his to use—because I’m obsessed—after mine died), and are including his in the same delivery.

There are a few simple social media lessons here for all of us, consumers and brands.

That said, I still think Jawbone has a little ways to go with their social media and customer service.

Before I heard from Jim Godfrey, I got a rather perfunctory tweet from the company.

They first reminded me about their one year warranty, and then said they would get back to me about the issue at hand.

It wasn’t a warm and friendly tweet, and only served to reinforce the ‘we don’t care about you’ feelings I had been experiencing all week.

I also have yet to hear anything from them via Facebook.

This could be procedural: “We’re dealing with her, leave it alone.”

If that is the case, I don’t agree with their approach, but hey, I don’t work for Jawbone.

It was never made clear to me if this is a one off, because of my blog post, or if they’ll keep replacing bands as they break.

Speaking of which, hearing from Gini that they replaced her defective band—no questions asked, and with the exact same purchase date/warranty as mine—while I was in the middle of this kerfuffle was a lovely bit of salt in my wound.

Consistency is key when it comes to customer service.

Same rules and regs for ALL customers.

And all customer service reps must know this, and adhere to the same policies.

I really, sincerely love my UP band, and that’s why I did not want to go with another brand or product.

Our whole team uses them, and the corresponding app, and I would miss the camaraderie, commenting, and teasing that occurs daily.

And while I appreciate the efforts Jawbone made to make me a happy stepper, I hate to think of all those out there who don’t have the social influence of Spin Sucks, Gini Dietrich, and my many other friends and contacts that I used to get results.

While it doesn’t take a lot of work to keep a customer loyal, it takes even less work to lose one.

Keep that in mind when you see that next complaint fly by your social media sites.