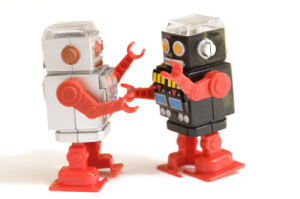 In Sherry Turkle’s amazing book, Alone Together, she tells the story of a man named Adam.

Adam has the goal of becoming either a songwriter or a screenwriter, but at the time Turkle meets him, he is just trying to make ends meet so that he can work on his passion projects.

There’s a problem, though.

Adam is not feeling productive or validated in anything he is doing in his real life.

As a release, he turns to two online games, and slowly, his online reality becomes far more pleasurable and rewarding than his real life.

In playing Civilization, for example, Adam is a ruler, a monarch. He can save “people.” He can earn loyalty from his subjects. Heck, he can save the world. Adam is finding himself playing these games for 15-hour-long stretches. When he stops playing he gets depressed almost immediately.

What really got my attention about this story was not these details, however. It was a much smaller portion of the story. Adam tells Turkle he once met a great woman named Erin. They had played online Scrabble together. Adam describes her as his best friend and confidante and then mentions he has lost track of her. “She moved on to a different game.” From best friend to nothing in 60 seconds. What does this say about Erin’s status as a best friend? What does it say about Adam that he refers to a passing online acquaintance in those terms?

The point of Turkle’s book is that while social media connects us, it also dehumanizes us. Just as Adam could play Civilization to fill various holes in his life, people can connect with other humans online that similarly fill gaps from the real world. Maybe you stay connected to me because I often tell you how smart you are, and that’s something you don’t hear very often in your offline life. When your self-esteem is low, therefore, you might seek me out, tell me what you’re up to, and get your fill of validation.

Here’s where it gets interesting, though. Once I have filled that need for you and I’ve gotten you feeling better, you can sign out of our conversation. I can be dismissed, much like taking a battery out of a robot. Now you can go be your confident self online or offline. As Turkle puts it, we become spare parts for each other.

Look back on the story of Erin “changing games” and therefore losing contact with Adam. Let’s say Facebook was suddenly shut down by evil aliens who took over the government. You are no longer able to sign in to communicate with your connections there. How many people would you have to talk to in that scenario?

Having left “that game,” would you lose touch with 90 percent of the people you talk to daily now? The answer, if you think about it, is probably yes. Yet we call each other friends, give updates on our families and our health, and strive, often, to extend our online friendships into something more.

According to Turkle, this does not differ from how humans relate to Artificial Intelligence. Any being that makes you feel loved can cause you to feel attachment and even affection, and she goes to great pains to prove this fact. But robots – whether they are your social media connections or your kid’s furby, are even better than real life because if you don’t feel like dealing with them, you can just turn them off.

You can go “off grid.” You can turn off your email. In unplugging yourself from your social media networks and the online world, I posit what you’re really doing is unplugging your robot friends till you want to deal with them again. Friends have become objects of convenience.

The repercussions of this realization can be complex and multi-layered, of course. We do not like to think that we use actual human beings in this way, nor do we like to think we are used this way. But consider what would happen if you made all of your social media outlets unavailable. How many people would still have the ability to contact you via phone or in person?

We are the Borg. Resistance is futile. Freaky, isn’t it?

Marjorie Clayman is Vice President of client services for her family's full service marketing firm, Clayman Marketing Communications. Margie is founder of Homespun Helpers, an organization on Facebook that has the goal of making and donating 3,000 items to charity in 2013, and is one of four co-founders of Blankies for Boston. Margie also guest blogs for Razoo, Intervistato, Sensei Marketing, Leaderswest, and Carol Roth.

View all posts by Marjorie Clayman