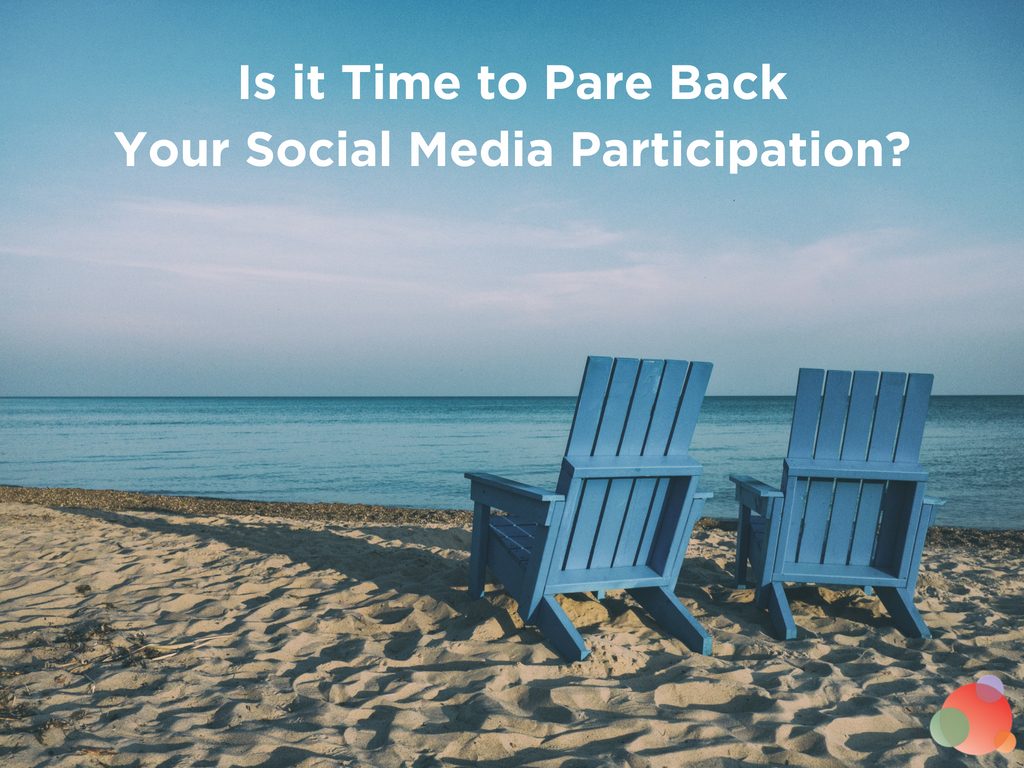 Is it time for you to “take a break from social media?”

This is the advice being doled out by one content creator.

And while this may not be entirely realistic for today’s marketer, there are some aspects of the concept which could actually help you produce more content.

The “take a break” comment came from Dave Cieslewicz, former mayor of my hometown, Madison, Wisconsin.

After his stint as mayor, Dave has become a regular blogger in Madison’s weekly newspaper, the Isthmus.

Dave urges his readers to declare dependence. “Take a break from social media,” he said. “You might like it.”

In the article, Dave (and I’m going to refer to him as such because it’s a bear to spell Cieslewicz correctly multiple times in one article) wrote about taking a hiatus in the summer of 2016.

The timing coincided with Donald Trump’s securing of the Republican nomination, which was a contributing factor in Dave’s disdain for social media at that point:

One of my reasons for taking a break from social media was that Trump had used it so effectively. Part of me thought that was unfair, a little like blaming the megaphone at a skinhead rally.

A great line, regardless of your affiliation. But Dave then went on to reveal some profound revelations from his experiment:

After a few weeks, I went back to consuming news and writing. But in almost two years, I have never gone back to Facebook or Twitter. And life is better.

He wrote about the fact that his regular check-in on these platforms a few times a day was adding up.

And he was beginning to burn serious reserves of energy simply in the give and take that is social media.

You would be surprised how much mental space gets freed up when you drop out.

Now keep in mind, this is a luxury few of us in the content marketing space can afford.

Part of what makes content effective is your ability to promote it.

Pundits such as Andy Crestodina and Gini Dietrich will tell you that without promotion, your blog post goes nowhere.

Or more accurately, gets read by no one.

So, you MUST be active on social media.

But here’s the deal. Maybe it’s not YOU who has to be active.

Let me deep dive into this a bit more.

Even with the huge proliferation of content on the web these days, the bulk of it is produced by a small number of people—known as the one percent rule (only one percent of users of the internet actively create new content).

And producing content is different than engaging on social media. It’s about mindset.

Think of it this way.  Consider your frame of mind when you’re engaging in the following activities:

It’s way too easy to get caught up in activities the first three because they’re easier. Number four is hard work.

But it’s that hard work that separates the winners from the losers, especially in Google’s eyes.

We need to engage in social media to have authentic conversations, but that negatively affects your ability as a content producer.

…modern life is bombarding us with a Niagara Falls of instant analyses, crude insults (as opposed to skillful ones), and a cascade of first impressions that never have time to grow into second thoughts.

You need time to grow your own “second thoughts.”

To do this, you could go cold turkey like Mayor Dave.

But if you don’t have the resources to pull it off, here are some other suggestions:

As we have learned the content marketing ropes, one thing we’ve done consistently is to produce content. It always comes first.

And it’s never failed us.

Your content can be king, but only if you assume the throne.

I may not be “taking a break” from social media usage as Mayor Dave suggests, but I’m definitely moderating my role in it.

I’m a producer, and I need to perform like one.

When I do, it gets eyeballs on my content and my company.

And you’re reading my stuff, so I guess the approach works, right?

Photo by Aaron Burden on Unsplash

View all posts by Greg Mischio