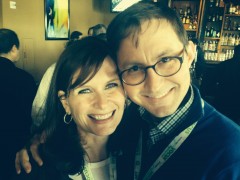 Today’s Spin Sucks Inquisition is with none other than Andy Crestodina, the co-founder of Orbit Media Studios, guest blogger extraordinaire, wicked smart professional, and slipper lover.

Andy is not only an in real life extraordinary friend, but one of the brightest minds I have the pleasure of knowing.

Along with Mana Ionescu, Sean McGinnis, and Jeannie Walters, Andy and I have a monthly nerd dinner where we talk about content, search, and business.

One time, Jeannie’s husband asked me why he and Mr. D didn’t get invited to these dinners. When I told him what we discuss over yummy food and wine, he said, “Oh! Never mind!”

Though I know him fairly well, I learned a couple of things about Andy reading his answers. I hope you do, too!

Ouch. I don’t like to think about it. But this one is probably my biggest screw up: In 2005 after four years of building Orbit, I began to think of other opportunities. I had been watching a trend in digital signage and had an idea for another business.

The idea was to build a platform that allowed anyone to create animated advertisements for digital signs. Just type in your business name, pick some pictures, add the contact information, and an ad would be created that you could then place on any of the dozens of networks of digital signs that I was sure were about to pop up everywhere.

It wasn’t a simple idea, but I was super excited about it.

I wrote a business plan, did my forecasts and designed a logo.

In a tremendous act of faith, my mother and stepfather put up the money to get me started. Everything was set for a giant mistake!

Orbit had the capabilities to build it, so that part seemed to make sense. But I got everything else wrong. I overestimated the growth of the digital signage industry and underestimated the amount of work it would take to build the platform.

To make a bad situation worse, I did everything out of order. I knew I needed a library of stock photos, so I immediately started negotiating with Getty Images. This triggered a bunch of legal fees for drafting and reviewing contracts…I learned I needed a specially configured server, so I bought one retail right away and had it put into a co-location center. Not cheap… I knew I needed eCommerce, so I signed up for a merchant account and payment gateway right away. So the monthly fees started up right away.

Meanwhile, I needed to keep Orbit going, so my attention was constantly divided. In just over a year, the money was gone. I had zero revenue and almost nothing to show for it except a year-old server and a CD full of stock photos. Total cost: $50,000.

What did I learn?

I speak Mandarin Chinese, or I did when I lived in China. My degree is in Mandarin with a certificate to teach foreign languages. I wasn’t a classroom teacher for long, but I loved it.

What I do now has nothing to do with China, but I still think of myself as a teacher. I learned a lot about people, about curriculum development, about speaking. I also learned a few things about communication barriers and how to go through, over, under, and around them.

I wouldn’t trade those memories for anything. Wo hai hen xiang hui qu Zhongguo!

Sure! As long as I can put “end global warming” on the list, I would absolutely make that trade. Giving up 10 years to make the world a sustainable place would be worth it. The saddest thing about being human is that our relationship to the environment can’t last. It’s just not possible on the path we’re on. (sadface.)

My target age is 81. I’m hoping to get everything wrapped up by then. I don’t really have any personal or professional goals that I won’t be able to finish. So unless it’s to save the coral reefs, I don’t think I’ll need to trade in 10 years. (happyface.)

Spam of any flavor. Not just email. I’m getting increasingly irritated by any uninvited commercial pitch. I get a lot of cold calls, catalogs in the mail and emails from SEO companies in India. It’s all the same to me. It’s all spam.

Who said this was ok? Do these tactics work for anybody? It’s just so inconsiderate. I don’t mind being pitched to, but you’ve got to warm me up first. Get creative. Do something different. Anytime I’m hit by a direct pitch, head on, I’m out. Forget it. I’m not even nice anymore.

Pick it up, read a few chapters and you’ll feel grounded and ready to handle anything, not because you feel invincible, but because you’re vulnerable. It’s a great message well told.

Because it’s toxic. Spin sucks because it erodes trust in the systems that we need to trust most. It makes people cynical, which bleeds into other parts of their lives. Nothing sucks worse than that.

You can find him on Twitter, Google+, LinkedIn, the Orbit blog, occasionally on this blog, and you can hear him at our May webinar (details forthcoming).