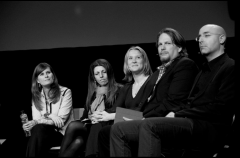 Chris Brogan is one of those guys you love to hate.

He was first to the social media world and quickly made a name for himself. He put himself out there – both personally and professionally – and it was easy for people to sit behind their computer screens and poke at him and his ideas.

But he is one of the good guys.

I met him in person in Norway – of all places – a few years ago. We were there (along with Maggie Fox, Valeria Maltoni, and Mitch Joel) to speak at a conference and I was both intimidated and in awe.

During the conference, people kept coming up to him, as if he were George Clooney or Matt Damon. And he was considerably gracious.

I watched him talk comics with one guy and books with another. He was reminded by several people that they had met before and not only did he remember having met them, he remembered small details about them that would seem insignificant to anyone else.

A true talent, it was incredible to watch.

Since that time, he has become a huge supporter of Spin Sucks and tells anyone who will listen that we are the go-to blog for PR pros.

That is why I asked him to sit on the Spin Sucks Inquisition hot seat today.

So far? My biggest mistake is shifting business models so fast, I go broke waiting for people to catch up to the new product.

I’m pretty weird and willing to say most anything, so there’s not a lot left.

I probably talk about poop more than any other business professional you know (not counting proctologists).

Imagine a 10 year longer trip in a suckier life?

How much space do I have?

I’m so annoyed by a lot of what the industry does.

Use systems so you can afford the time to do so.

I loved Mark Divine’s The Way of the SEAL very much.

Spin sucks because no one’s buying.

I’m not sure we ever did, but I know we don’t now.

Where to Find Chris

His new book, The Freaks Shall Inherit the Earth, is available now.