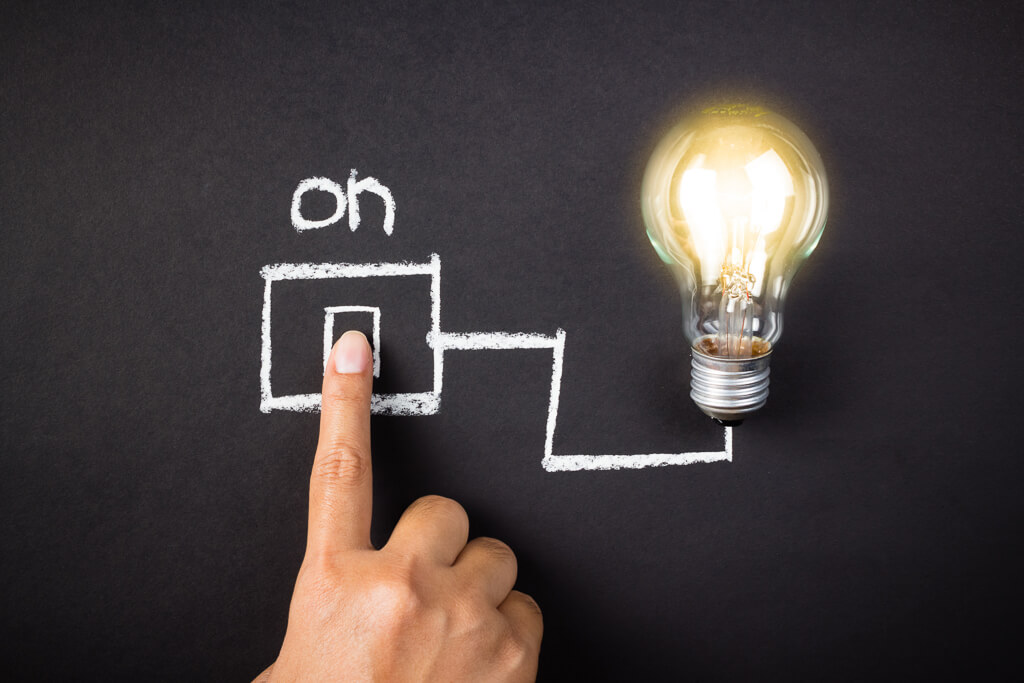 A little while ago, I got an email from Gini Dietrich asking about Postmatic, the blog engagement solution that I use on my own blog.

Given I had been a very early user of Livefyre (the comment system Spin Sucks has used here for the last five or so years), but had stopped using it, Gini was curious as to my thought process.

She’d read the posts that I’ve published about my decision to use Postmatic, as well as posts from the likes of Josh Wilner and Tim Bonner, but she had some more questions, specifically given my long-term use of Livefyre.

So, like a good friend, I answered Gini’s questions, and she signed up for Postmatic Premium (if you’re a regular Spin Sucks reader, you’ll know she doesn’t do things by halves!).

And then she promptly forgot about switching Postmatic on. Because, you know… Gini.

So, just as a little reminder to Gini, and an introduction for you to Postmatic and why you might want to make the switch too, here’s my clog-to-the-shin recap of why Spin Sucks should move to Postmatic in 2016.

(Editor’s Note: In fairness, I didn’t forget about it. I launched the Modern Blogging Masterclass and switching was going to take a lot more time than I expected so I put it to the bottom of the priority list.)

I don’t have access to Gini’s Google Analytics account, so I can’t look at her audience. However, given the topics as well as the comments, it’d be a fair bet to say the majority are made up of fellow communication pros.

Whether that’s PR, marketers, community managers, content marketers, I’m willing to bet the large majority of the current Spin Sucks audience are a mix of these core jobs.

And guess what’s still the number one form of communication for them?

Yep, that trusty old thing that was meant to die when social media came along.

Now, while Livefyre is a good comment plugin, it still forces people back over to the website to comment. If you’re working in an environment that has corporate firewalls, this can sometimes lead to issues.

Postmatic doesn’t have that issue because everything is done by email (although you can still comment via the web comment box directly—more on that later).

Depending how you use Postmatic, there are two key ways for readers to leave a comment:

(Editor’s Note: This one scares me a little bit, which means you’ll get an email from us twice a day—once at in the morning and once in the afternoon. That seems like overkill. There is an option to subscribe to a weekly digest, but that means there are 10 articles in one email. Still a lot. So we’ll test it and see…but you can also tell us which you prefer.)

It’s such a beautifully simple way of engagement, you wonder why it hasn’t been done before.

The additional beauty of this approach is the hoops traditionally needed to jump through to leave a comment are dissipated in one simple plugin.

For anyone worried about their inbox getting clogged up with more emails, that’s when another slick part of Postmatic kicks in.

If a blog post gets more than six comments in the same hour (or whatever number you set up in the admin area), Postmatic will pause notifications.

They’ll then send out an email advising the conversation is heating up, and it’s down to you—the subscriber—as to whether you rejoin the conversation and receive more emails, or leave it dormant. 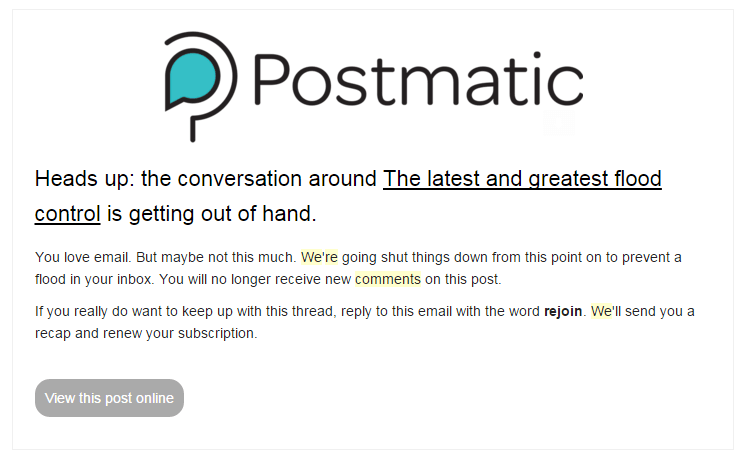 You can also unsubscribe from comments at any time.

It’s a nice way to put the power of comment notifications squarely in the reader’s hands, and makes the experience a more enjoyable one.

One of the things I’ve always enjoyed about Spin Sucks is the feeling of an active community. Every time a post is published, you can usually guarantee there’ll be a fun and lively conversation in the comments section.

At least, it appears that way—until you dig in a little.

If you go to the Spin Sucks home page, and scroll down to the bottom where the pagination section is (the part that says Older Posts and has numbers next to it), this shows you the archives of older posts.

Click through the first couple of pages, and you’ll see that the majority of the time, the active conversations (going by comment count numbers) is when Gini posts something herself.

Other authors (including the Spin Sucks team) don’t get the same interaction and responses as Gini does.

Is this because Gini’s posts are better? Is it because Spin Sucks is inherently tied to Gini, readers only comment when it’s Gini, because it’s a name they recognize? Is it because other authors don’t encourage interaction?

It could be all of these things or none of them. Or, it could be the fact that the active comments are more snapshots of an already-invested community, and new commenters are put off by the apparent closed circle.

Note: this is just a possible reason, and not a suggestion that Spin Sucks isn’t friendly to new commenters. Far from it.

My own take? Livefyre isn’t fostering the same thoughtful conversations it used to, because people are so busy elsewhere on the web. Given many comments are pulled from Twitter, this would seem to back that up.

Postmatic, on the other hand, goes the opposite direction, and truly fosters thoughtful, meaningful conversation.

Jump back to the opening of this post, and the statement about the preferred outlet for PR and communication pros—email.

Because our days are spent crafting thoughtful emails for either external or internal uses, we’re already in the email mindset when it comes to conversation. It makes us comfortable, and we open up more, take more time to express ourselves, and make better points.

Email on the other hand?

It doesn’t matter where we are. Train, office, bar, beach, or spa, we have our smartphone and we can email to our heart’s content. And we clearly do, if results from my own blog are anything to go by.

And it wasn’t just comment count—the comments were more in-depth, and more considered.

These were comments where people had clearly thought about the topic and what they wanted to say, versus just dropping a comment in to show appreciation for a post.

For communications pros, this is a potential goldmine of information and really in-depth crowdsourcing for either your own content, or that of your clients (including campaigns).

More than Just Comments by Email

Hopefully by now you’re starting to see why Spin Sucks would benefit more from using Postmatic (and you too, not just as a reader of this blog, but for your own, too).

But let’s say you really, really love commenting on the web version of a post, will Postmatic ruin that?

Postmatic is simply the conduit for comments. If used in conjunction with native WordPress comments, it doesn’t replace the comment box. It merely adds a little checkbox to get new replies by email.

However, if you’re a fan of the way Livefyre and, to some degree, Disqus looks and feels, then Postmatic has something for you in the way of their Epoch solution.

Pronounced epic, think of Epoch as the natural evolution of how all comment boxes should work. It takes the best of third-party features like social comment support (if activated), Ajax-powered refresh (for instant commenting with no page reload) and more, and adds the best of native WordPress (SEO-friendly, caching support, comment template styling).

In addition to Epoch, Postmatic also offers Optins, which are these cool email subscription boxes that you often see at the end of posts, or as fly-ins or pop-ups.

Not only do these help grow your subscriber base, but if you’re using Epoch on your blog, and someone leaves a comment, the pop-up opt-in will already have their name and email filled out. The reader just has to click the Subscribe button.

Pretty slick and frictionless way to grow your list!

If all this sounds like a cool solution so far, you ain’t seen nothing yet. To paraphrase The Joker, wait until you get a load of Postmatic 2.0.

Currently in Beta, Postmatic 2.0 has essentially closed the case on the best commenting and subscription mix for your blog (at least, if it’s a self-hosted WordPress one).

Now, instead of coming into a conversation late and missing the chance to share your thoughts, or missing a post because a particular day in the week was busy, Postmatic offers two very cool features that complement one another perfectly.

With Digests, you can set the date and time you wish a round-up of your most recent posts to go out, and let your subscriber choose their preferred option (daily, weekly, or monthly) in their subscription confirmation email.

So far, so every other newsletter feature, but here’s where it gets very cool.

First, Postmatic uses the design template of your blog to pull in your typography, brand colors, and H1/H2 tags, to offer a cohesive experience for your subscriber. Now, your newsletter is essentially an extension of your blog look and feel.

You can also add some introductory text, to personalize the message that goes out with your Digest.

I use it to explain the next cool feature of Postmatic 2.0, which you can read below.

When you receive a Digest, there are two options under each post excerpt: “Add to my inbox” and “view online.”

While view online is self-explanatory, the add to my inbox choice is simply awesome. 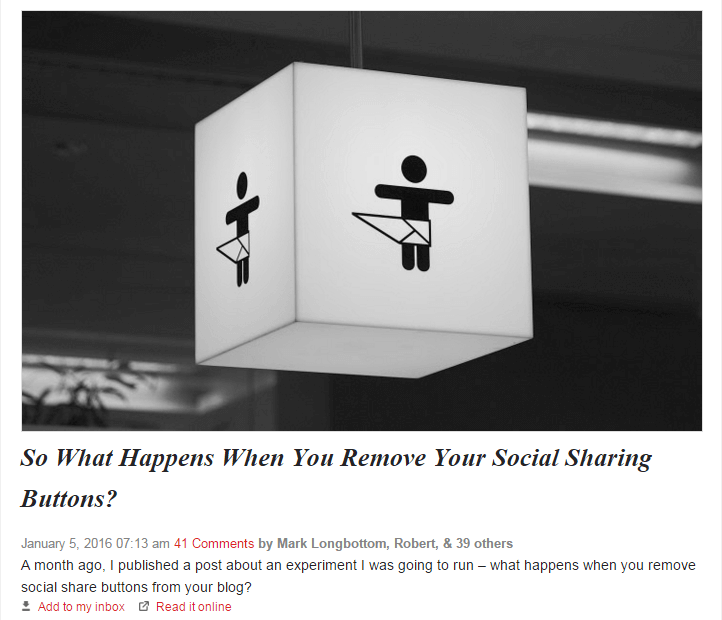 When you select this, a new pre-populated email box opens, with instructions to Postmatic to send your chosen post to you via email. Simply hit send, and within a minute (or less) that specific post will be delivered, in full, direct to your inbox. It’s essentially how single posts are delivered currently.

With a very big difference.

Now you can see all comments currently left on that post, along with the option to reply any of these comments by hitting the reply button underneath each one. 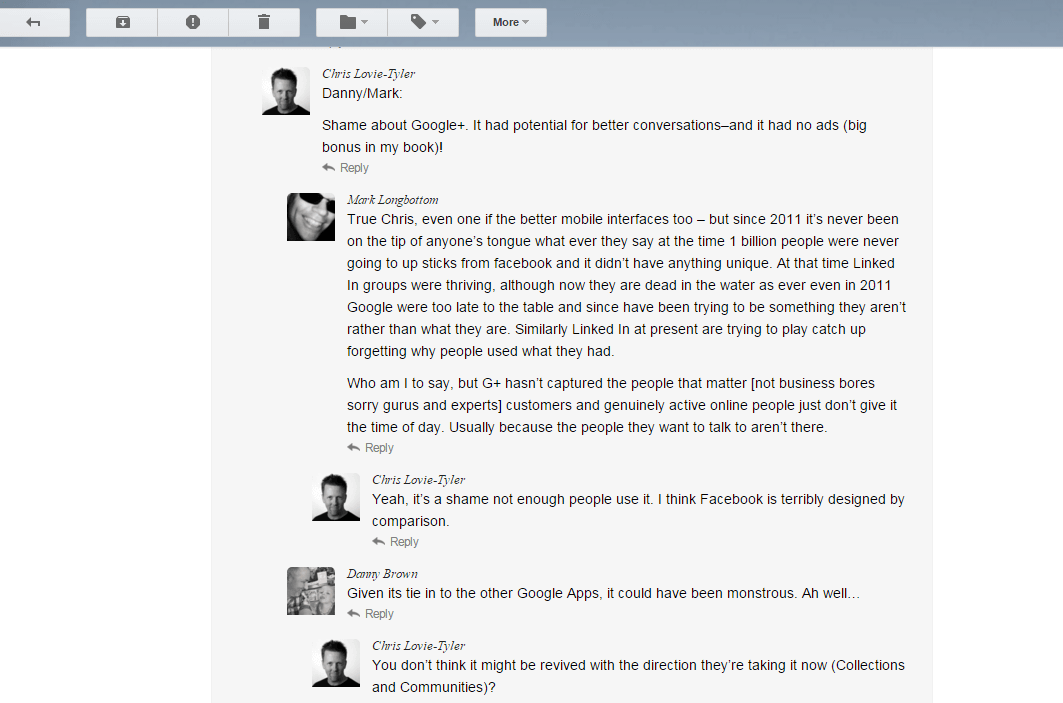 Now if you miss a post earlier in the week or month, you’re immediately not only catching up on the post, but the discussion that took part. And instead of having to scroll through a bunch of non-connected emails for previous comments, every comment is there for you to read and reply to.

I’ve just looked at the word count on this post, and I’m already nearly 2,300 words . So, maybe I should draw to a close…

I hope I’ve shared why it’s time for Spin Sucks to make the leap, and thank Livefyre for five years of great service, but times they are a-changing.

For communication pros who live inside email, it’s a no-brainer (and could also be tied to Spin Sucks Pro, but that’s another discussion altogether).

For anyone who loves thoughtful comments and a wider range of interactions, it’s a no-brainer.

For someone like Gini who thrives on her community of Crazies, as well as those who’re part of the “external community,” it’s a no-brainer.

I think you get the gist of my summary.

(Editor’s Note: Postmatic and Epoch are already installed here, so you can try the experience for yourself to compare to Livefyre. There also are some tweaks we’ll make this week as we hear from each of you and as we test it out ourselves. )

Let us know what you think about Postmatic!