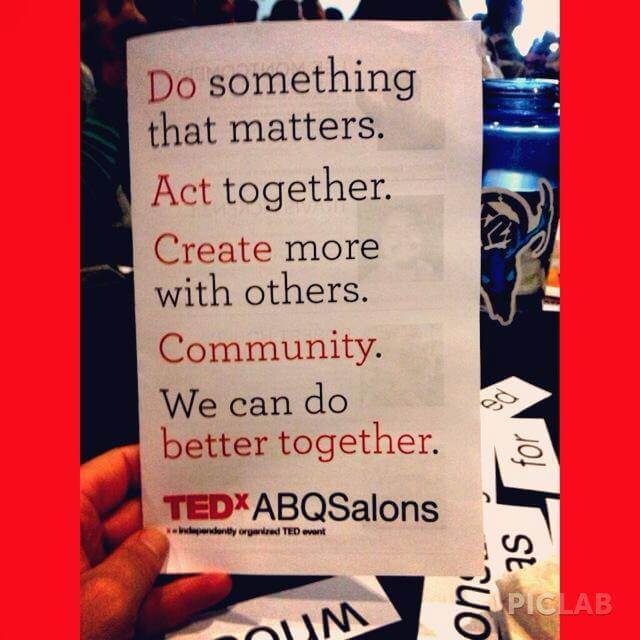 Telling a compelling story online is much like creating a good TED Talk.

You need to find the sparks of emotion and passion for a topic and nurture them.

Events such as TED and TEDx can also teach us some very valuable, practical lessons about transmedia storytelling (sharing a story or experience, typically collectively, across a variety of networks and devices).

I was fortunate to serve as the social media strategist for last September’s TEDxABQ – a day long event sharing ideas, telling stories, and inspiring people to look towards New Mexico’s future. It was the peak of a nine-month climb of planning, studying, adjusting, and planning again on how to share those stories with our online audience (both inside and outside of the University of New Mexico’s Popejoy Hall).

I’ve enjoyed being part of the Spin Sucks community so much throughout the years that this seemed like the perfect forum for sharing my TEDx experience and lessons learned.

I wrote this in part to give back, and in part to initiate further dialogue about the transmedia challenges and opportunities of digital storytelling.

Our goal for the TEDxABQ event day was to create a “Very-Very Important Person” event exclusively for our digital audience. This included some of the people who were in the TEDxABQ audience who were using their smartphone or tablet as a second screen to the event, as well as those around the world.

We wanted to create a unique digital experience.

We drew inspiration from the behind-the-scenes coverage of many of the big events we see on TV (i.e. Super Bowl, Oscars, World Cup) as the theme for our cross-media effort . More importantly, we looked at the growing number of fans who would interact with each other through social media (a.k.a the “second screen” effect of social interaction).

This is where it’s important to bring the mindset of a media professional to your social media work. You’re not creating news releases; you’re creating engaging, cross-platform stories that answer the question, “Why should I care?”

How do you do that?

The Tools of the Trade

Each social media platform has its own strengths and weaknesses in how people engage with its content. We tried to keep this in mind as we prepared for the TEDxABQ event day.

The vision of TED is “ideas worth sharing,” and we wanted to use the “second screen” concept to further our speakers’ ideas to our audience.

Twitter helped greatly with this. We used it to provide the moment-to-moment updates of what was happening on stage.

TEDxABQ fans were already discussing our speakers’ topics in real time. We would share many of their comments, which amplified their message with others in our audience who might otherwise have missed out on their ideas.

While Twitter was our “in the moment” network, we used Facebook more sparingly to introduce our speakers, share some images, and touch on the more important issues brought up during the event and engage with our audience.

As many people discuss these days, visuals are increasingly important to cross-platform storytelling. A picture does indeed tell a thousand words. For TEDxABQ, Instagram and Flickr were our weapons of choice.

Flickr served as our main digital asset storage. Almost all of the images created by our professional photography team were uploaded to Flickr a few days after the big event.

But this didn’t address our “in the moment” needs. In order to show our online audience what was going on, we needed a way to provide images to them in real time.

Instagram provided us that opportunity to give our fans a glimpse of what happened during our event as well as in the audience events during our breaks.

As for video, TEDx events provide a livestream for those fans who are unable to attend.

It’s accompanied by a live chat, which allows viewers to watch and take part in their own virtual event (again, creating that “Very-VIP” digital event).

In addition to the livestream, we set aside a video interview area in the backstage area. As soon as speakers finished their talks, we recorded an interview asking them how they felt after speaking, what they learned in their time preparing, and if they enjoyed their time with TEDxABQ.

Many of these videos didn’t make it online in real-time, as I had hoped, but we still have them as digital assets for later TEDxABQ projects.

So, what in the heck did we learn?

Social media is still a part of a good communications strategy.

Look at the business and communication goals and objectives and ask how you can create a strategy and tactics to promote a message supporting those goals across a variety of platforms.

What compelling stories does your organization have? How can you tell that story across a number of platforms?

For TEDxABQ, our story focused on the amazing ideas being shared by New Mexicans, and we were able to share that story in 140-character bursts, punctuated with images to keep our audience interested.

What cool stories are taking place out of earshot of the target audience?

Everyone has a story to share, as communicators it’s our job to find the intersection of passion, interest, and relevance that many great stories have.

Quality images are so important for an event such as TEDxABQ, where many audience members are participating in the online event on their smartphones and tablets.

One of the lessons we learned in 2013 was to not depend on iPhone photos, but invest time and practice on better cameras for the social media team.

One of the biggest reasons that TEDxABQ2013’s social media coverage was a success was that our team was excited to try new ideas to extend our story beyond what people were seeing on the stage. We also gave those who could not attend an opportunity to be part of our event, strengthening their ties to our community.

The Future of a City

One of the biggest reasons the social media coverage at  TEDxABQ was a success was that our team was excited to try new ideas to extend our story beyond what people were seeing on the stage.

We also gave those who could not attend an opportunity to be part of our event, strengthening their ties to our community.

Because of this work, many of them are still connected to us today, and have shared their own experiences and strengthened the idea that events like TEDxABQ have a part to play in creating Albuquerque’s future.

View all posts by Benson Hendrix