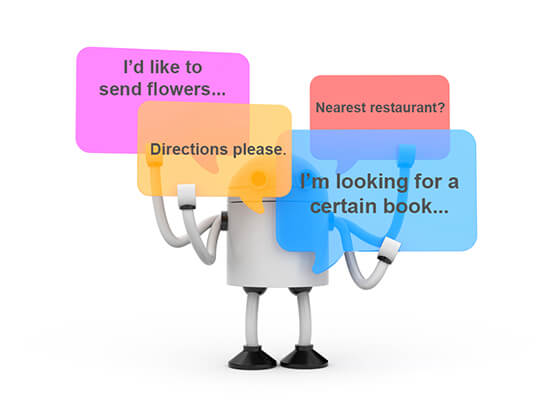 “Who likes calling a business?”

is a conversational UI, or an intelligent agent.

These chatbots are software, able to interact with people using natural, human language.

An example is Statbot, a conversational user interface on Google Analytics, that answers questions on key metrics through charts and tables.

It is artificial intelligence made practical.

Facebook recently announced that chatbots will be incorporated in its Messenger, doing away with multiple apps, or calling a business.

This highlights the growing influence of social media in modern society.

We have been using artificial intelligence for years, although it’s never been as obvious as now.

In understanding its growing power, here are 10 social media truths about chatbots that we should talk about.

Recent data revealed there are more than 2.3 billion active social media users around the world.

According to Pew Research, 90 percent of young adult Americans, aged 18 to 29, use social media.

It’s no surprise why companies such as Facebook and Microsoft are aggressively finding ways to encourage people to keep using their social media platforms.

So how will chatbots change the way businesses and consumers use social media?

Will this shake our perspective on artificial intelligence?

Chatbots are not new.

You may remember AOL and IRC channels that boomed in the early 2000s.

These, as well as SMS and MMS services, used simple bots to assist users.

The newer versions of these bots are better communicators that use natural human language and offer a larger range of services.

The ability for a more humanlike interaction is the very appeal that can lure back users who’ve logged off of social media.

Facebook says this decline in intimacy or “context collapse” is mainly due to users shifting to smaller audiences on other platforms such as Snapchat and Instagram.

Moreover, users are no longer comfortable with sharing personal updates that may not be relevant to all their contacts and friends.

Posting photos, videos and other personal materials dropped 21 percent as of mid-2015.

More people are ditching their newspapers for the news feed on Facebook.

This shift from status updates to news browsing is beneficial to the introduction of chatbots.

CNN is testing the waters by working with Facebook on its conversational user interface.

you shouldn’t have to install a new app for each business you deal with.

Zuckerberg ensures sending queries or ordering products will be simpler than ever with chatbots inside Messenger.

ChatFuel and Assist have already integrated numerous apps into their platforms.

As of January 2016, there were 3.4 billion global Internet users, a penetration rate of 46 percent.

There are 332 million more users than a year ago, and the rise is not slowing down.

Social media usage is also on the rise, expanding by 10 percent from last year.

will be the new websites, ushering in the beginning of a new Internet.

Soon you’ll be able to buy a new pair of shoes by simply typing keywords (e.g.-‘go shopping’) into your Messenger.

Facebook chatbots will guide you through the transaction. No need to scour the internet.

Social Media Marketing and Chatbots: Where To?

Social media truths from chatbots are not all rosy and encouraging.

The use of conversational user interface is expected to pose challenges to businesses and their marketing teams.

First, they must overcome the fact that people are not keen to talk to robots.

More than that, people do not like being deceived.

People should be aware they’re not speaking to humans, and they must be convinced it is okay.

There’s also the challenge of convincing businesses to use chat apps.

Brian Blau, an analyst at Gartner, warned about using AI in interacting with consumers.

Because we’re giving chatbots the power to act on our behalf, they’re taking on greater importance.

These truths are essential guides in developing data-improved tips for social media marketing.

The company was forced to delete Tay less than 24 hours after it transformed into a racist, Hitler-loving sex promoter.

You see, Tay was designed to learn from conversations with human Twitter users.

What were they (Microsoft) expecting when they introduced an ‘innocent, young, teen girl’ AI to the jokers and weirdos on Twitter?

It was the epitome of a PR nightmare.

In the future, chatbot developers need to assure businesses their AI’s will never pull a Tay.

Putting Out the Fire

No system is faultless.

For instance, Tay was developed by Microsoft, whose credentials in tech innovations is unquestionable.

Their accidental racist, curse spewing chatbot is a testament to the saying “nobody’s perfect.”

As businesses explore conversational user interface for various aspects of their operations, a faux pas is likely once in a while.

This means social media management has become more relevant than ever.

When Google launched its Allo messaging app earlier this month, it faced a wave of privacy criticisms, specifically the capability of its chatbots to read messages.

End-to-end encryption and cloud-powered AI chatbots are incompatible. The default mode in chat apps will either favor privacy or AI chatbots.

However, an auto-delete feature without end-to-end encryption is yet to be introduced.

Users need both to have privacy in a way that matters to them.

Convincing users and businesses to trust robots is not the greatest challenge for a social media agency.

There won’t be issues on unions, wage gaps, gender disparity, and all other matters relating to labor laws.

The use of chatbots offers a truly compelling argument.

However, governments and worker groups will definitely fight back.

At the end of the day, job creation is a key economic indicator, and human welfare is paramount.

Chatbots are an exciting upgrade to our social media experience.

Imagine an interactive assistant who understands your needs in the language you speak.

We may be a long way off from a Hollywood-like AI, but the prospects are encouraging.

Kimberly Grimms is a futurist who spends most of her time monitoring social behavior in search of new consumer trends. She uses this information to create viral and useful content as part of the new media strategy. She's interested in technology, market behavior, new media, environment, sustainability, and futuristic scenarios and businesses.

View all posts by Kimberly Grimms