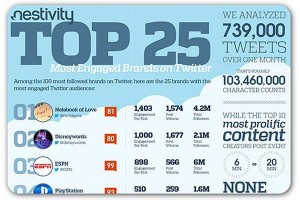 A couple of weeks ago, Brian Tudor tweeted DJ Waldow and me and said, “What makes an engaged brand on Twitter?”

We had a back-and-forth discussion about what it entails: Conversation, shares, retweets, and shares of others’s content.

Brian said, “Okay, then. Why does Nestivity say the 25 most engaged brands on Twitter do none of those things?”

We looked at what he was describing and found the top three most engaged brands to be Notebook of Love, Disneywords, and ESPN.

First, let’s look at the numbers:

Then, for sake of understanding the engagement of each brand, we took a look at their Twitter streams. 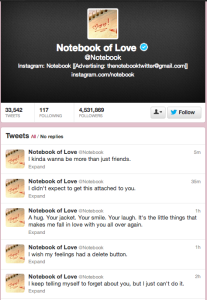 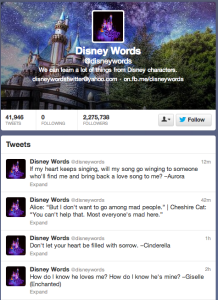 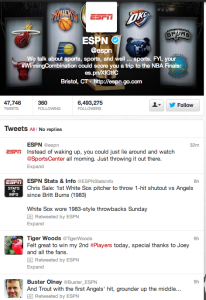 Both Notebook of Love and Disney only share their content. ESPN does a little bit better by retweeting others, but there still is not a single level of engagement, in terms of conversation.

What Nestivity says is engagement, however, is number of shares and retweets per post, meaning people are sharing their content, not the other way around.

When you look at it that way, you find:

That’s great! But engagement it does not make.

Best of the Least Engaged Brands

Rather than take our word for it, though, we decided to ask research extraordinaire – Tom Webster – his thoughts.

My issue with the study is it’s less about the variable (and proprietary) definition of “engagement” here, though that does make the study a bit impenetrable. The central issue, as is the case with the vast majority of these sorts of studies, is with the sample set, and how the results are reported.

In this case, the researchers chose the 100 most-followed brands on Twitter. These brands have millions of followers, which by definition makes responding to those followers a scaling nightmare. The very act of simply  following back five or 10 million followers would be a full-time job. If you think about it in that light, that these brands engage at all is pretty remarkable, and expecting a brand with 10 million followers to engage the same percentage of those followers as a brand with 5,000 followers is a misleading and unfair yardstick.

To that end, I have no doubt, even considering the likely inscrutability of their “engagement” measure, the 25 brands they chose do, in fact, engage more than the other 75 brands in that sample set. But confining the sample to the 100 most-followed brands leaves out way too many brands (certainly in the tens of thousands) to make any kind of blanket statement that these 100 brands are representative of anything. There is very likely an inverse relationship between the number of followers a brand has, and the percentage of those followers a brand does (or can) engage with.

And there you have it, folks. This study shows these are the best of the least engaged brands on Twitter.

The moral of the story is this…be careful what you read. Pay attention to the details. Ask a lot of questions. And use your critical thinking skills.