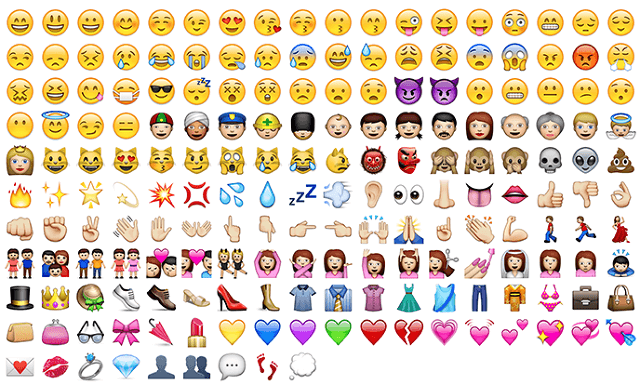 Be afraid. Be very afraid.

Emojis aren’t just popular; they are fast becoming the low standard that marketers aim to reach their audiences on a regular basis. With more reliance on our mobile phones, scanning instead of reading, and millennial-courting as the number one priority, I fear that the emoji marketing machine is taking over.

What, oh what becomes of the written word?

But Emojis Are Fun!

Before you get all emoji-agro and cry, “But emojis are fun!” I wholeheartedly agree—to a point.

They’re great to add as a cute, sassy, or whimsical sign off to a text and instant shorthand. But emojis have gone from a Japanese pictograph, to technology punctuation blip, to the way to order a pizza, queue up emotions for news articles, and even a basis for a movie.

And emojis are infiltrating our lives as a marketing imposter: Whether it’s custom emojis, billboard signs, or an entire marketing campaign (including bewildering news releases), brands are brainlessly piggybacking on a cultural craze without caring how it affects the future of all marketing.

The Emoji is Terrifying

Here’s the thing: Emojis are a prop—they’re not a marketing plan or strategy. Nor are emojis a substitute for sentences or phrases.

Picture, if you will, a bunch of marketing execs sitting in boardrooms plotting to win millennials over with their new smiling dog poop, custom brand flags, and wacky beer insignia strung together on their latest ad.

The second you whiff of trying to be cool, you’ve lost the battle.

Ultimately, slapping emojis together is a one-trick pony. Decoding and interactivity is a fun way to engage an audience in your message, but it’s a novelty and a side show, not substantial or sustainable.

Worse yet, it doesn’t help set your brand away from the pack. It’s not “using your words,” as adults say to children acting out.

Perhaps graphic artist Michael Beirut said it best: “I find emojis: Terrifying—a soulless reductive endpoint. If Shakespeare is at one end, an emoji is at the other.”

Can You Read and Write?

Here’s another way to look at emojis: The ancient hieroglyphics of Egypt were developed because most people could not read or write unless they came from privileged background.

Words are important, especially when you’re trying to communicate with people who can read. Blending them together in smart and clever ways is the art and science of copywriting. Swapping them out altogether with emojis encourages the dumbing-down of communication altogether.

My imagination wanders (not in a good way) as I envision emoji-only marketing agencies as a cottage industry, creating marketing campaigns based on demographics and the subtleties of face emojis.

Of course, there will be that agency that tries to convince Wells Fargo execs they need to invest $1M in an elaborate custom stagecoach emoji as the fastest path to a millennial love fest.

The Place for Emojis

Emojis do have a place in branding and advertising, but it’s a small one.

Sprinkle one in here and there when it is a seamless, perfect fit with the campaign.

Dumbing your message down for your audience is as bad for them as it is for your brand.

Lifeless, cardboard emojis strung together don’t have the power to elicit real emotions, but words do.

Let’s keep them around for a while.

Janice Cuban is a communications consultant based in San Francisco. She is all about content marketing for B2B, B2C, and small businesses. When she’s not a Content Queen, she is freelancing writing, blogging, and loving all things marketing, technology, and trends.

View all posts by Janice Cuban