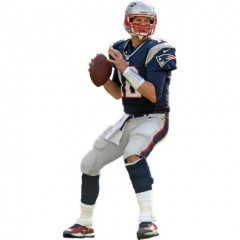 Introducing Fathead, a company that makes all sorts of life-sized decals of almost anything you can think of, including NFL stars.

Not too long ago, they had a remarkable experience on Reddit that began, oddly enough, with a PR crisis.

About six months ago, Redditor frigidcoke ordered a Tom Brady fathead for his new office. As a New England Patriots fan, this was a perfect addition.

Unfortunately, frigidcoke did not receive a Tom Brady fathead; instead, he was shipped a different player’s fathead — and not just any other player.

Being a Pats fan, and the fact this was a hilarious mishap, frigidcoke would not let the unruliness stand.

He swiftly snapped a photo of the mess up and posted it to the NFL subreddit.

Mike Cole, an avid football fan and sales strategist for Reddit, noticed the post and, realizing this was a potential PR crisis, contacted the Fathead marketing department with a golden opportunity.

While the original post was still brimming with exposure, the Fathead marketing team produced a relevantly hilarious, slightly self-deprecating, and perfectly timed sponsored headline in the NFL subreddit.

Sponsored headlines automatically get placed above first position posts, so this was the best-case scenario as far as responses go.

This was their headline:

This headline racked up 136 up-votes, 78 comments, and even got active Redditor and NFL punter Chris Kluwe to comment as to the reason why they didn’t make a fathead of his likeness.

Also, a Fathead spokesperson light-heartedly responded to allegations of the whole thing being a setup:

At this point, it’s fair to says the PR crisis has been averted, controlled, and with a special gift to frigidcoke, transformed into a positive branding and sales experience.

Frigidcoke created another post in the NFL subreddit that was up-voted even a bit more than his original:

You may be the thinking this is the perfect end to a great PR story, but in fact, the story does not end here.

Just five days after the whole shindig went down, Tim Tebow was signed to the Patriots, causing uproar in the Patriots subreddit community.

Mike Cole reached out to the Fathead team again with a new golden opportunity.

This was the result:

This sponsored headline linked back to the follow-up post by frigidcoke, instead of linking to the Fathead website.

This was an odd move because they are paying for the exposure of this headline. Fortunately, the community appreciated, raved, and poked fun at the whole series of events.

Since Reddit remains a mysterious place to many public relations professionals, this story shows that, yes, there is indeed hope for us. As we have witnessed, members of the Reddit staff helped Fathead navigate through what might have been public evisceration.

The end result was an averted PR crisis that was controlled and transformed to benefit both the community, and the organization involved.

It’s important to mention the strategic application of a targeted sponsored headline. For those who are unfamiliar with Reddit terminology, this is essentially a paid advertising spot for “first position” placement in a subreddit (a niche community) of our choosing. 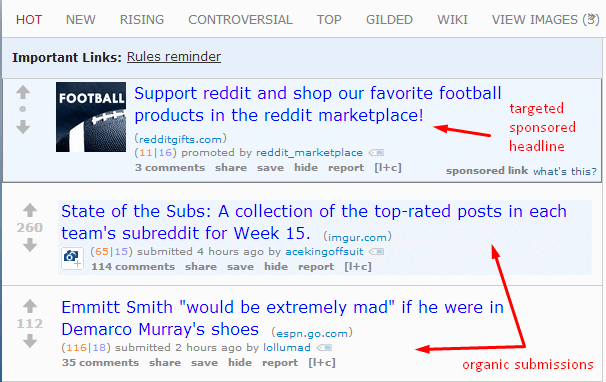 In this example, we’re in the NFL subreddit so a football-themed headline is appropriate. We do not want to fill this space with a headline or link that violates the Reddit self-promotion rules or even social media law, but we do want to attract attention.

The best way to do this, as we’ve witnessed, is social monitoring, research, and open-minded marketing.

Key takeaway for PR professionals: start exercising our creative side so we can move and act swiftly in the face of a future crisis.

A little self-deprecation can go a long way when we mess up, so don’t be afraid to publicly accept that mistakes were made, and roll with the punches.

Jesse Aaron is a professional blogger with a passion for homebrewing. He writes on a variety of topics on Mashbout.

View all posts by Jesse Aaron