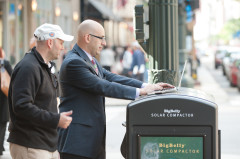 Hey everyone… let’s do a video! It sounds like so much fun, and I have it say… it is.

More and more companies are producing PR and marketing videos, and thanks to the web and social media, they have become easily shared pieces of content.

Video allows company leaders to share their stories with customers and prospects. The About Us video is the most common one businesses produce, and it typically lives on a company website. It tells people who you are, and what you’re about.

But that’s the standard. That’s the video every business should already have. You want more. You want the company to stand out from the competition!

Here are four videos most companies aren’t producing, but should be.

If you work for a company that’s hosting a big event, this is a double-content opportunity. That’s right… one event providing two videos!

The first opportunity is a preview video. How do you promote that event? Send an email? Post it using social media? Can you think of anything that’s going to grab more attention than linking to a video?

It’s one thing to tell people Andy Crestodina is going to be speaking at an event. It’s far more compelling to hear from Andy himself.

The same thing is true after the event is complete. You could simply send a tweet saying what a great event it was, or you could share a video. What’s more engaging and tells a better story… a video produced during that amazing event or 140 characters?

Companies excited about producing a video sometimes get a little too excited. Before long the “short” video they planned to produce is now running five minutes or longer.

There’s a way to turn that to your advantage. Break it up into a video series. Instead of one five minute video, produce five one minute videos.

Think about some of the things a business might want to cram into a single video. An explanation about what it does? Some of the products or services it offers? Maybe provide a facility tour? What sets it apart from the competition? How it helps clients?

That sounds like five videos to me. And guess what? Now you have multiple pieces of content, instead of just one.

I LOVE this type of video. A company’s best sales people aren’t only the sales staff.  They can be people answering the phones, developing products, training assembly line workers, heck, even pushing a broom.

Every business has team members with personalities… the type of people everyone loves. I don’t care what they’re their job is, get them in front of a camera immediately.

We all know we buy from people, so why aren’t companies featuring them? Let us hear from the company’s brightest personalities. Let them show us what they do everyday. Help them tell their stories, and the story of your business.

These people shine, so let them illuminate the company.

Most organizations have testimonials from customers on their websites. They are typically a couple of sentences and occasionally include a photo.

Take the testimonial idea and have your customers talk about how much they love working with you on video. In fact, use the opportunity to let them talk about their business and how they use your product or service in helping to achieve their objectives.

By providing the testimonials in visual form, prospects are more inclined to pay attention to what your customers have to say about the experience of working with you.

No matter which type of video you decide to do, and I recommend doing them all (I am a video producer after all!), the key ingredient is telling a good story. Just “doing” a video isn’t good enough. You have to tell a story that’s relevant to your audience.

Editor’s Note: Tomorrow we have another guest post about video! Stay tuned.