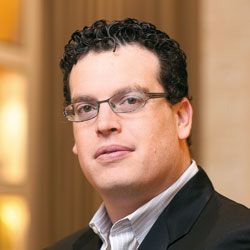 I’m not usually one for predictions, it’s just not in my DNA to whip out my crystal ball and try to gaze to the future.

However, when you spend enough time in any space, you start to see trends and recurring themes that offer insight into what’s coming next.

During the past few years, social media has been an individual sport: A way to put out your shingle and start making a name for yourself.

While groups, businesses and associations can all leverage the tools, there is often the feeling that social media has been meant to level the playing field rather than support traditional hierarchy.

Sure, not every user is created equal, but overall, the explosion of the personal brand created a far flatter system.

So what is changing?

The more time we spend online, the more we discover who we want to hear from, and who we want to win. Even though we started out on our own hoping to grow a personal brand or a business, we inevitably and almost unconsciously pick our team.

We’ve already seen examples of this, both formal and accidental. The Read & Trust network is a fantastic example of writers banding together to both help raise awareness for their individual work while building a business model.

One look to those who are often referred to as the A-listers of social media and you will see they are often as invested in each other’s success as they are their own. This kind of focused selflessness (which admittedly helps one’s self-interest) seems to be a key to rising above the fray.

While I may look foolish later for saying so, I can’t help but think that this is a sign of what’s to come. That it is time for us to start taking serious steps toward building tighter networks. We are seeing early signs and models that embrace this idea such as features such as Google circles and businesses such as Triberr, but in order to really take these efforts to the next level, you’re going to have to do something that can’t be automated.

Michael Schechter is the digital marketing director for Honora Pearls, a company specializing in freshwater pearl jewelry. He writes about all things digital on his blog.