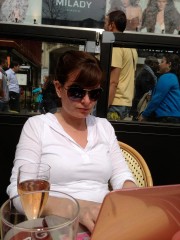 When we started blogging seven years ago, it was a complete disaster.

It was just a blank screen, some incomplete thoughts, and a publish button (at least for us it was).

Fast forward four years when we actually put some goals in place for Spin Sucks and it was things such as, “Increase visitors by 36 percent” and “Add one guest blogger every day.” What we were missing, though, was the ROI of blogging, in terms of actually getting clients from all of the work we were doing.

Tom Elgar, the CEO of passle, recently wrote a blog post called “The Unremarked Death of Another Business Blog.” In it, he describes how difficult it is to not only start and maintain a blog, but to grow it and to keep it alive, AND how to show an ROI of blogging.

What is the ROI of Blogging?

This is where we were stuck in the fall of 2010. We had exceeded the goals – which I’ll today refer to as vanity goals – we set at the beginning of the summer, but we still weren’t making any money from the blog.

We batted around some ideas. Should we sell content? Should we create a subscription-based professional development site? Should we host paid webinars?

The answer to all of those questions was yes and we embarked on trying to generate revenue from each of them.

We created eBooks and sold them for $9.99. We built monthly webinars and charged $50 to attend. We even developed a professional development site called Spin Sucks Pro that cost $50 per month to join.

Well, not entirely flopped, but we didn’t make enough money to cover the costs to create these things and we certainly will never recoup the costs in building Spin Sucks Pro.

A little more than a year ago, we sat down and looked at the assets we had created and considered the freemium model that exists on the web. We decided charging for content wasn’t the way to go and we began to offer all of that for free.

But now we were back where we were in 2010 and still had no idea how to make money from all of these efforts. We still didn’t have an ROI of blogging.

In January of this year, we decided to stop trying to make money on content and begin to drive new clients from the reputation we had built.

Today, 40 percent of our new business has come directly from Spin Sucks. Which means prospects are finding the blog – either through search engine optimization or word-of-mouth – and like what they read.

It’s fairly easy for us to track that right now because it’s a simple, “How did you learn about us?” when they first approach us. For consumer businesses or organizations with more than 100 or so customers, that gets a little more difficult, but setting up a mechanism to learn how people know about you is the easiest – and most efficient – way to track your blog’s effectiveness (assuming lots say, “I read your blog!”).

It’s true you can’t measure brand awareness and reputation, but if you use your blog to achieve those two goals, the revenue will follow.

P.S. The image is of me blogging on the Champs-Élysées in Paris this past April.

A version of this blog post first appeared on the FeedBlitz blog, who also happens to be a client of ours.