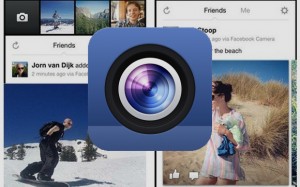 But why build a photo-sharing app when you just dropped a ton of cash on one last month?

It turns out the Instagram deal isn’t quite finished. The FTC is probing the purchase because of competitive reasons. They’re looking into what Instagram could have accomplished on its own and whether or not the deal will hurt competitors, giving Facebook the monopoly in mobile photo-sharing.

But the Real Reason

But neither of those are the real reason Facebook went ahead and launched its own mobile photo-sharing app.

Instagram has more than 50 million users, which is great for Facebook. But they have nearly a billion users. And getting those not using Instagram to use the app is likely not a worthwhile venture.

It also means the current Instagram users won’t switch to Facebook Camera (let’s be real; it’s just not as cool).

It’s Not for You or Me

It’s for the Facebook user who is moving away from his or her desktop connection to the phone, to share life’s little moments every day.

I wish I could remember who said it, but somewhere on Facebook this past weekend, a friend’s status said, “Isn’t it funny how we used to avoid our friend’s slideshows after a vacation and now we hungrily search out those photos?”

Things are changing. Mobile is where it’s at. And, rather than try to force 950 million people to use Instagram, why not give them something already incorporated into the social network they’re accustomed to using?