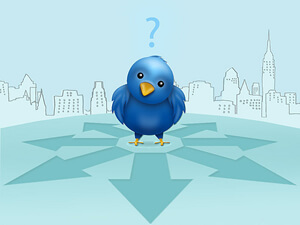 Spending as much time as I do speaking, writing, and counseling clients on the shift in how we communicate, Twitter invariably comes up at least once a day (if not more). People don’t understand why they’d want to read about what someone had for lunch. Or, sometimes, someone will tell me they HAVE to get on Twitter because it’s all everyone talks about and they need to have a new way to sell their wares because the old ways are no longer working.

So rather than listen to me talk about how Twitter is not a sales tool or say that, yes, some people talk about what they had for lunch, I thought I’d pull some of my favorite case studies to show how you can use Twitter for your business. By now it’s pretty easy to understand the consumer implications so, instead, I’m going to show you how businesses that work with other businesses use Twitter to generate leads (and revenue).

Caution – this is  really long post, so scan through the case study that is closely aligned with what your business does.

A lot of bloggers and reporters have interviewed Pitney Bowes because they are perceived as an old, stody postal meter company. But they’ve done a great job of embracing the social tools to help change their brand’s image, as well as create a dynamic user experience for their customers.

In an interview with Aneta Hall, the company’s emerging media manager, Shel Israel explores how Pitney Bowes use Twitter to engage their customers.

“First, it’s listening and understanding what’s on the minds of the community Pitney Bowes engages with. Second, being helpful to our customers as well as others who want to know more about us. Third, advancing community-based initiatives such as “Holiday Mail for Heroes” (in collaboration with the American Red Cross).

“Twitter is for individuals rather than brands. If you are willing to engage in conversation on a person-to-person basis, it does not matter if you are B2B or B2C – Twitter is the tool for you. Ultimately customer service and listening to customers is about people and not B2B or B2C.“

2. Vistage International is a CEO membership organization whose audience are business owners and leaders

Because Vistage is a client and because I also am a member, I advocated they use the platform to prospect for new members and Chairs, namely the up-and-coming entrepreneurs who are Gen X and (in some cases) Gen Y. But, because their audience was the Baby Boomer, there was some discussion about whether or not their audience is on Twitter. So we tested a few tiny campaigns and began to show some results.

During a two month period, we had some pretty good success:

* There are a few hundred Vistage members, Chairs, and speakers on Twitter and this was an easy way to build relationships with them very efficiently. We  empowered them to talk about their Vistage experiences (good and bad) as part of what they already discuss on Twitter.

* Every time the Twitter community talked about their Vistage experience, five to 10 people asked us about the organization, which led to warm leads.

* A lot of the traditional communication tools we use (news releases, Webinars, and white papers) began to feature some of the really smart members we met on Twitter. So, instead of always using the same experts, we were able to widen our reach through adding new experts and new topics.

* In a two month period, the Twitter campaign secured 36 member inquiries and six new members, which was attributed to our network of members, Chairs, and speakers.

3. I’m a big fan of OPEN Forum because of the excellent business content it delivers on a daily basis.

The reason OPEN Forum uses Twitter is to provide information, strike up conversation with small business owners, and to drive people to their conversational site (which is separate and apart from its corporate Web site).  Their goals are to: Build brand equity, acquire new customers, and build loyalty among existing customers.

4. Intel, as most of us know, provide the processors inside the machines we use for work.

According to Intel employee, Michael Brito, the company doesn’t have an official “Twitter strategy” but it is a tool that many employees use to build relationships, listen, learn from others/each other, and get the latest in news.  Their tweets are not typically Intel related because:

* Pe0ple relate to people, not logos or brands

* Twitter is a place for conversations, not one-way marketing messages

* Twitter builds community, connects people, and fosters relationships; and in order to do so requires authenticity. It’s difficult to be authentic when hiding behind a company logo

5. Last, but not least, and certainly very self-serving, a case study on how we’ve used Twitter to grow Arment Dietrich, a B2B company and service business.

Last January (2009), I was going to the International Franchise Association show and wanted to see how this Twitter thing worked, in terms of creating an opportunity to meet people there, who also are on Twitter. I don’t think, at that point, I even knew the term TweetUp. I just wanted to have an informal happy hour to meet as many people as I could. And it worked! I met @rieva @kategroom @aaswartz and others in less than two hours.

But just meeting them was not the final goal. It ended up that Rieva asked me to write for AllBusiness.com and I was on BlogTalkRadio with she and Angie multiple times. So, an efficient way to use Twitter was to invite people to a happy hour. Then it resulted in various ways for me to build the firm’s reputation through contributed columns and guest appearances on the radio program.

From there, I realized there is certainly a way to use Twitter to network, to prospect for new business, and to convert leads into real revenue. Since then, (many of you know from following me on Twitter), I’ve become a huge advocate of the tool as part of our business growth strategy.

Lots of people say to me, “Well, Twitter makes sense for your business because you’re a communication company.” I don’t agree with that. We are a business. We have to market and sell, just like any other business. We use Twitter to network 24/7, which leads to new business prospects. It doesn’t matter what our company does…we’re finding people who would hire us, just by using Twitter to network. That strategy applies to any company.

A few lessons you can take away from these case studies:

* Twitter provides information, strikes up conversation with potential customers, and to drives people to your Web site or blog

* Twitter is a way to network 24/7, to develop new relationships and to encourage brand loyalty among current customers

* Twitter is a place for conversations, not one-way marketing messages

If you want even more B2B resources, my friend Scott Hepburn wrote a brilliant post that has a zillion links in it called B2B Social Media: A Resource Guide.