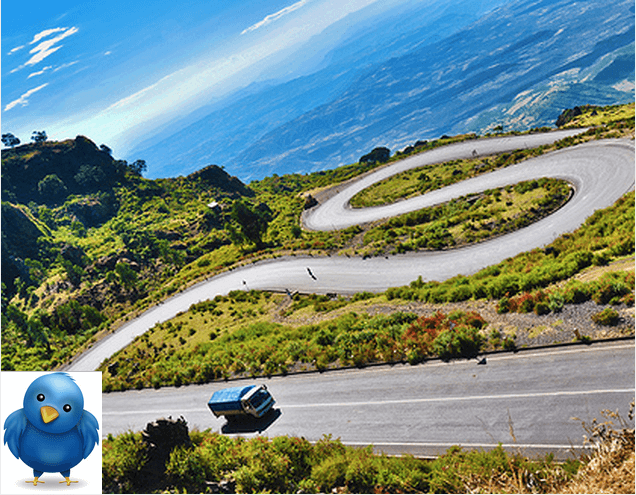 For those of us on social media, trend watchers, and especially employees and stockholders of Twitter, there is a question mark surrounding the future of the social network.

Dick Costolo is out as CEO with a frantic search underway for a new leader.

The platform has changed some of its rules within days of the shake-up. Speculation abounds that it will be purchased, rebranded, or trashed altogether (anyone remember Friendfeed?).

Despite all of its popularity and buzz, Twitter is not making money and is losing its user base.

In the middle of this chaos, however, it’s business as usual on the platform: Brands are tweeting like mad, users are jumping on trending hashtags, and celebrity Twitter flubs are a dime a dozen.

I spoke with Twitter expert Rich Brooks about what he sees in his crystal ball, and which smart practices are likely here to stay.

He should know, he’s been on Twitter from the beginning.

Firm parameters on real estate, once the holy grail of the social media network, are only getting bigger.

Twitter is chipping away at and circumventing its own 140-character limit to increase the space users have.

Examples creeping in recently (even before the shake-up): The ability to add native photos, videos, and retweet with comments.

Within days of Costollo leaving the company, the 140-characters shackles were also off direct messages.

Another big shift announced just last week is geared to grow and engage its base: Project Lightning, which allows users to follow events and news, not just people or brands.

This might be a test concept (note the word “project”), but it could radically change the focus of Twitter and potentially eliminate the newsfeed concept altogether.

So…what are constants for Twitter users (at least for now anyway)?

On Twitter, your warts or beauty marks are revealed for the world to see—how many followers you have, the number of lists you’re on, and other stats.

A brand with only 500 followers tells us a lot, and can be perceived in a poor light.

On the other hand, if a company has 50,000 followers, but are not engaged (or worse, spam bots), that adds up to a lump of cyber coal.

It’s quality versus quantity. Follower counts are based on your goals for Twitter—if you have a vertical niche, geographic area, or sub-culture, focus on that audience, not just your overall numbers.

Show Your Personality (But Have a Filter)

One of the great things about social media is that you can present your brand the way you want.

Brooks recommends that companies show their personality, but act as if “you’re on a second or third date.” In other words, “Show your best self. Be an honest, transparent person but you don’t have to tell everything.”

Even a serious business, such as taxes, can be occasionally light-hearted, accessible, and still establish authority.

Yes, accounting can be fun and you can still show your passion for taxes. Whatever you do, people are looking for quick answers, so keep that in mind.

Promote Yourself (Within Limits)

On Twitter that means 80 percent of your tweets should be focus on the needs and interests of your followers, and 20 percent should promote your brand’s content.

Likewise, if you want to connect with influencers and celebrities on Twitter,

The only way people will see you is if you’re talking to them directly. Retweets, mentions, and DMs (if the account allows it) increases the chances of getting the attention of someone you want to notice you and elicit a response or retweet.

Brooks also reminded me of some great features that don’t get a lot of play on Twitter:

Brooks’ final thought on what makes Twitter his favorite social platform (in less than 140 characters, of course): “The magic of Twitter is other people,” he said.

Janice Cuban is a communications consultant based in San Francisco. She is all about content marketing for B2B, B2C, and small businesses. When she’s not a Content Queen, she is freelancing writing, blogging, and loving all things marketing, technology, and trends.

View all posts by Janice Cuban