When I began speaking four years ago, business owners told me the whole Internet thing and, particularly social media, was a fad.

Soon they began to comment they understood it might be here to stay, but it was just something for their spouses to use to keep up with kids and grandkids.

Just this year, they began to ask me how they can implement social into their larger marketing mix and how to measure its results.

When we talk about these things, I use examples to show how social has fundamentally changed the way we communicate. I ask how they heard about Bin Laden’s death or whatever the latest news is that day or week.

It’s really cool news can be reported instantaneously, sometimes right on the ground as it’s going on.

Think about how we learned about the plane that went down in the Hudson River. Janis Krums was on the ferry that went to pick up some of the passengers and tweeted a photo of it. 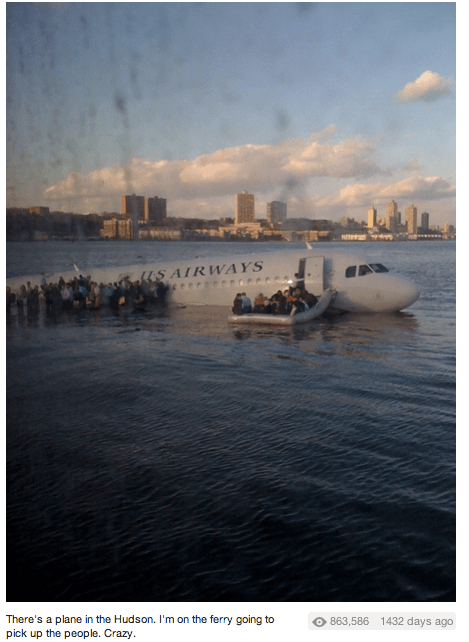 But there is a dark side to “citizen journalism.” Ethics in media is corroding quickly as journalists jump to be first to the story without first checking facts (was it Michael Arrington who said he’d rather be first than right?) and they’re telling stories that aren’t correct.

Matt Bors is a Facebook friend of Ryan Lanza, who is the brother of Newtown, Conn., gunman Adam Lanza.

The story began when CNN named Ryan Lanza as the suspect in the shootings, based on a police source. Because of the credibility and reputation of CNN, other journalists were not only reporting the name, but passing along a link to Ryan’s Facebook account.

As Matt tells it, “People I knew were suddenly telling me, Dude, you are Facebook friends with the suspect.”

Because Ryan’s Facebook security settings were set to private, the media couldn’t see him posting on his wall, “IT WASN’T ME I WAS AT WORK IT WASN’T ME.” Meanwhile Buzzfeed and Gawker raced to name him the shooter and said he was dead at the scene.

According to an article Matt wrote for Salon, he posted a screen grab of what Ryan was posting on Facebook and then (in his words) that’s when things got crazy.

Of course, the screen grabs were passed around Facebook and Twitter so quickly, no one knew if they were real. They hit my stream and I looked at them without realizing what they were or fully understanding who Ryan Lanza was at that point.

I remember thinking, “Who is this person?” and clicking through it without giving it another thought.

Then it got worse…for Matt.

The screen grabs spread fast and I found myself inundated with messages, some from journalists seeking confirmation, many from people saying angry and bizarre things to me or about Ryan. One demanded to know how I could be friends with such a monster. Could I help a random Internet sleuth create a “psychological profile?” Did I see warning signs in Ryan? Why did I suspiciously post cartoons about mass shootings only days before? That was very tasteless. A text to my phone from an unknown number read, “Looks like this killer is a fan of yours.” A Twitter user declared me a “snitch” for sharing Ryan’s post. Someone accused me of having something to do with the killings, “which you take delight in,” they wrote, and hoped the FBI would hold me accountable.

What the heck is wrong with people?

Responsibility For Use of Social Media

We’re operating in a world where messages come at us so fast we don’t have time to think. It’s so easy to share something we agree with or think is funny. Surely, we think, it wouldn’t be on the Internet if it weren’t true.

Jennifer Dunn wrote a great guest post for Danny Brown talking about our responsibility to fact check the things we see on social media before reposting them.

And she’s right. We must stop and think.

Ryan Lanza lost his mom and has to live with the fact that his brother killed 20 children and six adults. Imagine how awful it must be to be accused by national media for something you didn’t do on top of all of that.

And then consider being Matt Bors…getting death threats because he tried to set the story straight.

This world is crazy. It’s fast. It’s overwhelming. It’s the responsibility of every one of us to stop, slow down, and check the facts before we share them.