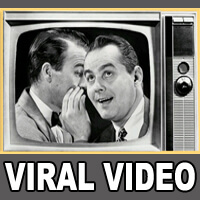 Have you heard that Ylvis song “What Does the Fox Say?”

I’m sure you have, or maybe you live in a van down by the river.

Here’s a question for you after you’ve finished watching the video: Did you see the Honda Civic planted in the middle of the song?

How’s that for smooth advertising?

Viral videos have exploded onto the cultural scene. Even if you haven’t heard of Ylvis, you’ve no doubt seen the Old Spice “I’m On A Horse” ad, or watched “Charlie Bit My Finger.”

As you might have guessed, YouTube is the primary source of all things viral. Social media and smartphones have made the consumer-driven distribution of videos easy.

At least for consumers.

This makes the jobs of advertisers easy: Produce a viral video ad, upload it to YouTube, drive sales.

Setting off the chain reaction that makes a video attain “viral” status can be tricky. There’s no guarantee. With more than 100 hours of video uploaded onto YouTube every minute, users may miss the video entirely.

If advertisers can’t figure out how to bring their videos to light, their campaigns run the risk of falling behind those of their clients’ competitors.

A key component to a video that might just go viral is a combination of unique entertainment value and emotional jolt, driving viewers to make it through the ad before sharing it with friends.

According to HBS Assistant Professor of Business Administration Thales Teixeira, this is called “advertising symbiosis.”

A lack of empathy from advertisers and their agencies can doom these attempts at eliciting positive emotional response from consumers before they even start.

During the 2011 Super Bowl, Groupon launched an ad that, in eyes of viewers, trivialized human rights abuses – and reactions were strong.

The Verizon FiOS “football girl” ad campaign saw some success with nearly one million views. Impressive, but still small compared to Isaiah Mustafa and the Old Spice 47 million. Like the Old Spice ad, it’s pleasantly absurd, but not offensive.

Given enough time, the ad might just climb into the viewing and sharing stratosphere.

As easily as a video gone viral can drive positive attention to brands, it can just as easily tarnish. Wendy’s “irresistible frosty machine” photo tops the list of 8 Grossest Fast-Food Moments.

Also included is a video of a Dominos employee creatively tampering with customers’ food to disastrous PR (and health!) results.

We are no longer the passive consumers of the past, listening to jingles and watching infomercials on TV. The role we play in the social distribution of advertising is crucial to their effectiveness.

An effective advertisement is entertaining and it’s really as simple as that.

Whether it makes us die laughing or seethe with anger, it has to make us hit that share button.

Kelley McGrath is a recent graduate from Wake Forest University with a BA in Communication and an MA in Business Management. She is currently working as a digital marketing professional and freelance writer, specializing in social media and sports tech. You can follow her on Twitter at @KelleyAnneMac.

View all posts by Kelley McGrath