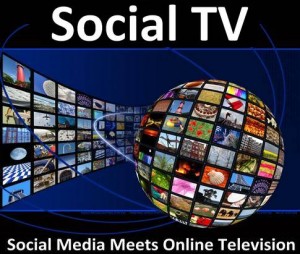 Last week, I was invited to speak on a panel at the Association for Education in Journalism and Mass Communicators conference.

All in, there were about 1,000 journalism professors in Chicago for the annual conference, here to learn about new technologies, how business will affect their student’s future careers, and ethics in new media.

I was furiously taking notes!

And then it was time to learn about Social TV from Mike Hess at Nielsen.

He began by describing the amount of time people still (STILL!) spend watching TV. Not on their phones. Not on tablets. Not streamed. Actual TV.

He said the average American watches 153.25 hours every month of television. That caught my attention! That’s more than five hours a day (and doesn’t include the time they’re watching on other devices). I rarely watch TV, but if I do, it’s half an hour max (it puts me to sleep). So the idea that people spend an average of five hours a day blows my mind.

Next time someone tells me they don’t have time to exercise, I’m going to ask them how much TV they watch. But that’s a different topic for a different day.

The most interesting parts of Mike’s presentation, though, was when he discussed how Nielsen is paying particular attention to the multi-taskers – the people who watch TV while participating on the social networks.

The top three places people visit while they’re watching TV are: Facebook, YouTube, and Yahoo! Mail. In comparison, the top three shows they watch while also playing online are: A Hallmark movie, NCIS, and Judge Judy. Apparently you don’t have to fully focus if you watch those three shows!

As well, 88 percent of tablet and 86 percent of smartphone owners use their device while watching TV.

What Does this Mean for Marketers?

According to the Nielsen research, social media is growing furiously as a driver of television programming…and it’s being influenced by what our friends and family are Facebooking and tweeting about.

But, with hashtags and program sites offering more content outside of the shows, multi-taskers are starting to go to both the social networks and the show’s sites instead of sending email or getting distracted by other things online.

Think about that if you’re a television advertiser.

You can create content that drives people to YouTube, the show’s sites, and your own company sites in order to get more information, engage with other show viewers, and connect with the characters.

It’s a pretty interesting time, to be sure!