I’ve spent the past four days in Google+, trying to figure out if it’s a Facebook killer, a Twitter killer, or just one more social network we have to use.

I can say with certainty it’s none of the above, but I haven’t yet figured out what the heck it is. Problem is, it’ll be hard to do so until a good number of my friends are in there and using it. As John Falchetto said, “We’re just the crash test dummies” right now.

I don’t think it’s a tool everyone will use. It’s doubtful it’ll have the same 50+ year old user like Facebook has, mostly because it’s linked to a Gmail account and Chrome, one more thing the Baby Boomers have to get.

Robert Scoble invited 1,000 of his friends during the weekend so he’d have enough mass to figure it out. Jay Baer thinks there are business applications (I don’t agree…yet). Chris Brogan has 10 reasons he thinks it will be a Facebook and Twitter killer. Jason Falls thinks it is a Facebook competitor and some of his readers hope he’s right just to see something different and/or better.

Joe Thornley did a test post the other day with Shel Holtz. Shel asked a question, Joe answered it, and tagged me. 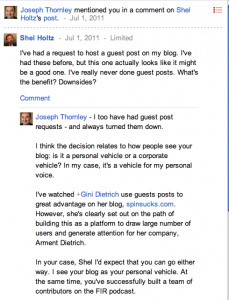 Deb Dobson and I elated in the fact that Alberto Contador didn’t win the first stage of the Tour de France. 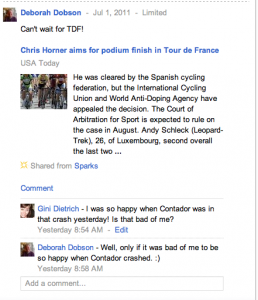 Todd Lyden posted a link to an interview I did (the ensuing comments were about my big head and fun stuff like that, which you don’t really need to see). He thinks it’s a Twitter killer. 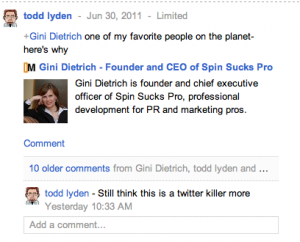 Daniel Agee noted that not only do the email notifications go to spam (so check your spam folder), but that we’re sending unsolicited emails to the people we invite. I guess that’s why they’re going to spam, huh? 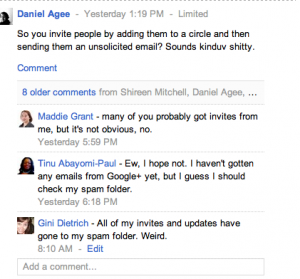 And then there are lots of invites I can accept, hide, or block, which gives me some privacy that Twitter does not. 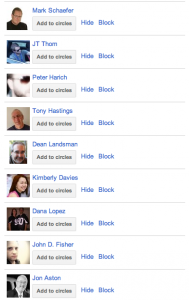 It has only been four days so I’ll be back in 30 days to give you an educated opinion.

Until then, put this in your pipe and smoke it. With the exception of Deb and me, all of the posts, comments, and blog posts about the tool are from men. Is it that men are better early adopters than women? Or is it that women just don’t see the need for one more social network?