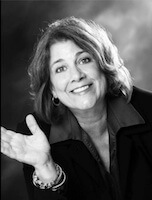 Our digital world is constantly evolving in response to user demand.

New tools and systems are being created and introduced almost daily.

And, almost as quickly as something is put into use, someone figures out how to get around it.

An estimated 282 million Americans are using the web in 2012.

Seventy percent of the adults who use social networks shop online.

And most of them are talking about what they are buying, thinking of buying or have already bought.

Some of them post reviews online. A positive online review can be worth its weight in gold. Leading businesses and marketers to try to figure how to encourage customers to post positive reviews.

Some businesses have offered compensation for good reviews. Some just ask their customers to comment online about their experiences.

This is Where it Gets Interesting

Online user reviews sites are plagued by false reviews. Gartner has predicted that by 2014, 10-15 percent of online reviews will be fake – bought and paid for by businesses hoping to influence prospective customers.

“Marketing, customer service, and IT social media managers looking to use reviews, fans and ‘likes’ to improve their brand’s reputation on social media must beware of the potential negative consequences on corporate reputation and profitability,” says Ed Thompson, vice president and distinguished analyst at Gartner.

Clearly We Have a Problem 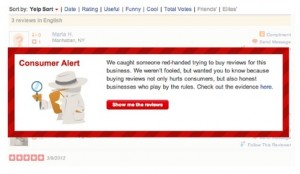 Yelp has just announced its Consumer Alerts initiative, an effort to stem the rising tide of fake online reviews. Yelp uses an automated review filter to identify false reviews and has already called out nine businesses for “shady practices;” i.e. paying for reviews. Yelp has posted its new Consumer Alert warning, edged in bright red, over each of these business profiles.

The text on the alert reads: “We caught someone red-handed trying to buy reviews for this business. We weren’t fooled, but wanted you to know because buying reviews not only hurts consumers, but honest businesses who play by the rules. Check out the evidence here.”

Yelp states that its “…automated review filter is working around the clock to flag these types of biased reviews…” Yelp is to be commended for stepping up to govern the quality of the content posted on its site. But what if a company’s reviews get flagged in the automated review filter but are genuine? What if the business has just asked their customer base to comment?

For a business, the risk of being misidentified as complicit in paying for fake reviews is very real, making engineered “positive word-of-mouth campaigns” potentially dangerous or problematic. Marketing, customer service, and social media managers need to be wary of offering any form of compensation for positive reviews, and be ready to manage negative consequences should they be identified as having tried to game the system.

What Does this Mean Going Forward?

Beyond that, use common sense.

If you embrace both positive and negative mentions, and aren’t afraid to use negative reviews as an opportunity to demonstrate your company’s responsiveness, chances are that you will recover from bad reviews.

What might be be more difficult to recover from though is 90 long days being stamped a shady player, or worse, a cheater.

Allen Mireles is vice president at Arment Dietrich and is based outside of Toledo. She has diverse expertise in healthcare IT, manufacturing, and education. You can follow her on Twitter  at allenmireles, add her to your circles on G+, link to her on LinkedIn, or friend her on Facebook.