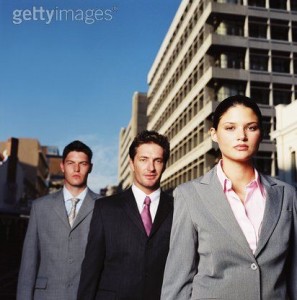 I have a story to tell you. I told Barry Moltz this story this morning and he said, “You should write about that.”

When I started Arment Dietrich nearly five years ago (coming up in April!), I would go to new business meetings and the men in the room would say, “If we work with you, when do we get to meet your husband?” At first I thought it was a social thing. How nice! They want to socialize with both of us.

Then the fateful day happened. I’ll never forget it. Two gentlemen came to our office (there were three of us at the time) and they had on very expensive suits. One of the men placed his Halliburton metal briefcase on the conference room table and said, “If we don’t meet your husband during this meeting, we’ll be working with another firm.”

I said, “I’m sorry, but why would meeting my husband have anything to do with our winning your business?”

He said, “Because he runs the business and we don’t do business with companies if we haven’t met the principals.”

Needless to say, they were escorted out because I was so livid that they actually thought a MAN ran my business!

As I told this story to the men in my life, my friend Mark Allan suggested we created a Remington Steele-like identity for a male business partner. Then my friend Harry Brumleve came up with a name – Charles Arment – and even wrote his bio, which we put on our Web site.

Charles gave me great business confidence and taught me how to negotiate. It was fun “kicking it upstairs” to get approval on what the prospective client was wanting or asking for more from a vendor. I didn’t have to be the bad guy.  Charles was the bad guy. But it also helped me gain more immediate respect because it was perceived a man was running the business.

Then Jeff Wuorio called to interview me about the perception of glass ceilings for women entrepreneurs and I told him the story of Charles. He was so fascinated, he wrote a story about it called “Four ways businesswomen can combat bias.”

When it was evident that Charles was like Remington Steele – made up – I got A LOT of flack. I heard how dishonest it was and that if I could lie about that, what else did I lie about in business. But do you know who made the most stink about it? WOMEN! Men thought it was funny (like I did). Women thought it was terrible and that I was doing a big disservice to the gender.

But in an effort to be completely transparent, we had some fun with it internally and held an obituary-writing contest. Charles died a couple of years ago, but my confidence in negotiations remained. I’ve not once since had anyone ask when they get to meet my husband. And it turns out, we do really good work so we don’t need a man at the top to help with perception issues.

So maybe Del Jones was right last week…behind every successful woman there is a man, even if he’s made up.