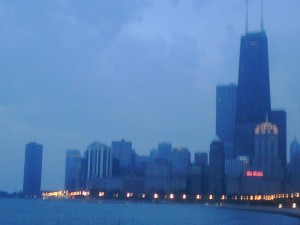 On Saturday morning, I set out with my cycling group to ride at 5:15. The sky was overcast and a bit foggy and the wind was gusting at 35 mph, but the temperature was perfect, the wind was blowing only in one direction (which meant on the way home it’d be at our backs), and it wasn’t threatening to rain until well after we’d finish our ride.

We had a great ride going south, even though it was directly into that wind, and we were all talking about the Bears season and how each of our businesses are faring going into the fourth quarter.

Then it started to pour, but I hiked Pike’s Peak in snow and ice, I certainly wasn’t scared by a little rain.  And it was a warm rain so it wasn’t too bad, despite how filthy I was getting. I was in the middle of the pack and we came upon some joggers. I was at Roger’s tire in front of me and I wanted to get around the joggers before I hit a huge puddle that would inevitably splash water in their faces.

As I crossed the bike path to pass them, I sped up in order to avoid the puddle so I wouldn’t splash them. But my back tire got stuck in the crack in the middle of the path and, because the pavement was wet, I couldn’t recover.

It actually happened so quickly that I didn’t even have time for my life to flash before my eyes. Roger told me the only reason he turned around was he heard the joggers scream and my helmet crack.

I’m okay, but sliding down wet pavement at 22 mph has left me pretty banged up on my entire right side.  So much so that I can’t put on pants because my leg is so swollen (guess I’ll be in skirts all week). And I hit my head so hard that I cracked my helmet in half. It did its job, but it made me think.

What happens to the busines then?

I have a succession plan in mind, but it’s for 40 years from now, not tomorrow. What happens in an emergency?

And then I read Jay Goltz’s blog that had a similar tone.  Apparently I’m not alone in freaking out that the business doesn’t have an emergency plan.

Every year I review my three-page disaster plan which details all of my insurance, banking, passwords, keys, and I include my best guess as to what the options are for successors, buyers, or liquidation.

I make a list of people that I would want my family to use as advisers (and some I would not!). I explain what I would want to do for certain employees if the business is sold or closed. And I include a “get out of guilt free” card that tells my family to move on and not get entangled in any “he would want this or that” strangleholds.

All of these are great ideas and I’m going to add them to my own disaster plan. But I’d like to think the business would continue without me, especially if I do my job right in shaping my staff to become CEOs.

* Have my emergency plan written.

* Create opportunities for every one of my colleagues to be able to take over my duties (speaking engagements, keynotes, social media training, media training, crisis communication, panel discussions, social media for Arment Dietrich, marketing the agency, driving toward the vision, client development, and being the rainmaker) should something happen to me.

* Have discussions with my executive team, and put our decisions in writing, so that my family doesn’t have to grapple with whether or not to sell the business and how to take care of my colleagues.

Now, other than decide on who gets my shoes, what else should I include?