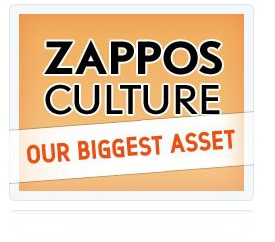 When the Zappos/Amazon deal went through on July 22, my friend Travis Dudfield asked my opinion on the communication to Zappos employees. I told him to let the media storm die down and I would write a blog post about it.

So here it is!

There was A LOT of criticism about how Tony Hsieh communicated the sale to his employees, beginning with the fact that he told everyone they still have their jobs and that he used email, video, and Twitter to spread the message.

I’m not there every day, and I don’t know what it is he is legally allowed to say, or what he’s not allowed to say, but I will tell you that in his letter (see it here) he is as transparent as he can be with an acquisition of this size. And using the social networks to spread the words goes to what he believes in and the core values of the company. So why would he do it any differently?

Let me tell you something that happened at Arment Dietrich at the beginning of this year. Before Thanksgiving last year, there were some insecurities among my colleagues that there might be lay-offs. The rumors were not warranted and I put the kibosh on them, telling all in a staff meeting that there were not going to be lay-offs.

But on Christmas Eve (Christmas EVE!), I received a certified letter from a client stating that, because of the ecomomy, they were terminating our contract effective immediately. Then, right after Christmas, but before the new year started, I received another letter in the overnight mail stating that our largest client was cutting their budget by 65 percent.

I got through the holidays without further incident, but went  back into the office right after the first of the year and knew something had to change or we wouldn’t be able to make payroll by the end of February.

So we laid off. We cut deeper than we probably needed to, but I wanted to be sure the business was in a position to survive any more cuts so we didn’t have to go through that again and so my colleagues could focus on the job at hand and not worry about lay-offs later in the year.

It was not fun. And I got a lot of flack for telling everyone before Thanksgiving that we weren’t going to have lay-offs. Some even called me a liar.

The fact of the matter is that, before Thanksgiving, I was transparent and honest and gave them all of the information I had at the time. No one considered I went through the entire holiday season knowing I was going to have to make a hard business choice after the new year because some of our clients were inconsiderate about the timing of their decisions (even though I understood they needed to happen before year’s end).

I didn’t lie. I didn’t withhold information. I was transparent with all of the information I had at the time.

So even though I’m not in Tony Hseih’s shoes, and my situation was not a major and public acquistion, based on what I know about him and the culture he’s built, the information provided in his communication is what he knows now and can legally tell his employees.

Will they lay off? Maybe.

Will the culture change? Maybe.

Did he share all of the information he could within legal boundaries, as soon as he could? I think he did.