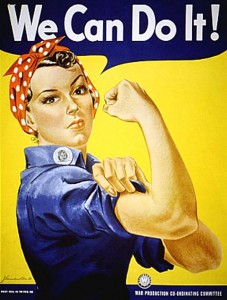 One of my favorite reporters in the entire world is Del Jones, the leadership columnist for USA   Today. I’ve worked with him for many years. I know him in real life. I’m featuring him as a case study in a book (details forthcoming). And I have a daily conversation with him on Twitter.

So when his cover story, “Often, men help women get to the corner office” ran today, I was more than intrigued. As usual, his style of reporting is fair and covers all of the reasons the title he choose might be true.

* There are more men in leadership positions at companies big and small so it makes sense the mentor a woman has is male (only 29 Fortune 1000 companies have women CEOs).

I agree with all of this. I am in a communication business and I’ve only had one female boss my entire career…where females are prevalent at the lower levels, but not at executive levels.

But I am FIRED UP! Why, you ask? I just spent 20 minutes reading the comments. Because there are nearly 200 comments, I started with the most recommended ones.

I am shocked and appalled there are men out there, like Slay and ChristianCon3, who still think women belong in the kitchen and not the workplace. And that people recommended their comments for others to read!

“Not an issue for me since I believe women do not belong in the workplace, but at home tending to the children and the husband. Much of what is wrong with our society today is because of women’s liberation (a product of liberal / socialist thinking) and the idea that women “can have it all.” — family AND career. Well they can’t. Just look at the divorce rates. The crazy, drug addicted children that come out of two career households. It’s high time we get back to a traditional nuclear family: husband who works, wife who minds the house and two or three kids.”

Now I know that by putting this on my blog, I’m engaging this man and his ludicrous opinion. Did he not read the story? The point is that, even in 2009 where women ARE in the workplace and DO have it all, their mentors still are men. That even though we’ve come a long way, we still have to rely on men for procreation and to promote our careers. And that does NOT mean we’re sleeping our way to the top as other comments on the story suggest.

I have belonged to two women-only organizations in the past and have gotten nothing from either of them. No return-on-investment of my time or money. Not one woman from either of those organizations referred business to us – most women see other females as competition. I’ve always kept this in mind as I grow a business – that women deserve as much mentoring as the men in an organization.

But truth be had, the most ROI on my time, the most referrals we receive (even today), and the people who affect my business decisions are men. I have a handful of women business confidants, outside of the Arment Dietrich walls, but I’d venture to guess they’re less than 10 percent of my “mentors”.

Social media is changing that. I’ve been able to connect and engage with women business leaders around the world and we help one another quite often. It’s fun to get a woman’s read on a particular situation because we look at things so much differently. We lead differently. We think differently. We act and feel differently. We should be mentoring one another, without threat, and with a man’s assertiveness and ability to forgive and forget sprinkled in.

With Del bringing this very sad reality to light and with our social media connections, soon behind every successful woman will be another woman.