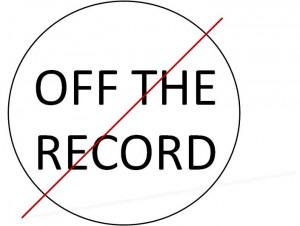 I have an off the record story for you. Many years ago, I secured a feature on 60 Minutes for a client. The story was a three day shoot, turned into 30 minutes for the program, on how catfish are farmed. Catfish, by nature, are bottom feeders. But cotton farmers figured out how to take cotton fields and turn them into catfish farms, which (at the time) was much more lucrative.

A week prior to the shoot, when they would spend three days following catfish from farm to fork, we put our spokesperson through intense media training. Even though I was only mid-level at the time, because I secured the story, I got to sit in on the media training. When I say it was intense, I mean INTENSE. Video cameras in his face. Rude “reporters”. The whole thing. The media trainer wanted to be sure the spokesperson was prepared for every situation and that, even with exhaustion on the third day of shooting, he was still on message.

There was one issue. The Japanese were dumping catfish into the United States and calling it farm-raised. It was a pretty big problem and we had lobbying and regulatory teams working on the issue at the same time this “feel good” story was being shot.  The media trainer worked the spokesperson pretty hard on this issue…wanting to prepare him in case it came up, but also training him not to bring it up.

The shoot went beautifully. It was such a great learning experience for me. Three days of shooting. Learning even more about catfish farming than I knew before. Really endearing me to the client. And then it happened. The video crew was packing up and we were walking the reporter to the elevator. The spokesperson said, “Man! I am so glad you didn’t ask me about the Japanese dumping catfish. Glad we made it!”

Three days of shooting down the tube. In an instant. The story then became about the regulatory issue and not at all about catfish farming. The spokesperson said, “But it was off the record! We weren’t filming anymore! We were finished.”

If I’d been more experienced at the time, I would have stopped the comment mid-sentence and gotten him away from that reporter. I also learned a valuable lesson.

Off the record doesn’t exist.

President Obama learned this lesson earlier this week. If there is a reporter within earshot, it is NEVER off the record. I don’t care if you are the President of the United States or what you have to say is true (Kanye West IS a jackass). A reporter never takes their reporting hat off. And they don’t have to keep anything you say off the record.

If you don’t want it on the news, don’t say it.

Do you have an off the record story?