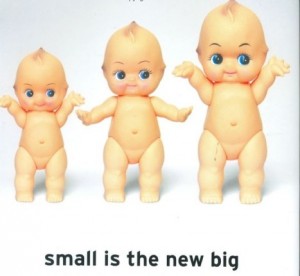 I’m stubborn and I’m a book elitist. For those of you who know me really well, this comes to you as no surprise. I have an English literature degree from a private university. I’ve never read Stephen King because I learned in college that he was for the average reader. It took me a long time before I’d read USA Today because my college advisor told us all the time that it was a newspaper written for those with less than an eighth grade education. He created a book elitist out of me and I have a really hard time breaking that habit.

I tell you all of this because I’ve not read any of Seth Godin’s books. Not because I don’t think he’s smart. Mostly because he’s a New York Times bestseller, multiple times over, and I can hear Dr. Spencer’s voice in the back of my head telling me I don’t want to read what everyone else reads.

Until “Small Is the New Big” was released. I was intrigued. After all, we are small. We compete with the big agencies. Did Godin have something in there I needed to know to surpass the competition? I bought it and ignored that voice in my head.

I love the book! Not all of it, but he even says on the cover that he dares every reader not to find one thing you really love. I found that one thing (and many others).

“The Soy Luck Club, my favorite place in New York, just announced the breakfast club. Pay $40 or so and you get breakfast every day for a month. “Grab and Go,” it’s called. If Vivian sells one hundred memberships, it’s a home run. With $4,000, she can certainly buy a lot of whole-wheat bagels and grapefruit, and send ends up creating a cadre of superloyal customers. Best of all, she starts finding products for her customers instead of finding customers for her products.

Imagine a new chain of cafes that offers a coffee club. For a flat fee, you get all the WiFi and lattes you can handle. With the markup on both, the owner does great, and people would feel terrible every time they strayed.

They say to ignore sunk costs. People are terrible at that, though.”

So I read that and started thinking about all the ways a business could implement this idea. Yesterday I went to pick up Jack Bauer from “camp” and I was very excited because I orginally wasn’t going to pick him up until this morning. But I got an earlier flight home and was able to pick him up before they closed last night.

See the difference in how that makes you feel? And it’s simply changing two words.

Have you seen some examples like the Soy Luck Club? Do you have examples like pet “camp” that can easily be modified for better customer service or engagement? Share here!

And P.S. If you haven’t read the book, I recommend it. I dare you to find one thing you can apply to your business/life/career.