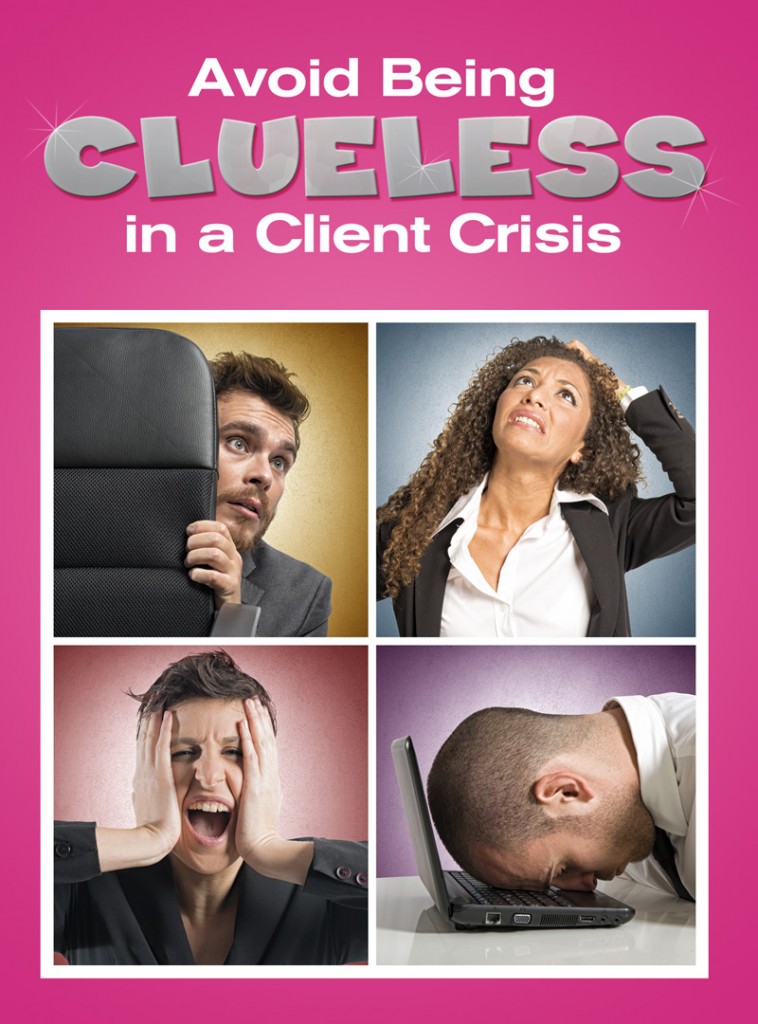 In the 1995 movie Clueless, there is this classic line when the main character Cher calls someone a “full-on Monet.”

Unfortunately, the term “full-on Monet” can be applied to how some organizations and PR professionals handle a crisis.

They gloss over what really needs to be handled.

At first glance it seems fine, but upon further prodding, it’s a “big old mess.”

There are a few tenets that apply to any crisis, and following them can help you or your clients avoid being caught in a state of cluelessnes:.

As PR pros, our instinct is to go into Def-Con 4 mode when anyone mentions a potential crisis situation.

But make sure to take a step back and do a pulse check. Monitor incoming calls and keep tabs on social media channels.

Many times, it could just be an internal issue that won’t have external repercussions … or a media story you think could cause a stir with your target audience, but in actuality has little effect.

Speaking of target audiences: Clearly define who you’re trying to reach and determine the most effective ways to communicate with them.

This is the most under-rated and under-used tool.

It’s imperative to research and thoroughly understand the background of the crisis, craft potential questions that might be asked, prepare viable answers to those questions, and explore potential scenarios.

Most of the time, you don’t have all the puzzle pieces and there are a lot of holes, so scenario planning is key.

Even if it’s not a full-on crisis, preparing from all angles is a worthwhile exercise.

Ask the questions internally before someone asks them externally.

Be Fast and Furious

If a journalist is calling, be the cat, not the mouse.

Staying ahead of the game is important.

If the media doesn’t have a statement or can’t find anyone for comment, they will just go with what they have or can find—and that’s a bad thing.

In most cases, a short and limited response is better than “no comment.”

Also, the media’s day doesn’t end at 5 p.m. – so stay vigilant about outreach and ensure you have all your bases covered. You have a narrow window of response time.

Message Consistency and Dealing with Misinformation

Never underestimate the importance in disseminating a consistent message, which is half the battle.

The other half is trying to contain media inaccuracies. There will be misinformation out there; how you deal with it is part of the crisis itself.

You can denounce how journalism has sunk to an all-time low, but the information is out there and it has to be dealt with.

In the Information Age, there is no such thing as misinformation. Even if it’s wrong, it’s information that is being processed, digested. If somebody eats spoiled cottage cheese, it’s still food that has to go through the body. ‘Misinformation.’ Just because the cottage cheese is bad doesn’t make it misfood.

So don’t be swept away by trying to “spin” your way out of a crisis.

I love this blog (and Gini Dietrich’s book) because of its perfect name—Spin Sucks.

There is no magical statement or person who will spin your way out of a crisis…or anything else for that matter.

Make sure your communications strategy is focused on doing the right thing.

Doreen Overstreet is vice president of public relations at Winter Park, Fla.-based Linda Costa Communications Group and loves 90s movies. She was childhood best friends with Laura Petrolino. Growing up, they both had a passion for stuffed animals and scrunchies, but didn’t know they also would have a passion for public relations.

View all posts by Doreen Overstreet