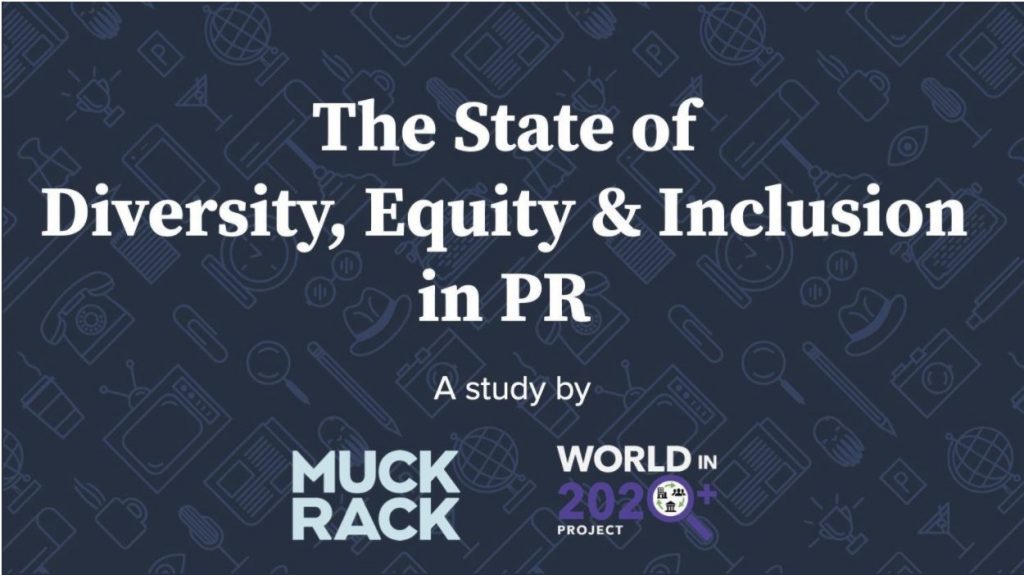 With 2020 coming to a close, it’s probably no surprise that we’re starting to see the word “transformative” appear in much of the content we consume. Aside from being a popular buzzword, it really has been a transformative year for many professionals across industries as they’ve focused on trying to navigate the uncertainties of this year, particularly during the last nine months.

COVID-19 has also contributed to the renewed public conversation about systematic racism and socioeconomic inequities. For communicators specifically, this time of social and political unrest has made it increasingly difficult to advise stakeholders and communicate complex issues to their audiences.

Especially when it comes to internal training and literacy, advising external clients and stakeholders, and pitching stories to diverse audiences, it’s now more important than ever for communicators to be transparent and accountable about their Diversity, Equity, and Inclusion strategies.

A new survey from Muck Rack, The State of DEI in PR, was conducted in partnership with Angela Chitkara, lead researcher of The World In 2020 Project, and advised by Columbia University professor of political science and international affairs Robert Y. Shapiro, offers some revealing statistics on the role PR plays in communicating DEI— internally and externally—and how those strategies have been influenced by political motivations in this election year.

For example, 35% of respondents said more than 20% of the stories they pitch are focused on angles related to DEI, and 25% said they “always” or “usually” pitch stories with political angles. This suggests many do not consider DEI to be a political issue.

We surveyed more than 400 communicators, based primarily in the United States, in roles ranging from account executives at agencies to chief communications officers at major global brands. More than 50% of the respondents are director level or above, while 20% hold C-suite positions at their companies.

Below we explore some of the top findings from the study. 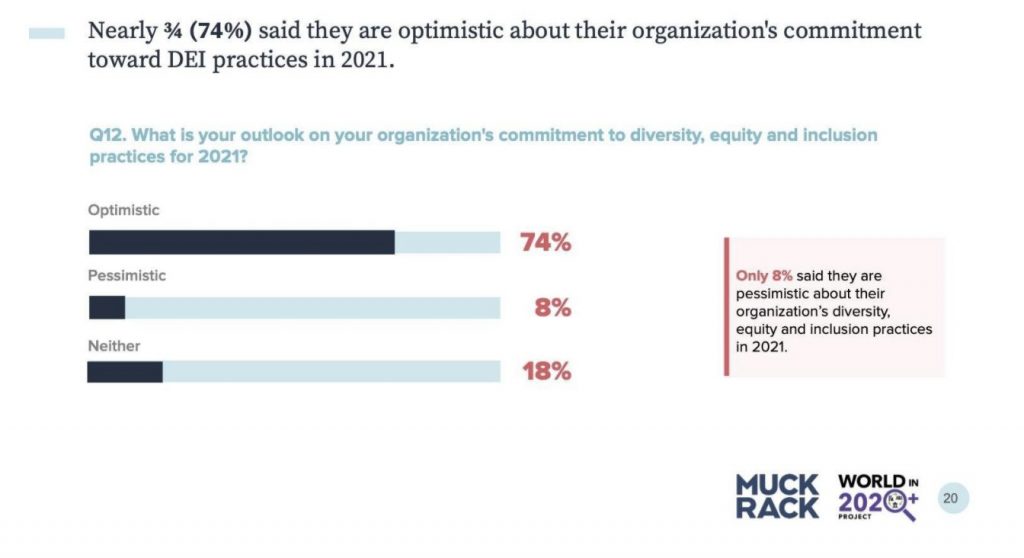 “We have entered an age of stakeholder capitalism in which an organization’s words need to align with its actions,” says Chitkara. “Doing what we say matters, more than ever. And, the data suggests there is a leadership deficit and lack of budgetary resources to effectively support the DEI function across an organization. Today, the lack of diversity and inclusion poses social risks to an organization.”

In addition to limited budget and training, another sign of this leadership deficit is the finding that only 13% of respondents said their leadership informs their ability to provide strategic counsel to their clients, colleagues, and brand stakeholders on issues relating to DEI.

Instead, 39% turn to mission and brand values, while 35% follow what they believe is the “right thing to do.” 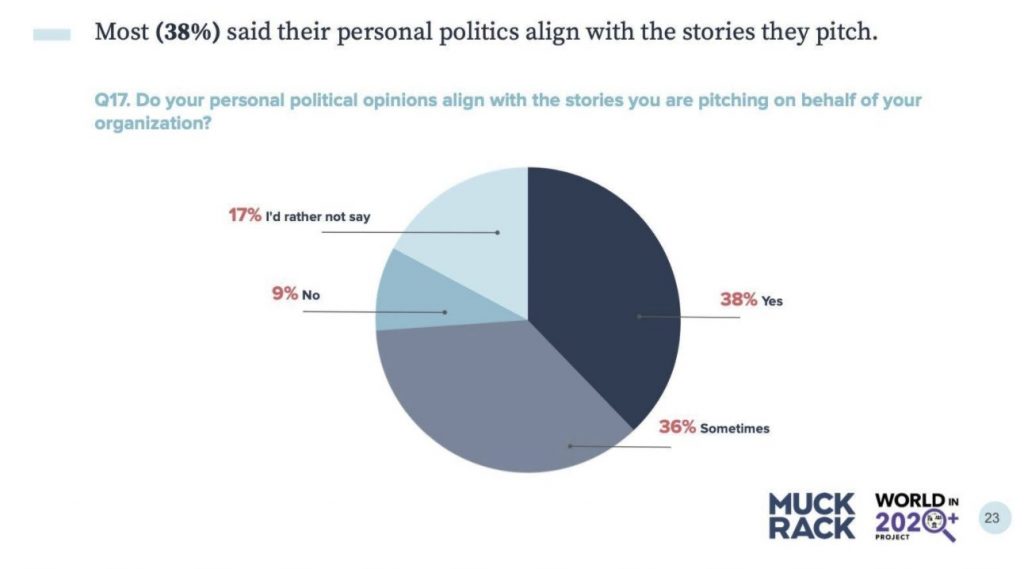 The data here also suggests that PR pros are focused on the near term, rather than long-term strategies tied to the US elections. In theory, they are likely to respond in a reactive way versus proactively at this time.

The Intersections of DEI and Politics

We set out to answer the question, “To what extent do the DEI strategies of communicators intersect with politics through media relations?” 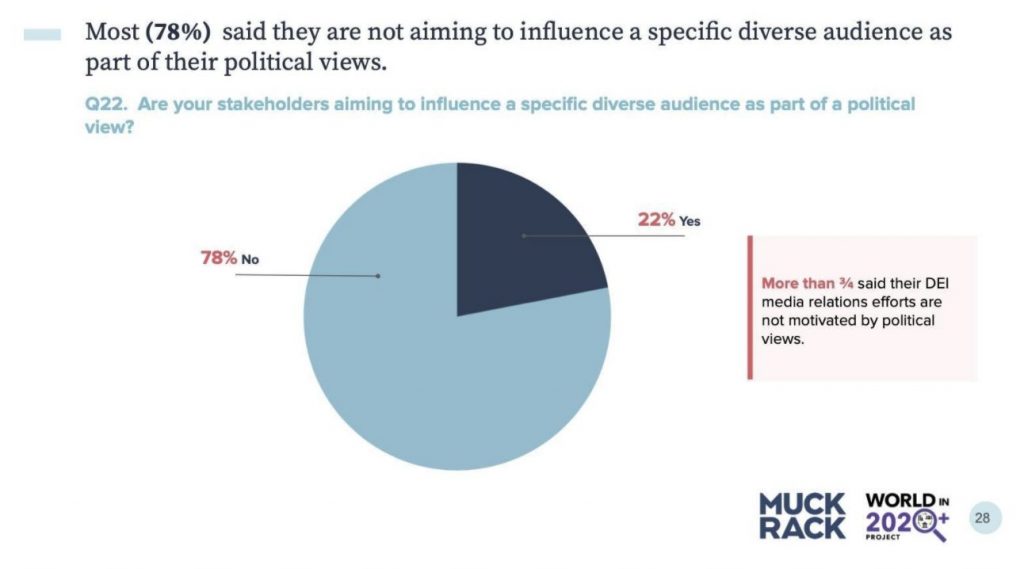 Communicators are often co-architects of the stories we see across the media landscape. As such, they have both an opportunity and a responsibility to influence public perception through media relations and brand communications.

In response to this year’s renewed conversation around systemic racism, more than one-half of those surveyed said that communicating their efforts was their highest priority related to DEI—specifically as it pertains to race and ethnicity issues—above counseling stakeholders on DEI issues, changing the way they pitch stories or changing the partners they work with.

LGBTQI and gender have similar levels of priority as it relates to communicators engaging with DEI issues. People with disabilities ranked as the lowest priority issue, likely due to the fact that the higher ranking issues are receiving more national media attention and are what audiences are most focused on at this particular moment.

It is also important to keep in mind that communicators might be inclined to respond with what they view as the most “socially acceptable” answer.

“The data are consistent with the argument that concerns for racial and ethnic equality reflect inequities in civil rights and socioeconomic status,” says survey advisor Professor Shapiro. “But there is more to it involving conflict and emotions, as current politics suggests.”

Most communicators know that they play an important role in shaping public opinion and ensuring stories that represent marginalized people are part of the national media discourse. However, as our study shows, more training and cultural fluency are likely needed from their organizations.

The results offer an important reminder that our actions must align with our initiatives. DEI work is not a surface or gestural exercise, and the industry perceptions of this work need to be consistent with the realities of what it actually involves.

All that said, the future looks promising. Despite some of the disconnects that were discovered in this survey, the majority of folks (92%) are not pessimistic about their organization’s commitment towards DEI practices in 2021.

Get your copy of the World in 2020 Report here. Keep up with Angela’s work by following her on Twitter and LinkedIn.

Emma Haddad is the PR manager at Muck Rack. Previously, she worked on the business development team as an account executive, helping PR teams at brands and agencies realize how Muck Rack can streamline their efforts and allow them to reach their goals.

View all posts by Emma Haddad