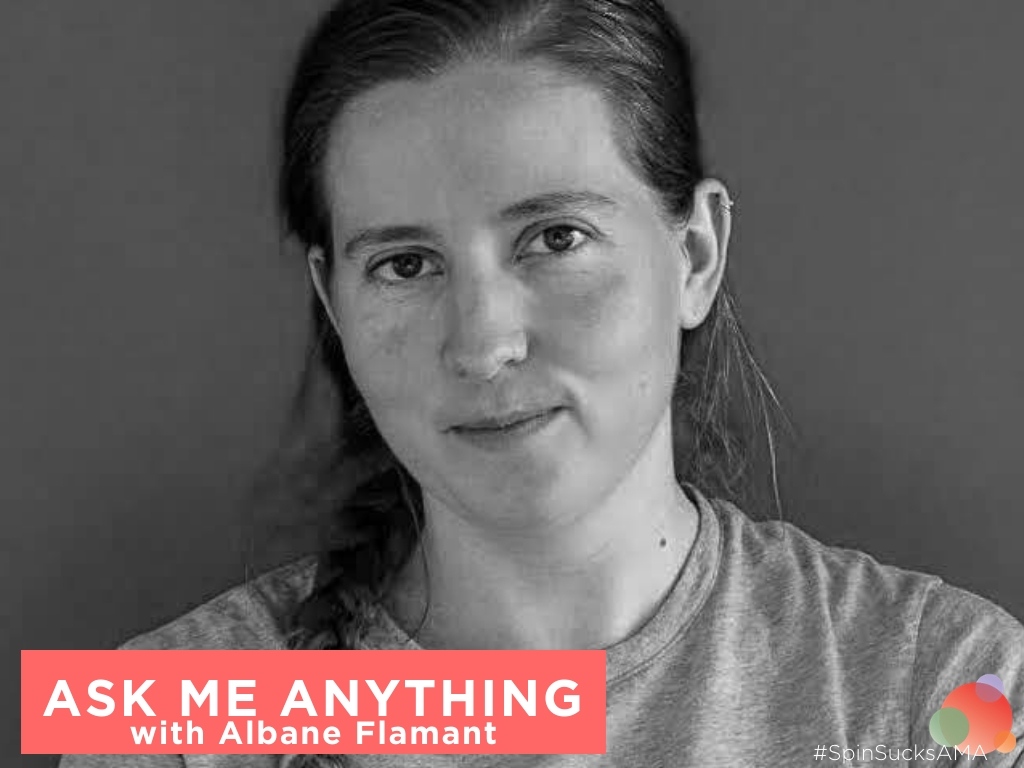 They seem to be everywhere these days.

Throw in the recent documentaries about the Fyre Festival disaster, and it’s hard to go a day without hearing influencers mentioned in some context or another.

But what is an influencer?

How do you use them in your marketing strategy?

And more importantly, what is a pet influencer?

That’s the second most important.

My guess is you have similar questions about influencer marketing and, the good news is, our Spin Sucks Community AMA guest has the answers.

Albane is senior marketing operations officer at Talkwalker, and was lovely enough to participate in our first AMA of the year.

Talkwalker is a social listening tool that helps brands and organizations stay up-to-date on their mentions all across the internet.

They help you keep an eye on potential negative comments and reviews, which might need to be addressed quickly. And you can use the platform to monitor your organization’s reputation.

Or, you could just be like our chief client officer, Laura Petrolino, who really likes to know what brands people mention while vacationing at the beach.

Albane shared their report on the 2019 Global State of Influencer Marketing.

(Heads up, you have to be a part of our free Spin Sucks community to take a look, and you should join us. We talk all things communications, tech, and marketing. It’s a wonderful community to be involved in. You won’t regret it.)

We weren’t surprised our community had plenty of questions about influencer marketing, and Albane did a fantastic job answering them.

She started by focusing on three key areas:

Questions from the Community

Katie Robbert of Trust Insights started things off by asking about whether bots will take over more of social media, and what we can do about this:

The most recent earnings report Twitter revealed that nearly two thirds of its active users aren’t human. How are companies like Talkwalker tackling the massive amount of fake accounts on social media?

Albane let everyone know that while that sounds scary, it’s a trend people are eventually going to see through.

She believed it was linked to influencer authenticity.

A lot of people are worried about influencers that have 50,000 followers, who are going to give you all the tweets, but are not going to drive impact.

So one thing we do is to correlate.

It’s great to have 50,000 followers, but how many are actually engaging regularly with your posts?

Look at the influencer profile and use different metrics to validate how effective it is.

What’s interesting is that you really see reaction from both Twitter and Instagram, for example, against these fake users and fake engagement.

Christopher S. Penn, who I know is a member of the Spin Sucks community, conducted a very interesting study back in December when there was that whole Instagram exchange about the engagement rate of the top top 500 most popular Instagram accounts.

And we saw that it dropped significantly once Instagram got rid of all those bots back in December.

The same thing happened to Twitter in the summer.

We saw a huge drop in followers for a lot of accounts because [Twitter] got rid of bots.

We see these purges of fake followers happening more and more.

So I think social media platforms are becoming more able to spot these bots.

And our role is to provide brands with the right metrics to evaluate these influencer profiles.

Of course we can’t mention the term influencers without thinking of the recent Fyre Festival.

Many of the influencers who helped promote the festival found themselves in hot water when it turned out to be a huge disaster.

Someone from the community asked:

What’s the future for influencer marketing? Are we heading to the day when it might eventually burn out?

I think there are many questions as to where influencer marketing is going.

But I also think that influencer marketing has always existed in some form.

Before, it was only mainstream celebrities who could really have an impact, because everybody knew them.

Now, with social media and all the different channels, you have more and more of these ‘experts’ who have a way to reach loyal communities.

And I think the type of profile that people believe in and trust is going to evolve.

Working with a melting pot of personalities doesn’t come without its challenges.

Social media influencers promote products and services from many industries, so there’s no hard and fast rule on how your specific organization should build relationships or manage them.

What’s the biggest challenge of working with influencers, and how would you suggest communicators manage that?

I think that’s linked to the whole problem of what you are actually trying to achieve with influencer marketing.

So the challenge we’re seeing is brand visibility.

That’s the top objective respondents identified in our study.

How do you identify influencers that we actually increase your brand’s visibility?

I think that speaks to finding more niche influencers.

My favorite part of the discussion might have been when we rolled pet influencers into the mix.

Did you guys know that was a thing?

A member of the community asked:

Are pet influencers a passing fad or here to stay?

Albane was unfazed by the fact that there are plenty of us out there who dedicate entire social media profiles to our pets.

I think that people just like to tell stories and socialize.

No exception to that rule.

So that’s why in addition to pet influencers, you have virtual influencers, which is something we didn’t discuss, but is super interesting.

Some of you in the room know of @LilMiquela on Instagram, who was outed as, you know, not a human influencer.

Back in April 2018, I think. Even though she did advertising campaigns.

I think she she wears a lot of brands.

She supports Black Lives Matter, so she has a whole personality.

She had 1.5 million followers on Instagram, and then she came out and said, “Oh by the way, I’m not human.”

And she has all these virtual influencer friends that she hangs out with.

And it’s actually an agency that’s behind her, and has created the whole personality.

So you could say it’s a stretch, but you could also say the people who created an Instagram account for their pets are kind of creating an online personality for them.

If we still haven’t quenched your thirst for knowledge in the world of influence marketing, leave your questions below. Albane said she would be happy to answer any other questions our readers might have.

And that should tide you over until our next AMA on March 14th. Mark your calendars now!

We’ll be talking to Susan Moeller from BuzzSumo. If you have B2B marketing and communications questions, stockpile them now, because the next AMA is right up your alley.