Have you ever seen something in the news, thought to yourself, “my company fits this topic perfectly,” and then realized that you need to figure out how to insert your company into the cycle quickly?

It sounds like you need to do a newsjack!

However, newsjacking to further your brand’s message and turn your company into a leading industry expert on a particular subject often requires a couple of prerequisites:

This timely and quick turnaround project can yield great results, but if you aren’t quick on the draw, you might lose your chance because of how fast the news cycle changes.

Done well, it can catapult awareness of your organization and cause it to be thought of as a leading player in your industry.

Done poorly, however, and it can be seen as a sad attempt to gain attention during a time of hardship.

This process doesn’t have to be a complete time suck.

I want to share with you how I was able to cut the newsjacking process down from what would typically take a full work day and several people to approximately 5+ hours working alone (including a lunch break!) with a response rate of 10% (compared to an industry-wide average of approximately 3%), and snagged an interview opportunity with Forbes.

I recently started a newsjacking campaign for Global Accessibility Awareness Day, and the following case study shows how I could do that.

The first thing is to make sure you’re targeting the right journalists. Whether you have a media list already or need to make one, having everything centralized in one platform will help this process.

If you already have a media list, perfect, upload it to your PRM.

I made a new one from scratch using Propel PRM (disclaimer: I’m the communications manager there), started researching journalists that previously wrote about Global Accessibility Awareness Day, and instantly added them to a media list I would reference later.

In just one hour, I created a list of 50 journalists to pitch instead of having it take up most of my day and potentially miss the opening.

Then, using the Propel Gmail plugin, I uploaded my pitch and media list to my email quickly and simply. I hit “create drafts”, and all the pitches to all 50 journalists went into my drafts folder, where I could customize each pitch to every journalist as needed. 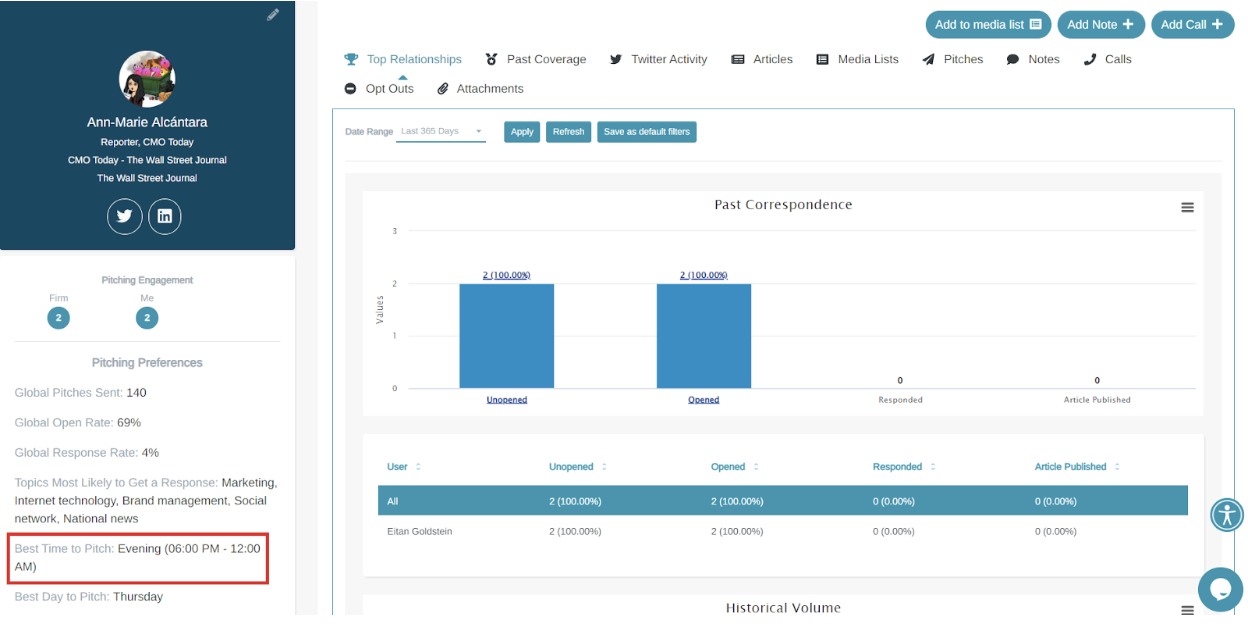 I also scheduled them to go out based on each journalist’s personal email preferences and the time of day they were most likely to open it.

As you send the pitches, you can see which ones have been opened, by whom, and how many times they were opened.

The more opens a pitch receives typically indicates a higher interest on the part of that journalist. They might be asking their editor to see if they can interview their client or just trying to think of how to insert you into the story.

This is exciting, but you don’t want to jump the gun here. If they still haven’t reached out after opening the pitch a significant amount of times (think more than 10), wait about seven or eight hours and then send them a follow-up email depending on the time zone.

This is a newsjack, so you might want to push a little harder than you would for a standard pitch.

In the end, after investing a little over five hours into the newsjack, I was able to:

Without speed, you’ll miss the wave of the news cycle and, along with it, the opportunity to become a thought leader in your industry. So get yourself ahead of the pack by significantly cutting down on the time between when news breaks and when your organization can comment on it. It may make all the difference.

By the way, Propel has a free tool so you can actually do everything I did yourself, for free, even if you are using another database. Check it out, and I can’t wait to hear all the newsjacking success stories!

View all posts by Eitan Goldstein