When people think of political consultants, they often think of TV shows such as “Scandal” or “The West Wing.”

When the job’s done right, though, there are a lot less fireworks.

I didn’t plan on owning a political consulting firm when I got my start in politics about 10 years ago.

But some good instincts and a willingness to respond to emails at midnight have helped my firm grow.

Whatever job you’re doing, chances are you’re doing some kind of public relations every day—every time you communicate with people.

Here are eight simple tips which have an origin in politics, but can be applied to anything.

That side issue you think may be no big deal?

Well, research might reveal that it is a big problem, even before you’re in the field with your messages.

Conducting large scale polls and focus groups can be time-consuming and costly.

But doing a simple survey to ask for input can give you valuable information.

For example, if you’re considering a new initiative or message framing, ask for opinions from the audience you’re trying to reach. They may see things you didn’t even realize were possibilities.

There’s bad news for those of us who revel in the written word: not everyone shares our joy.

In fact, the majority of website visitors spend less than 15 seconds on a webpage.

As professional communicators, you know most people won’t take the time to look up words in a dictionary or read a long, complicated explanation.

What you may not know is just how low the bar is set.

The Washington Post noted 40 percent of Americans have only basic literacy skills.

Good campaigns inspire and make people feel like they’re making a difference. They can also offer opportunities for relationships with people of like mind.

Barack Obama, Donald Trump, and Bernie Sanders all ran campaigns which were exemplary in energizing their supporters.

Even Senator Sanders, who didn’t win the presidential nomination, far surpassed expectations in votes and fundraising.

The takeaway for non-political PR?

Examples include the Dove Campaign for Real Beauty, which promotes self-esteem.

And Irwin Tools’ National Tradesmen Day, which celebrates men and women who work in the trades.

Don’t Try to be Everything to Everyone

It’s been a truth of branding for years that you can’t be all things to all people.

In fact, if you try to do this, it’s entirely possible nobody will like you.

And yet, for years politicians have been playing it safe and trying very, very hard to ignore this advice.

Like him or loathe him, Donald Trump understood that the power of his brand was in his authenticity. And that very authenticity would give immense power to supporters and foes alike.

Another example, I live in California. But not necessarily the California you imagine.

I reside in Placer County, which is part of a more rural region we call the North State. Many of my friends have shared some version of the meme below. 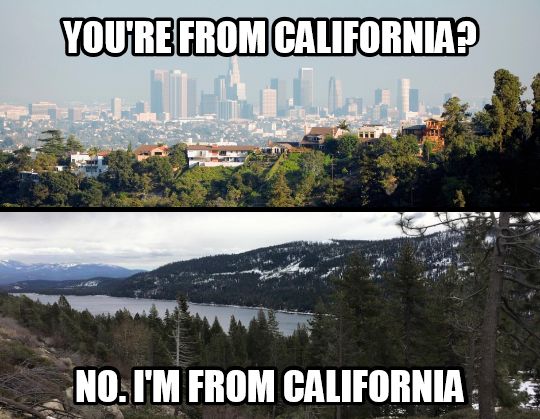 Just as what works to reach millennials on Instagram likely won’t work in more-traditional media channels like national broadcast media.

In short, know your audience well enough not to sound like an outsider. And have a strong enough voice and message to risk some blowback.

In politics, some events capture widespread attention and lead to discussion. We refer to these as “focusing events.”

Not long ago, one of my most successful campaigns was the happy recipient of a random focusing event.

We were working in opposition to a tax increase, and the timing coincided with the beginning of the national Tea Party movement.

The Tea Party got its start after a now-famous Rick Santelli rant on CNBC.

His comments prompted huge rallies around the nation, with people calling for lower taxes and a more limited government.

The Tea Party volunteers that grew out of that event were among our most enthusiastic advocates, resulting in a stunning 2-1 defeat for the tax proposal despite our side being massively outspent.

The takeaway for non-political PR pros is there’s power in focusing events. And, you don’t need to wait for them to happen at random.

For example, you can use holidays and observances, ranging from serious to silly, to leverage interest and discussion.

And you can even use unexpected or surprising announcements tied to items already in the news cycle.

The public attention span shifts quickly. And even well-executed focusing events can give way to new concerns in a hurry.

The advent of the 24-hour news cycle, combined with social media, has served to accelerate the pace of public relations in ways practitioners of 20 years ago could scarcely have imagined.

When reporters (the ones that are left!) call with an interview request, they’re usually on a deadline.

And if you don’t respond right away, you may miss your chance to be a part of the story. Or even worse, the news may report that you didn’t respond with a comment.

None of this is new.

But what is new is that your overall ability to generate big, mainstream media hits may be compromised because media outlets under strain have cut resources.

Being able to quickly respond to press inquiries with a well-prepared response used to be a hallmark of professionalism. But today, it can be the difference between a breakout media hit and no coverage at all.

That isn’t to say you should ignore questions. Instead, you must prepare what you want to say ahead of time, and keep returning to those points you want to emphasize.

The Charisma Matrix recently shared an exchange between President Trump and ABC’s, Jon Karl, as an example of Trump’s skillful handling of a question on government workers not being paid during the shutdown.

Whatever side of the political aisle you are on, watching the exchange provides some useful lessons. It shows the President using the opportunity to draw discussion back to the issue of security in a way that is authentically Donald J. Trump.

The Same, But Different

Whether you work the political side or not, communications is evolving at a speed few industries outside of technology can fathom.

While large swaths of our jobs are unpredictable, public relations as a whole has become more democratic.

And in this environment, broad best practices can help elevate even a run-of-the-mill campaign to something generating special results.

Photo by Jomar on Unsplash

Eric Eisenhammer is CEO of Dauntless Communications, a political strategy and web development company based in Roseville, California, serving clients in the Western U.S. and around the country.

View all posts by Eric Eisenhammer