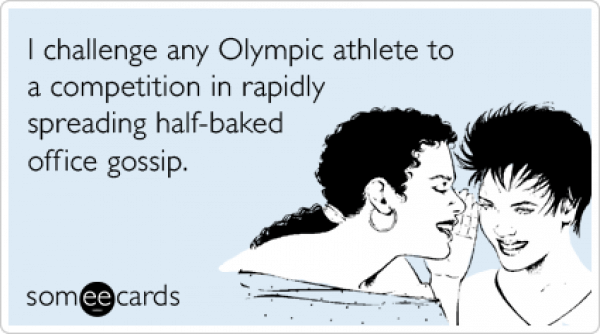 With more than 15 years of working experience, I’ve experienced office gossip on some level, and have even lost a couple of jobs after falling victim to it.

As a result, I’ve been tainted by my own negative experiences with it.

However, is it possible that office gossip can be beneficial or even indicative of a company’s culture?

Merriam-Webster defines “gossip” as “information about the behavior and personal lives of other people,” which is a fairly neutral description of what some may consider a four-letter word.

Supporters of office gossip state that doing so displays concern for others and their well-being.

It has even been shown in a 2012 study that office gossip reduces stress, prevents exploitation, and promotes more generous behavior.

So, can office gossip be good, or is it just plain bad?

Imagine a group of friends who regularly gather around the water cooler at work as a daily ritual.

All of a sudden, one of them isn’t there for an extended period of time and isn’t even at their desk anymore.

Concerned for the absent employee, the workers begin to chat about the fate of their co-worker amongst themselves.

A positive office gossip exchange would go something like this:

“I haven’t heard anything on my end. Has he called you?”

“No.  I hope everything’s alright.”

“I’ll give him a call after work and let you know.”

By definition, those discussing the absent employee would be considered “gossiping,” but can it be described as negative?

The shared concern for the well-being of a fellow co-worker can hardly be construed as negative office gossip, as it didn’t pull apart his character or defame him in any way.

In 2010, Forbes cited that positive office gossip has many benefits for employees, including building camaraderie and trust among teammates that are in the loop.

Normally silent employees who harbor the same concern for their co-worker may even feel validated to voice their concerns, thus furthering camaraderie and trust among team members.

So when does office gossip cross over into the realm of destruction?

In stark contrast, negative office gossip would be the same scenario above, but with harsh, unflattering exchanges about the missing employee.

A negative conversation about the missing employee would go something like this:

“I heard he was arrested over the weekend.”

“It probably didn’t help that he came into work drunk all of the time.”

“He came into work drunk?”

“Yes, and he even hit on the receptionist once.”

“I bet his wife wasn’t too happy about that!”

This is where the big difference lies: Speculation about the worker’s well-being is considered positive, whereas calling him a “drunk” and otherwise steered the conversation into negative territory, where it escalated quickly.

Where positive office gossip would build trust and camaraderie among team members, negative gossip’s slanderous nature only serves to divide.

Tight collaboration among team members is actually coveted in some technology companies.

Firms such as Mozilla and Facebook use custom work areas that encourage collaboration and personalization as a testament to this trend.

Work cultures, such as these, place a strong emphasis on both personal and team efforts.

Strong teams display both trust, appreciation of diversity, open communication. and the big kicker: Giving each other the benefit of the doubt.

This includes showing respectable concern for an unexpected and extended team member’s absence, and respecting their privacy when requested.

If this doesn’t happen at your new office, it could be a sign that negative office gossip is running rampant.

To simplify, is human empathy and respect a part of the discussion?

Do you think office gossip can be beneficial? Let me know in the comments below.

Robert Conrad is a former business student and current mentor for at-risk youth. When he's not working or writing, he can usually be found firmly planted in front of his Nintendo.

View all posts by Robert Conrad