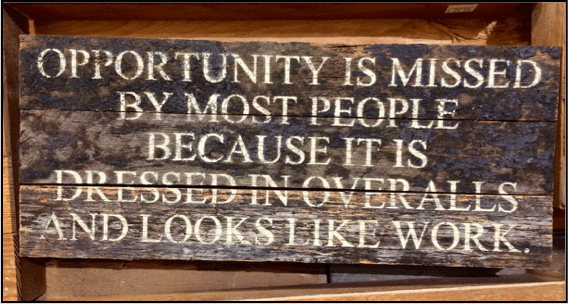 Is your work ethic ordinary or extraordinary?

This academic year more than two million college students will graduate and enter the workforce.

According to the National Association of Colleges and Employers, the top personal qualities employers are looking for are the ability to:

These are important skills, but the best performers will also have another trait that separates them from their peers—a strong work ethic.

More specifically, they understand the value of incomparable performance, a positive attitude, taking the initiative and dedication.

You are hired to do a job and employers expect you to do it well, meeting standards (at a minimum) and (ideally) exceeding expectations.

I’m reminded of a story about Booker T. Washington, the first principal of Tuskegee University, and how his work ethic paved the way for a successful future.

In his autobiography, Washington tells the story of his struggle for an education.

He left home in West Virginia determined to get to the Hampton Institute some 500 miles away.

He finally arrived, dirty, tired and with no money.

His initial meeting with the head teacher didn’t go well, as she quickly surmised he was not the kind of student Hampton wanted.

However, she didn’t tell him to leave, so he stayed.

A short time later, she told him a recitation-room needed sweeping.

He swept the room three times, and didn’t stop there.

He dusted all the furniture, and thoroughly cleaned the entire room, including every corner and closet.

When the teacher came to inspect the room, she was unable to find one bit of dirt.

Washington’s hard work and performance that day gained him entrance to the institution plus a job offer as the janitor that he eagerly accepted.

He worked hard as a janitor and student, and graduated in 1875.

Reward and appreciation are the results of extraordinary performance.

Optimism is a force multiplier and your attitude can have a profound effect on yourself and those around you.

A positive, “can-do” attitude makes you feel better and helps you be more productive.

In fact, The Mayo Clinic lists a number of benefits from positive thinking including reduced stress; better psychological and physical well-being; better coping skills; and even increased resistance to the common cold!

What’s more, your positive attitude is contagious and increases the morale and productivity of others.

In other words, people will think you are smarter if you smile more.

Bottom line—a positive attitude makes you healthier, more productive, appear smarter, and someone people want to be around.

As soon as you have been trained and are familiar with your job responsibilities, get after it.

When you see something that needs to be done, take the initiative and do it…and do it well!

As the “Mayor” of Bagram Air Base in Afghanistan, I was essentially the city manager responsible for a remote, sprawling military compound that included all living areas, operations centers, maintenance facilities, and a decaying two-mile long runway.

It was a challenging environment working under austere conditions.

I was fortunate to be deployed with an incredible group of Airmen who worked hard and didn’t wait to be asked to do something.

It was common for everyone to pitch in and do what needed to be done whether filling sand bags, picking trash out of concertina wire, or re-supplying bunkers…all in addition to their assigned duties.

As a senior leader, it was also my responsibility to set the example.

When people saw the colonel doing these things, they jumped in to help.

No matter what your job requires, do it well and keep in mind no task is beneath you.

Take the initiative and go the extra mile.

Josh Lewis is a college student with an extraordinary work ethic!

This 19-year-old pizza delivery driver was featured in a USA TODAY article because he went above and beyond in his job.

Josh was “carjacked, robbed, and seriously stabbed,” and yet he still managed to make his delivery.

Granted, it was a hospital that ordered the pizza, but he remained focused on finishing the job before collapsing due to his injury.

His manager lauded his work ethic; not just because of this incident, but because he was always reliable, responsible, prompt, and “a great worker.”

There are a number of other attributes that separate the ordinary employee from the extraordinary.

Integrity, treating others with respect, and having courage to do the right thing are among the top in my mind.

As a general officer in the Air Force, I was often asked how to get promoted, recognized, and rewarded.

My answer was always to do the best possible job you can and focus on serving others.

In other words, have an extraordinary work ethic. The result—you will be well paid.

Les Kodlick is a corporate communications consultant and motivational speaker who actively supports the Daniels Fund Ethics Initiative at the University of Colorado Colorado Springs, and also serves on the UCCS Communication Department’s Community Advisory Board. A retired Air Force brigadier general, he is a recognized leader in strategic communication, planning, and executive training. He has successfully led organizations, businesses and corporations through product launches, branding initiatives, budgetary challenges, natural disasters, environmental issues and major crises; and represented several Fortune 500 clients while working with an international public relations firm in New York City.

View all posts by Les Kodlick