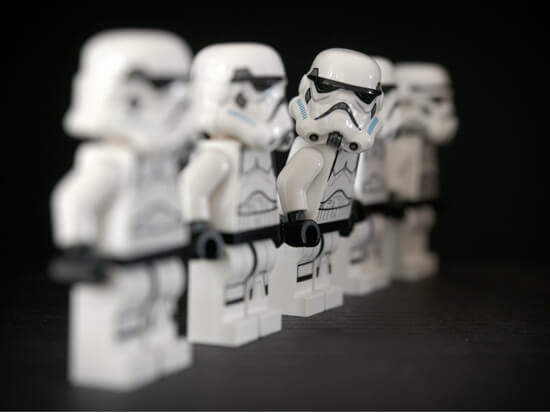 While entertaining audiences all these years, the Star Wars enterprise has also been a great lesson in content marketing.

A close look at the Star Wars films reveals that most of the qualities that make them successful are the same elements that make up effective content marketing programs.

Disney has built on the legacy of George Lucas, while being innovative in their marketing.

As such, there are vital lessons for content marketers to learn by looking at how they marketed the latest release, “Star Wars: The Force Awakens,” and how they are starting to build buzz for the next installment in the series.

Before we look back at The Force Awakens, let’s see how the buzz is building up surrounding the December 15, 2017 release of Star Wars: Episode VIII.

Significant effort has gone in to ensure there aren’t any leaks to the movie plot, though there are some videos around that hypothesize about the details and the plot such as this one by Nerdist.

The small details that are revealed get the super fan excitement levels higher and make even more people want to watch the movie.

The success of the Star Wars franchise has been such that the audience itself begins hypothesizing about future editions.

Know Your Audience and Engage Them

What Disney did first to market “Star Wars: The Force Awakens” was to identify its different audiences.

And once they did that, they went about targeting each of them brilliantly with high-value content.

Star Wars fans had many questions about “The Force Awakens” that kept circulating through the social networks.

Disney understood the opportunity and began answering fans’ questions in the months and weeks before the movie was released.

Those answers successfully engaged the audience.

But the smartest way they satiated the fans was by releasing pictures from the production and casting, and giving them a sneak peek into what goes on behind the scenes of these beloved films.

And even smarter, they invite fans to create similar images.

This fan image unveiled in November 2013 got fans excited because it had R2-D2.

The fact that fans were behind the picture also created headlines.

When production began, they began releasing snippets of the filming including the all-time popular first slate by JJ Abrams.

Images continued to trickle out all through the production process, which helped build up massive anticipation for the release.

And thanks to these thoughtful efforts:

Thanks to their effective PR planning, Disney needed to spend much less on conventional marketing and advertising.

Knowing and engaging your audience is a tried-and-tested strategy that produces results.

In fact, this strategy works even in the most boring niches.

Drawing parallels to prior content, if done in an intelligent manner, can work to build interest.

There were several similarities with the original 1977 Star Wars film in the plot:

Due in part to these and many other elements of the plot evoking memories of the 1977 movie, Rotten Tomatoes gave the movie a 95 percent rating while the Internet Movie Database (IMDB) gave it 8.7 out of 10.

Disney succeeded by blending the right amount of the past with the present and crafting an innovative progression of a recognizable universe.

It’s important to note each Star Wars movie answers questions raised in the previous movies and poses new questions too.

It was no different with The Force Awakens.

Most of these questions involve Rey—they involve her background and her parents, and the reason behind Luke’s lightsaber calling to her.

There were also questions about the identity of Finn and the reason behind Ben Solo becoming Kylo Ren.

This strategy helps engage the audiences because they want to know how these questions are answered in Episode VIII, the next Star Wars movie.

Or perhaps some of them could only be answered in successive editions.

Either way, it makes the audience want to see the next edition, and you can’t have better content marketing than that.

Telling a continuous story is very effective as a content marketing strategy.

The content you create must be consistent, and engaging enough to generate excitement and interest long-term.

Remember what we said about the audience hypothesizing about the plot?

Well, they don’t just hypothesize, they also talk about it on social media.

There is something about the Star Wars series and characters that connect emotionally to people.

For most fans, the fascination began in childhood.

Though your business may not have the reach of Star Wars, if the content is relevant, useful and connects with your audience, you’ll be able to attract, capture, convert and delight them, causing them to become promoters over time.

So how do you create engaging, useful, and relevant content?

Focus on various kinds of content marketing, like Disney does, and not just one or two channels.

You have text, audio, video, apps, and games as well as branded experiences to explore.

Disney focuses on all these, which actually helps them to maximize the audiences they are able to reach out to:

Create as many diverse content channels as your infrastructure and investment permit.

Yes, it’s easier for Disney to do because it has its business interests in nearly every channel, but you still have many options open to you.

Focus on diversifying your channels in a strategic manner.

This can help you cross-promote your products, and you can use one channel to promote the other.

Consistency and Innovation Are Key

Consistent and innovative branding is integral to strategic marketing.

This, along with the skill to adapt to new audiences and technology can help you attract more targeted audience and build an enduring brand.

Noticed any other cool content marketing strategy that Disney employed to market the Star Wars brand?

Feel free to share your thoughts in the comments section below.

Catalin is the founder of Inspired Mag and Mostash, and his current obsessions are Sun Ra and matcha tea.

View all posts by Catalin Zorzini