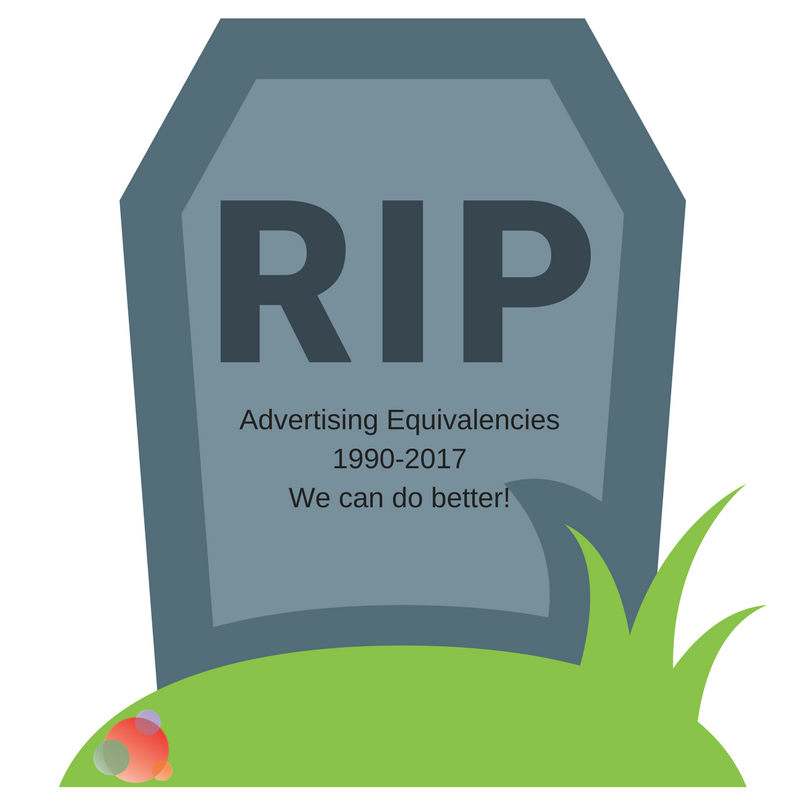 A few weeks ago, a friend was going through intensive interviews at three agencies, looking for the next step in her career.

While she was mostly enthralled with all three, during the last interview with one (she wouldn’t tell me who—probably because she knew I’d blog about it), they asked her how she measures the work she did.

She went through her description of the PESO model and the metrics she’s used in previous jobs.

When she was finished, the vice president asked her, “But what about media impressions and AVEs?”

She said she sat there, tongue tied, because she wasn’t sure how to respond. She ended up saying, “I believe those are vanity metrics and we do our clients a great disservice by reporting on them.”

During a conversation right after the interview she told me she didn’t think she was going to get a job offer from them because of her response (she didn’t).

Of course, I attempted to talk her off a ledge because, really, who wants to work for an agency where they place importance on these two things as “metrics”?

The Death of AVEs is Imminent

As it turns out, if you live anywhere but the U.S., by this time next year, you will be in trouble for using AVEs as a metric.

Two months ago, AMEC announced they are going to invest “significant time and resource to finally kill off this derided metric.”

In a paper published on the topic, among the requirements of AMEC members includes:

In direct response to AMEC, the Chartered Institute of Public Relations took it a step further and said any member using AVEs will be banned from the organization.

The new guidelines will be presented to the CIPR Council in September.

Members will have one year to complete a transition to valid metrics.

If, after that time communicators are still found to be using AVEs, they “may be liable to disciplinary action.”

What is Earned Media Value?

All while this is happening, industry vendors, software providers, and agencies have come up with a new metric: Earned media value.

Apparently earned media value is calculated by multiplying the reach of a piece of content by the cost per so-called impression.

Any time we use a flawed metric, such as impressions, we’re already in trouble.

But then a multiplier is added to the calculation, based on the likelihood of conversion.

The good news is we’re thinking about conversions.

The bad news is this is a mutation of AVEs—we’re using a multiplier of reach and impressions versus measuring column inches.

This makes our entire industry look like a bunch of loons.

You know how communications is typically the first to be cut in a down economy?

All of our marketing brethren have figured out how to measure their efforts to real business results.

And we’re still trying to prove effectiveness by taking reach and impressions and multiplying it by the likelihood of conversion.

Not by actually generating qualified leads, nurturing them, and converting them.

It’s too abstract—and it means nothing.

In a demo with a software vendor a few weeks ago, I asked if they could link to the client’s customer relationship management software.

The sales guy said, “No. We don’t do that because we don’t believe PR should be responsible for sales.”

(Still trying to figure out what to say.)

Because I was still filtering through every statement in my head before speaking, he took my silence as a cue to keep talking.

He said, “We believe in two things: 1) The new earned media value that provides a conversion likelihood; and 2) A metric on share of voice.”

Needless to say, I ended that demo fairly quickly and I won’t be recommending them to anyone.

But therein lies the problem.

If software vendors promise we can track metrics and show real results, and this is what they give us, the industry will not evolve.

PRSA Needs to Take a Stance on AVEs

Back to my friend who was rejected by the global firm because of her stance on AVEs, she was able to find her dream job.

She was able to stand behind her belief that PR can—and should—drive sales.

That media impressions and AVEs are metrics that should never be mentioned in 2017 and beyond.

But her feelings were hurt that she’d fallen in love with that agency, only to discover they’re stuck in 1990.

I’m proud of what CIPR and AMEC are doing to condemn those who are using AVEs.

I hope this agency has an international presence so they are liable to disciplinary action next year.

Now it’s time for PRSA to step up for those of us in the U.S. and require the same.

We cannot—and will not—be taken seriously if we continue to evolve media impressions and AVEs and not measure the things that really matter.