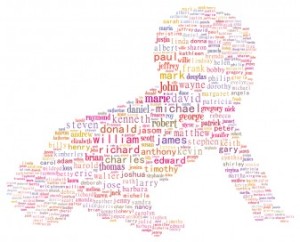 This is a couple of weeks old, but I can’t stop thinking about it…

A start-up called Belly Ballot created a contest to pay an expectant mom $5,000 to let the Internet name her baby.

It goes something like this: Natasha Hill was having a hard time deciding on a name for unborn child, which is due in September. She also had some credit card debt she wanted to wipe clean and start saving for college tuition before the baby was born. So she entered a contest to let total strangers name her baby.

The catch? She only gets the cash if she actually gives her child the name the Internet voted most popular.

The blogosphere was all up in arms about it: “A real mom wouldn’t let complete strangers name her baby!” and “Quick! Someone get her a baby name book!”

It turns out the blogosphere was right. A real mom wouldn’t let complete strangers name her baby.

Natasha Hill is an actress hired by Belly Ballot to create publicity (and that they did, starting with The Today Show and growing into New York Daily News, BuzzFeed, MSN, and blogs galore) and she’s not even pregnant.

Nope. Not pregnant. It was a hoax.

When asked why they did it this way, founder Lacey Moler said, “We came up with the idea for the contest and we knew it would be controversial. We’re a start-up and we wanted to control the situation. We never thought it would get this big.”

I’ve read just about every story I can find about this. I’ve read the story of how Belly Ballot was created. The founders seem like genuinely good people who have a cool idea for a company and just want it to succeed.

Some tips for Lacey, her team, and any other organization looking to use social media, traditional media, and events to create brand awareness and build your reputation:

Perhaps there is a second blog post in what Lacey and her team do now with all this reputation management they have to do.

Now I leave it in your court. What advice would you give the Belly Ballot team?