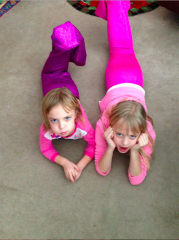 My seven-year-old niece wants to be a mermaid when she grows up.

So much so, in fact, we bought her and her sister mermaid tails for Christmas (as shown in the photo above) and I’m fairly certain it was the gift of the century.

She really believes this is a career to be had by grown women.

But it got me thinking…how many of us are doing what we dreamed we would do at that age?

To find out, I took to my Facebook page and asked. Nearly 160 of you answered.

Now I have the fun job of taking all of that content and putting it into something easy for you read.

To get there, I had Mr. D read me all of the answers and I compiled a list. One thing to note: If the person listed more than one thing, he combined them all into one job (firefighting waitress, for example).

Some of these are really funny.

Please allow me to introduce a great variety of childhood dream jobs.

If you can believe it, there were multiple people who wanted this job.

I guess this isn’t so uncommon!

We had lots of professional sports players.

And now it’s your turn. What did you want to be when you were seven years old?

P.S. If you’d like to see all the color commentary attached to these childhood dream jobs, you can find it on my Facebook wall.