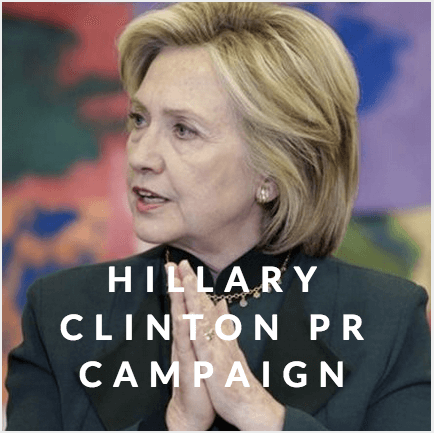 I always hate to talk about politics or political candidates here because the comments inevitably turn into a debate over one of the two things we’re not supposed to talk about in public (religion and politics).

You see, you’ll never change a person’s mind about those two things and they’re meant to only frustrate the other party when discussed (unless, of course, you agree).

I say this because I want to talk about the Hillary Clinton PR debacle—I mean, communications campaign—she has employed and I don’t want it to devolve into a political conversation.

The first thing the Clinton PR team did is hire Kristina Schake, a former aide to Michelle Obama.

Schake helped shape FLOTUS’ public image into that of someone who is extremely accessible. She shops at Target, wears clothes from J. Crew, and loves to garden and read and cook.

She is relatable to nearly every woman and it was part PR campaign that got her from Harvard Law School graduate, University of Chicago assistant dean, and volunteer for many of Chicago’s finest organizations to everyday woman.

Because of that huge success, Clinton hired Schake to do the same for her.

When Clinton ran on her experience and hard exterior, she took a beating with President Obama calling her, “likable enough.”

To bring out her softer side makes sense.

But this is a woman who has worked with some of the world’s most controversial leaders. She lives in an affluent New York City suburb. She commands a speaking fee of more than $200,000. And her reputation precedes her.

She’s not an everyday woman.

The most relatable thing about her is her husband cheated on her—in front of the entire world—and she had to make a decision about her family and her marriage. While we all watched, judged, and decided for her.

Then, when she announced her run for the presidency, she released a video called “Getting Started” that features people getting ready for changes in their lives.

There is a family getting ready to move, brothers opening a business, a mom going back to work after being home with her kids for five years, and a gay couple getting married.

From the outset, they do a nice job of talking to everyone, no matter your gender, race, or sexual orientation.

It looks as if she is for all people.

What’s interesting is this story unfolds all before Clinton appears, in an attempt to look like she’s just one of us, fighting the top one percent to regain financial and class equality in this country.

If you haven’t yet seen it, take a look. We’ll wait.

But the script is jilted, her message is off (she’s not just getting started…she’s been in politics for two decades), and she isn’t relatable.

The Clinton PR team is trying to make her someone she is not.

The Trip to Chipotle

After the video was released, a tip was phoned in to an Ohio reporter that Clinton and her staff had stopped at Chipotle for a burrito bowl.

Though the Chipotle staff didn’t recognize her, the manager reviewed security footage and discovered that, yes indeed, Clinton was there…in dark sunglasses and a bright pink shirt.

Though the trip went unnoticed until after she left, it was another attempt of the Clinton PR team to make her look like an everyday woman.

Just stopping a Chipotle for my burrito bowl. No big deal.

And now—and the reason I decided to finally write about—Clinton has opened her Twitter account to small business owners (particularly women) to talk about what it’s like to build a business in today’s economic climate.

And, of course, she talked about Clinton.

From Mary Jo’s perspective, this is an incredible opportunity. She just got her 15 minutes of fame…and then some.

But does the Clinton PR make her more relatable and softer…more than “likable enough”?

The Twitter takeover is just one of several publicity stunts we’ve seen so far.

For Mother’s Day, she made phone calls to five moms in Nevada, Iowa, Colorado, Washington, and Minnesota (states that are, of course, important electoral battlegrounds).

Next she’s going to raffle off a trip to meet her on the campaign trail: Two winners will each receive two round-trip tickets to attend a campaign event with Clinton, plus two nights hotel accommodations.

We live in a world where transparency and authenticity are more important than ever before.

For those of you who have been doing PR for more than eight years, you’ll remember that a lot of what we did before social media was message creation and training.

Though it’s still important for everyone in the organization to describe the business the same way, we can no longer get away with things such as block and bridge during a media interview.

We can’t make our culture sound exciting, only to work people 24/7.

We can’t pretend to be someone we are not.

Though I’ve heard Clinton is almost more charismatic and charming than her husband, to try to relay that image now is communications suicide.

Yes, she may be just “likable enough,” but she’s experienced, she’s hard-core, and she seems to have very thick skin.

That is the type of president I want. Not someone who can talk mom to mom with me or go shopping with me or take yoga classes with me.

No amount of PR can make you someone you’re not.

The Clinton PR team is wrong.