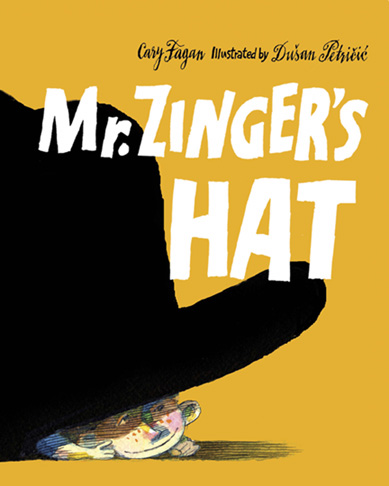 There’s a story I used to read my kids when they were little(r): Mr. Zinger’s Hat.

It’s about a young boy (Leo) and an old man (Mr. Zinger). The boy’s mother has warned him not to bother the old man.

He’s a writer, she explained. He’s busy coming up with his stories.

Leo is playing with his ball against the wall in the schoolyard. An errant bounce sends it hurtling towards Mr. Zinger, knocking off his hat.

The hat gets blown by the wind, and Mr. Zinger asks for the boy’s help in retrieving it.

Finally, Leo catches up with the hat and returns it. Feigning amazement at why his hat took off like that, the old man sits down to ponder and asks the boy to join him.

Mr. Zinger takes a look inside (Leo peering in beside him): “Let’s see… Once upon a time, there was a man,” Mr. Zinger began.

“Could it maybe be a boy?” asked Leo.

Mr. Zinger scratched his head. “Why not? He was rich…”

The story grows from there, with Mr. Zinger guiding/prodding/indulging/fostering Leo’s role in the creation of this particular tale.

My kids love it. Especially my son. He had been given a peek behind the curtain—an insider’s view behind the scenes—and suddenly became aware of how creative storytelling works.

Demystified, his mind boggled at the potential: anyone can tell a story. Which ones could he tell?

We Are All Storytellers

And while we are all storytellers, and have stories to tell, the art, craft, and strategy of storytelling are constantly changing.

In some ways making it easier to tell stories (technology and accessibility), and in others harder: with so many stories and myriad ways of telling them, getting someone to pay attention to your story isn’t easy.

That said, none of this is new. It’s never been that easy.

Whether you’re writing a blog post, a news article, a novel, posting a tweet or sharing something on Instagram, you’ve never been able to assume an audience, much less engagement.

The State of Storytelling

“The notion of storytelling hasn’t changed but the mediums through which we tell the stories have. With the advent of social and ever-evolving consumer attention, you now have to tell a story in new and interesting ways, be it six seconds or 60.

And he’s right. Up to a point. We should ever be striving to tell stories in new and interesting ways.

But we should also be striving for creativity. Nothing says that marketing content and fictional prose can’t work together. Does it? Did I miss the memo?

More on creative storytelling in a bit.

What Were You Saying?

My biggest issue with storytelling in the here and now is the assumption that everyone’s attention span is increasingly (decreasingly?) infinitesimal.

According to the studies, that’s true. Our attention spans are shorter.

But does that mean we abandon longer forms of content?

Is the goal to parse the message into bite-sized pieces? To tell that part, or the whole story, in six seconds? Sixty?

Epic fantasy novels (often close to 1,000 pages long, such as The Game of Thrones), movies, and podcast content are all stretching the limits when it comes to length.

And yet their popularity, albeit in niche groups (raises hand), is huge.

Each episode of Season 1 of Serial was approximately 40 minutes long. And companies such as MailChimp and Squarespace reaped the long-format benefits.

Clearly, we can manage to focus our goldfish-like attention on longer-form content, especially when it comes to entertainment.

So, what is the problem?

Longer-form content is trending, according to Ann Handley, noting that “writers who write ‘big’ blog posts are twice as likely to report strong results.”

She references Andy Crestodina’s Annual Blogger Survey, which supports the statement, albeit with an important caveat:

Careful with this data. This doesn’t say that long posts are always better. But it does show that greater investment correlates with higher ROI.

Which makes sense. I can write some VERY long blog posts. That’s not to say that they’re any better than my shorter ones.

So it’s not length (necessarily). But there is something about an investment of time, from both the content creator and the audience, that can speak to effectiveness.

Regardless what the statistics say/cite about our attention spans, we crave stories. We crave creative storytelling, and that’s where I see the exciting changes happening.

Enter platforms such as Wattpad.

Wattpad, the company, aims to “entertain and connect the world through stories.”

They have an eponymous app that, in a world of eight-second attention spans, is home to “a community of more than 65 million people who spend more than 22 billion minutes a month engaged in original stories.”

Some are calling it a “digital literature app,” but it’s more than that. It’s a writer’s playground, home to wildly original content, but also some pretty amazing fan fiction series, like 50 Shades of Drake (you know you want to read it).

It’s clear that users enjoy the Wattpad experience. They spend an average of 30 minutes per session on the platform.

As far as what the platform does, it harks back to Mr. Zinger.

We are Leo, and Wattpad is a younger, hipper, Mr. Zinger reminding us that we can tell our own amazing stories. Coaxing us to do just that.

Which is not new. Wattpad isn’t forging a new path. They’re paving the old one, making it easier and more accessible.

As content consumers, that’s great, but this type of creative storytelling has also presented an opportunity for marketers and brands.

We are crowdsourcing story creation to our larger community these days by way of large-scale writing contests.

Further—Lionsgate wanted to go deep into the theme of Kindness for its movie Wonder.

So we asked our entire community to create stories where kindness prevails.

We then took a data-centric view to determine the three top stories (out of ~1,200) that were the most engaging and enabled Lionsgate to own these stories and its connection to the movie through three branded short films.

Previously, AT&T wanted to build awareness around the perils of texting and driving.

So, Wattpad commissioned Anna Todd to write a serialized fictional story with a texting and driving theme.

When we talk about influencers in social media terms, we often refer to followers (tens of thousands to millions) and engagement.

When Wattpad refers to influencers, they speak in terms of reads. In the billions.

Anna Todd is one of the platforms most influential creators right now.

She created After, a series of five stories that have been read more than 1.5 billion times on Wattpad.

The series of five books has more than 1.5 billion reads, and Todd just got a movie deal.

In influencer marketing terms, we see stories like Weeping Willow—a gripping original story (in partnership with AT&T: “Eyes on the Road. Not on your phone”) cautioning readers about the consequences of texting and driving.

Interstitial ads within the story drove to official AT&T “It Can Wait” campaign videos.

The result? Ninety-seven percent (that’s pretty close to 100) of Weeping Willow readers said that they would now be more likely to ignore their phones while driving.

Despite the fact that I’ve been a fan of Wattpad for some time (go Canada!), I’m only just hearing about Tap by Wattpad, and Chat Fiction in general.

But now that it’s on my radar, I’m fascinated by it.

If like me, you’re still, as yet, unaware of Tap or chat fiction in general, in short, they’re serialized stories told through text (you probably could have guessed as much).

But that just scratches the surface.

Tap itself goes beyond text, incorporating sound (effects and voice messages), video and Facetime-like messages. In some cases, audiences are given a choose-your-own-adventure style ending.

From a pure storytelling perspective, I love the idea of extending and/or supplementing formats.

From a marketing perspective, the implications are also pretty cool.

Specifically, the producers of the movie A Quiet Place worked with Wattpad to generate awareness.

The result was a combination of serialized fiction on Wattpad:

Five Wattpad influencers wrote short stories inspired by A Quiet Place, which was turned into a horror anthology hosted on the platform’s @fright profile.

Targeted video ads were then placed within these ‘edge-of-your seat’ stories.

In tandem, on Tap:

They created a custom chat style story incorporating GIFs and image stills from the movie.

The story ended with a 15 seconds trailer encouraging people to go watch the movie on release day.

The results: 11 million views of the A Quiet Place trailer by Wattpad’s Horror and Thriller fans, and almost three million engagements (taps and views for the Tap Story and custom Tap teaser video).

If someone points to another statistic highlighting our fractured and diminishing attention spans, I’m going to ask them what podcast or book they’re reading.

I’m going to ask them if they were able to sit through the latest cinematic blockbuster, or binge-watch season two of Luke Cage (that last one might just be me).

As ever, the issue is clutter and quality of content, not length.

Hitting that emotional chord, or finding that “just right” format for your message is key, but being creative in our storytelling is paramount.

Instagram is a great example. It’s a visual platform. A picture is worth a thousand words, they say.

Admittedly, from a marketing and communications perspective, this isn’t storytelling so much as it is advertising and sponsorship, but it is using creative storytelling to reach and engage an audience.

In that vein, I asked Mike Schaffer, digital SVP at Edelman, his thoughts:

A good rule is that content should be as long as it needs to be to effectively and efficiently tell the story you want to tell to the audience that needs to see or hear it.

Can you tell the story in a 10 second video? Film it.

Do you need an entire microsite? Build it.

Do you need a long-form media piece? Pitch it.

Invest more time in making content that matters to the target audience and less worrying about if it’s “on-trend” in length.

It’s all about quality and investing the time, and recognizing that there is a story to be told.

Leo isn’t sure that he has a story to tell, but through Mr. Zinger’s encouragement, he ends up creating one that’s all his, without even knowing it.

What stories do you have to tell?

Whether you’re telling stories for yourself, your company, or a client, there are creative storytelling methods yet to tap.

Technology provides us with the opportunity and accessibility. I challenge you to find new ways to tell your stories. Share them with us here, or in the Spin Sucks Community!