A few nights ago, former George W. Bush speechwriter and senior editor of The Atlantic, David Frum, had a little fun with he who shall not be named.

Nobody could have known the presidency was hard.

As Newt Gingrich pointed out, nobody could have known that the president is sometimes criticized and occasionally does not get his own way

Also , nobody could have known that 2 year old tweets are retrievable

Also , nobody could have known that 2 year old tweets are retrievable

And then Laura Petrolino and I had a little fun with it (we could have done this all day…there is certainly plenty of fodder): 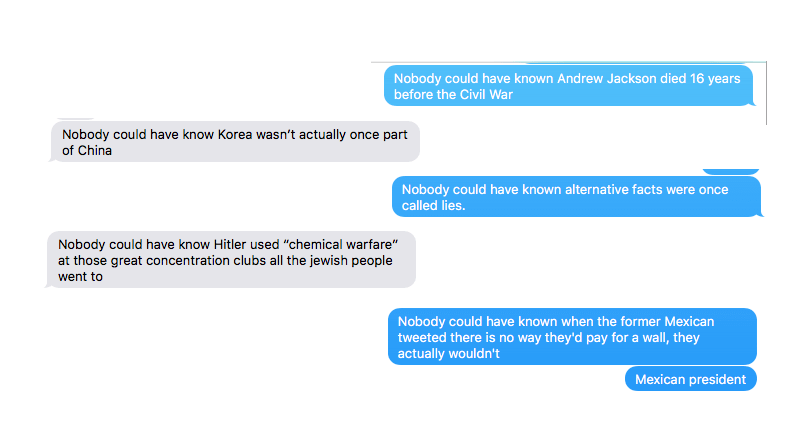 When Untrue Claims Become a Crisis

We live in a strange, strange continuum where the president of the free world complains that the job is harder than he anticipated.

He also clearly failed middle school history, doesn’t like to be stood up to by journalists, and relies on Twitter as his communications tool of choice.

And, because of this culmination, because of #alternativefacts, and because of his assertion that media outlets are spreading false information, we’ve seen brands big and small have to prepare for a new communications fire drill…

…being the target of fake news.

For most, fake news conjures up a vision of Macedonian website purveyors combing forums for salacious and inflammatory conspiracy theories and rumors to post on their websites.

For the most part, this isn’t the fake news you have to increasingly fight.

And, thankfully, most of us won’t have to deal with an angry commander in chief who will take to Twitter to put us on notice.

Instead, the fake news more of us are likely to face will come in the form of untrue claims made by competitors or disgruntled former employees and bold-faced lies from someone with an axe to grind.

Since January 20, CNN is in the middle of a fake news storm.

Soon, other news outlets picked up that claim and published their own anti-CNN commentaries.

CNN did what you’d hope a reputable media outlet would do: They commissioned a survey.

The wanted to see if the American public agreed with his assertions, and if their brand had been tarnished.

They then shared the results of this survey widely.

When fake news targets your organization, begin with any internal data or resources you can share to support your position.

But don’t stop there.

Identify ways to gain third-party validation for your response.

It’s not often the case, but there are times when fake news can become a PR boon.

It’s unlikely the social media representative at Wendy’s who responded to the untrue assertion that their beef had to be frozen had any idea how the brand’s response would go viral.

But the sassy banter between the brand PR account and their detractor resulted in widespread media coverage and significant social media engagement.

The spunky replies felt on-brand and authentic to Wendy’s fans, and caused them to be an unlikely, but effective brand builder.

If you find yourself in a similar spot, think about your brand’s personality and voice, and identify how they can be used as an asset in responding to fake news attacks.

Know When No Response is the Best Response

Fake news doesn’t have to come from an advertising-driven website looking for pageviews.

It can also come from a celebrity or influencer misconstruing something they’ve read or heard.

It can also come in the form of influencers to criticize a company, often while making false assertions presented as facts.

This has happened to a number of established brands during the past few months.

The New York Times, Vanity Fair, Nordstrom, and even Meryl Streep have been under attack from none other than he who shall not be named.

Yet, unlike many of the other companies, Nordstrom didn’t respond to or acknowledge the mention.

As a brand whose reputation is built on exceptional customer service, responding to this sort of criticism would have been out of character.

Clearly, Nordstrom was also aware a number of their customers are likely Trump supporters who would be upset by any response other than backing down from their decision.

Their decision to not reply didn’t stop the anti-Nordstrom sentiment, but it did lead to a surge in social media support from brand fans.

While it’s rare we’d counsel a client to say “no comment” in a crisis, this is an example of when it is the right decision.

A no response approach is appropriate if the following is true of the situation:

It’s an interesting world we live in right now.

Who would have thought, just a year ago, we’d have to worry about a 5 a.m. Twitter storm from the leader of the free world, or that it might involve our organizations?

But here we are, for better or worse, which means you’d better plan for the inevitable now.